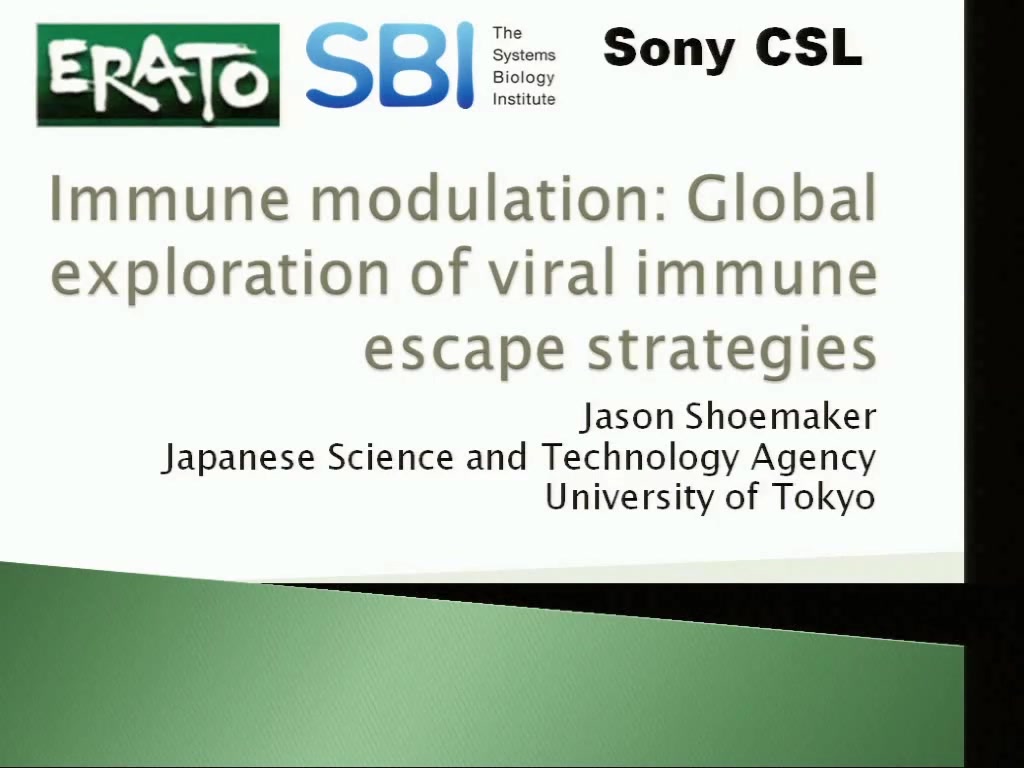 Recent evidence suggests that an overly ambitious immune response may be the primary factor that determines influenza severity [1], yet the definition of what is a reasonable immune response remains vague. Seasonal influenza, alone, is responsible for approximately 30,000 deaths in the US each year. With the recent swine origin influenza virus (SOIV) pandemic and the fear that highly pathogenic avian influenza strains (H5N1) could attain human-human transmissibility, there is a growing interest in identifying host-viral interactions. A network understanding of the viral-host interaction will greatly facilitate the identification of immune escape strategies employed by influenza viruses. Furthermore, these in silico models may be employed to identify drug targets which may selectively alter viral replication capacity or mediate collateral damage from an aberrant immune response [2]. To date, we have created models of viral replication in epithelial cells and inter-cellular communication between lymphocytes against which microarray and protein data can be interpreted. Applying mRNA and protein data to these models, down-regulation of the chemokines responsible for directing lymphocyte chemotaxis has been identified as a potential immune-escape strategy for highly-pathogenic influenzas. In silico models of viral replication and immune signaling were constructed to predict the chemokines released from infected cells and the impending effect of the chemokines on the recruitment and chemotaxis of lymphocyte cells, respectively. Currently, the viral replication consists of approximately 200 proteins and 320 host-viral, protein-protein/protein-RNA interactions. Upon infection, the virion fuses with the cell membrane, resulting in transportation of the viral ribonucleoprotein (vRNP) complex to the nucleus where viral replication begins. While several intra-cellular, host defense pathways are circumvented by the viral proteins, infection still results in the production of chemokines. These chemokines act as the input into the immune signaling model and are responsible for the migration of lymphocyte cells (T/B cells, natural killer (NK) cells) as well as directing lymphocytes to the site of infection. Chemokines emanating from infected epithelial cells attract NK cells and macrophages. As macrophages approach the site of infection, they release additional chemokines which attract T and B cells. In an ideal immune-response situation, this communication results in the recognition and destruction (via apoptosis) of viral-infected cells. The viral replication model has been constructed using CellDesigner, and equations are being developed to better explain to complex behaviors observed in immune-related, intra-cellular signaling. The immune signaling model currently consists of 8 states in which transport to the site of infection is modeled as different states. To explore differences in the immune response to particular influenza strains, mRNA expression and protein levels were measured in bronchial epithelial swabs and sera, respectively, for monkeys exposed to a seasonal influenza, the SOIV, and an avian H5N1 strain. Data was collected from 12 monkeys at days 1, 3, 5, and 7 post infection (p.i.). Clustering of the microarray data, interpreted using GO analysis, showed that the behavior of key biological process, such as cell cycle and RNA production, hijacked by the viruses during infection, is highly conserved between the strains. Furthermore, immune related genes are up regulated day 1 p.i. for all three strains. Protein data in the blood also showed little difference between the infection types with one notable exception. Key interleukins known to increase immunoglobin secretion could not be detected in SOIV samples. This may explain the why SOIV can achieve higher viral loads that seasonal influenza in lung tissue. Microarray data reveals a possible immune-escape mechanism for highly pathogenic influenza infections that's physiological effects can be correlated with the immune signaling model. At days 5 and 7 p.i., the H5N1 infected data shows a sudden down-regulation of many of the immune signaling genes. Interpreted through the immune signaling model, the effect of this observed regulation would be the continued induction of lymphocyte recruitment but a strong inhibition of the coordinated chemotaxis required to bring the lymphocytes to the site of infection. As viral replication continues, large populations of lymphocytes can accumulate, leading to apoptosis and inflammation in the tissue without abating the infection. This prediction from the model is consistent with several experimental studies [3] and histopathological studies are underway to provide direct observational evidence. The models of the intra and inter-cellular immune response provide several advantages to drug research and development. As more viral-host interactions become known, it is hoped that pathway redundancy may allow for the identification of host pathways which are critical for viral replication yet temporarily dispensable for the host. Furthermore, drug regimen strategies which mediate the immune-response instead of the viral-replication mechanism can be explored. Should similar immune-escape strategies be observed in other highly pathogenic strains, these drug regimens may proof to be more robust than many modern treatments as the virus itself is not being targeted. In conclusion, in silico models of the immune response provide an invaluable platform for elucidating viral infection strategies and for drug target exploration/strategy development. Currently, several projects in our lab focus on many aspects of modeling the immune response. Data-driven and literature-driven methods of protein-protein interaction network elucidation along with protein pull-down essays are being used to explore for additional host-viral interactions. Furthermore, better modeling platforms are being designed that can account for both biochemical modeling and mechanical motion (endocytosis and chemotaxis). As predictive capacity increases, these models will provide valuable insights into the workings of the immune response and the immune-escape strategies of other viral/bacterial infections. 1. Peiris JS, Cheung CY, Leung CY, Nicholls JM: Innate immune responses to influenza A H5N1: friend or foe? Trends Immunol 2009, 30(12):574-584. 2. Kobasa D, Jones SM, Shinya K, Kash JC, Copps J, Ebihara H, Hatta Y, Kim JH, Halfmann P, Hatta M et al: Aberrant innate immune response in lethal infection of macaques with the 1918 influenza virus. Nature 2007, 445(7125):319-323. 3. Rowe T, Leon AJ, Crevar CJ, Carter DM, Xu L, Ran L, Fang Y, Cameron CM, Cameron MJ, Banner D et al: Modeling host responses in ferrets during A/California/07/2009 influenza infection. Virology 2010.

Preview Presentation:
Presenter(s):
Jason E. Shoemaker
Once the content has been viewed and you have attested to it, you will be able to download and print a certificate for PDH credits. If you have already viewed this content, please click here to login.

A Multidimensional Spectroscopy Approach for Protein Characterization
Aggregation and oligomerization processes lead to structural changes in proteins that have high relevance in the biomedical and biotechnology fields...
Short and Long-Term Changes in Circulatory Protein and Cytokine Profiles Following Burn and CLP Treatments
Burns and trauma lead to a hypermetabolic state characterized by an accelerated breakdown of skeletal muscle protein in the patient which leads to muscle...