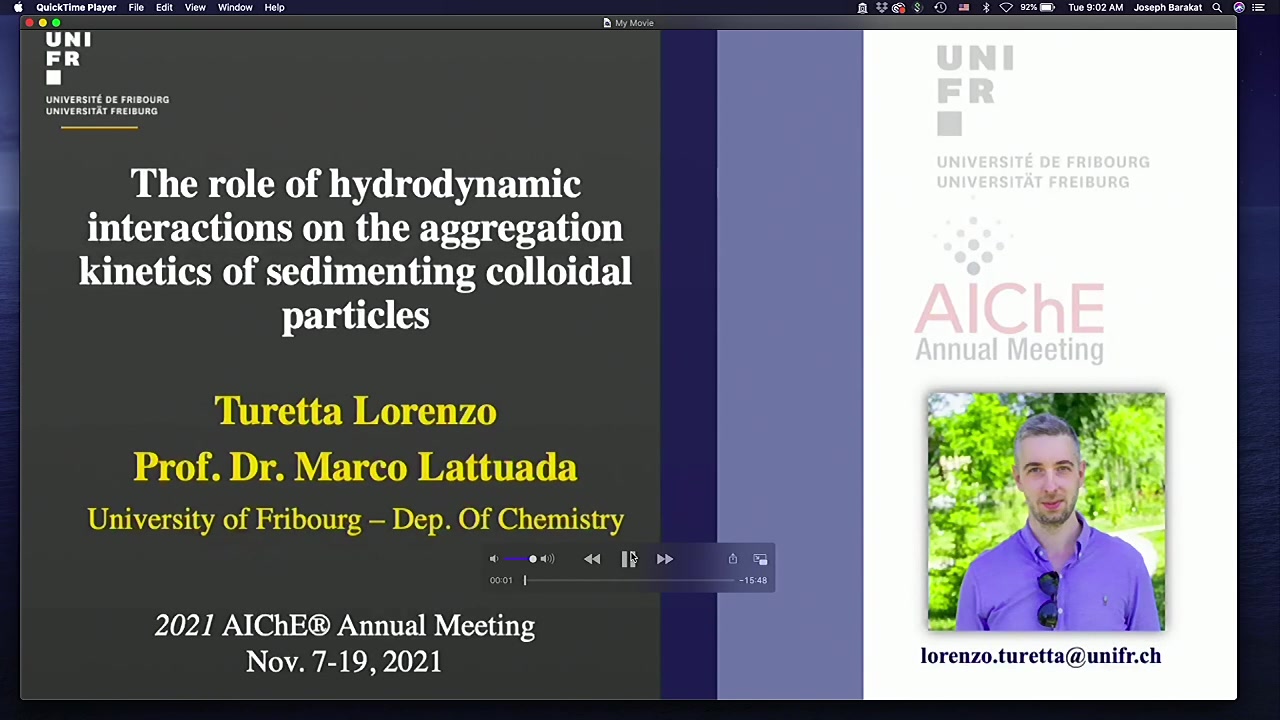 The aggregation kinetics of sedimenting colloidal particles under fully destabilized conditions has been investigated using the recent PSE algorithm (proposed by Fiore et al.1) for the Rotneâ€“Prager-Yamakawa (RPY) approximation of long-range Hydrodynamic Interactions (HI), over a wide range of particle volume fractions (Î¦) and Peclet numbers (Pe). Fast Lubrication Dynamics2,3 (FLD) and simple Brownian Dynamics (BD) methods for large-scale simulations have also been employed to provide a quantitative comparison of the different methods on the resulting aggregation dynamics.

It has been observed that, at low particle volume fractions, long-range hydrodynamic interactions lead to faster and more pronounced aggregation rates, manifesting themself with an explosive-like cluster growth after a given time. On the contrary, simulations employing only short-range hydrodynamic interactions (such as FLD) and BD, which neglect completely hydrodynamic interactions, are completely incapable of predicting this very rapid kinetics, because sedimentation simply leads to all clusters to move vertically with identical velocity. However, dissipative lubrication forces play a key role at high concentrations and in the early stages of the aggregation process, when aggregation mostly occurs between primary particles and diffusion is the predominant mechanism governing aggregation.

From simulations employing the RPY approximation of HI, an increase in the particle volume fraction leads to a substantial increase in the rate at which the dimensionless number of clusters decreases over time. Additionally, at specific conditions, the curves show an inflection point, followed by a very rapid cluster consumption, which coincides with the time at which a gel point is formed, consistently with PBE simulations in diffusion-limited cluster aggregation (DLCA) without sedimentation4. Similar results were observed as the Peclet number, which characterizes the strength of sedimentation to that of diffusion, increases. Time evolution of the average cluster size and radius of gyration show that sedimentation has a strong accelerating effect on the clustering kinetics and a significant influence on the structure of the formed clusters.

It was also observed that as Pe increases, the anisotropy of the resulting clusters decreases, suggesting that denser clusters with spherical-like morphology are formed. This is mainly due to the high convective motions generated during sedimentation at high Pe, leaving clusters exposed to the flow field with the possibility to rearrange and reorient. However, the effect induced by Pe becomes negligible at high particle volume fractions (Î¦=0.2) when particles are in close proximity, most likely indicating that in such conditions concentration instead of sedimentation is the predominant mechanism controlling the process. Moreover, for dense dispersions of particles (Î¦â‰¥0.05), lubrication is of crucial importance for assessing the role of tangential inter-particle interactions on the cluster microstructure.

In the majority of cases investigated in this study under various flow conditions and particle concentrations, long-range hydrodynamic effects have been of crucial importance for the understanding of the aggregation dynamics of settling clusters, revealing important features of the complex interplay between sedimentation, colloidal interactions, and hydrodynamics and providing a valid alternative to the more computationally expensive Stokesian Dynamics technique5.

Preview Presentation:
Presenter(s):
Marco Lattuada
Lorenzo Turetta
Once the content has been viewed and you have attested to it, you will be able to download and print a certificate for PDH credits. If you have already viewed this content, please click here to login.

Advanced Modeling for Structured Packing Development - a: Hydraulics
Semi-empirical models such as the Rocha-Bravo-Fair, Delft, and Billet-Schultes models represent the current state-of-the-art in predicting the hydraulic and...
Greasing Proteins Wheels: Genetically Encoded Amphiphiles with Programmable Architecture and Assembly
Advances in recombinant DNA technology have expanded our ability to design and produce protein-based materials with superior control over the biomacromolecule'...