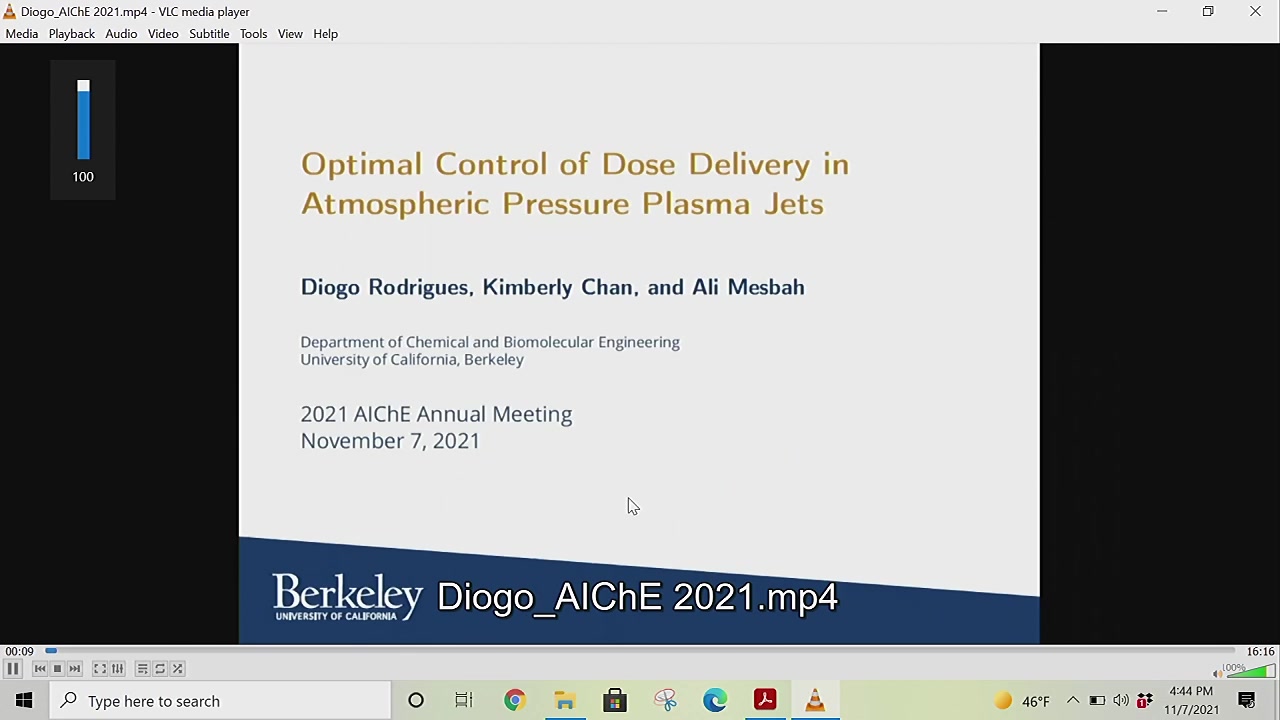 Atmospheric Pressure Plasma Jets (APPJs) have been shown to be uniquely promising for treatment of pressure- and heat-sensitive (bio)materials. This is due to the non-equilibrium nature of the generated plasma (i.e., the electron temperature is 1-5 keV, while the gas temperature is close to room temperature), which is a highly reactive medium [1]. Although the generated plasma is difficult to model, it needs to be operated in a safe, effective, and time-efficient way, otherwise surface damage may occur due to the cumulative and nondecreasing effects of the APPJ, or the treatment time may be too long. This so-called dose delivery problem is challenging because the operation is sensitive to changes in the surface properties, tip-to-surface distance, ambient gas conditions, and plasma behavior [2]. Recent work has shown that model predictive control (MPC) facilitates reproducible and effective operation of APPJs. However, MPC generally requires solving an optimization problem at each sampling instant, which can restrict its application [3]. Fast MPC strategies address this problem, but they either provide no guarantee of constraint satisfaction or require offline computation of robust control invariant sets [4,5]. Moreover, despite the receding-horizon nature of MPC, it does not guarantee convergence to an optimal solution for the true system.

This talk will present an approach for the dose delivery problem that does not require solving any optimization problem online and converges to an optimal solution for the true system. The key contribution is the proposed combination of adaptive control and optimization methods that enables effective handling of structural plant-model mismatch in this application to APPJs, for which accurate models are typically unavailable.

The APPJ and its thermal effect are described by a system where the dose in cumulative equivalent minutes (CEM) and the surface temperature are the states, the temperature is the output, and the applied power is the input. It is assumed that a generic first-principles model of the APPJ is known, but a part of the temperature model is subject to uncertainty due to its unknown structure.

One can then formulate the dose delivery problem in terms of a generic optimal control problem (OCP) for this system, which includes a terminal cost, terminal constraints, and input and state path constraints. By using the necessary conditions of optimality given by Pontryagin's maximum principle, we can show that singular arcs are not possible, independently of the model uncertainty. The optimal input is then composed of a sequence of arcs where each arc can be 1) input constraint-seeking, such that it is determined by an input bound, or 2) state constraint-seeking, such that a state constraint remains active [6]. Hence, there is a finite number of arc types from which arc sequences can be formed. It follows that the number of plausible sequences is also finite.

However, the explicit form of the time derivatives of the state constraints is not exactly known due to model uncertainty. Thus, to implement a state-constraint seeking arc, one needs to track a constraint via feedback control. In particular, we consider a single state constraint that consists in an upper bound for the temperature. Moreover, the model in the OCP formulation is not an exact representation of the true APPJ due to plant-model mismatch, thus the solution to that OCP is not the true optimal solution. Hence, we propose a control strategy via feedback linearization and derivative estimation for constraint tracking and an adaptive algorithm based on modifier adaptation to compute the optimal solution to the OCP for the true system despite the presence of plant-model mismatch.

By using the proposed adaptive algorithm, the cost for the true system approaches its optimal value after few iterations while the constraints become active, which indicates convergence to the optimal solution to the dose delivery problem. For each point evaluated by the algorithm, the proposed control strategy successfully tracks the constraint in the second arc. Hence, despite the existence of disturbances and structural plant-model mismatch, the combination of the adaptive algorithm with a control strategy for constraint tracking enforces convergence to the true optimal solution.

Preview Presentation:
Presenter(s):
Kimberly Chan
Ali Mesbah
Diogo Rodrigues
Once the content has been viewed and you have attested to it, you will be able to download and print a certificate for PDH credits. If you have already viewed this content, please click here to login.