Effects of Endocrine Disrupters on Adipose Metabolism and Inflammation 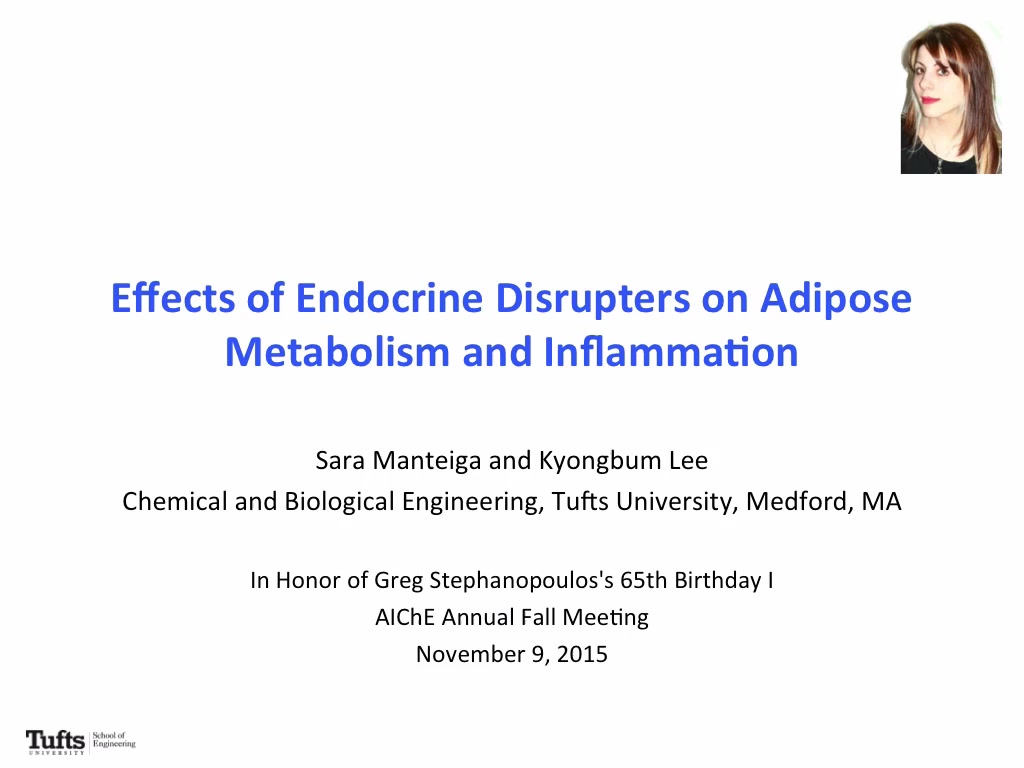 Contamination of the environment with organic pollutants has emerged as a significant public health concern due to the pervasive nature of these contaminants. Epidemiological studies have linked chronic endocrine disrupting chemicals (EDC) exposure to adverse effects on reproduction, development, and more recently, metabolic diseases [1]. Since Baillie-Hamilton first suggested a link between obesity and synthetic chemical production in the US [2], a growing number of studies have reported that perinatal exposure to certain EDCs, termed obesogens, could predispose the body to weight gain through an adipogenic effect that leads to increased fat mass. To date, studies have mainly focused on the impact of suspected obesogens on stem cell fate and tissue development. Less attention has been paid to clarifying whether these chemicals play a causal role in metabolic disease by disrupting the metabolic regulation of mature adipocytes. For example, EDCs could impair the ability of adipocytes to sequester fatty acids or activate pro-inflammatory pathways, both hallmarks of obesity-related metabolic diseases. Studies have shown that EDCs can bind to nuclear receptors (NRs) in a variety of tissues to disrupt the normal function of the endocrine system [3]. One such NR, peroxisome proliferator activated receptor gamma (PPARg), is a particularly promising link between EDCs and their metabolic effects. This NR recognizes structurally diverse ligands, and regulates the transcription of genes involved in lipid storage homeostasis. Importantly, this NR interacts with nutrient sensors such as AMP-activated protein kinase (AMPK) through feedback mechanisms, thus coupling control over metabolism and signaling in adipocytes [5]. We therefore investigated the effects of several representative EDCs in the context of the regulatory subnetwork anchored by PPARg and AMPK, under the hypothesis that EDCs act via both metabolic and signaling pathways to cause inflammation in adipocytes.

To establish that EDCs elicit an inflammatory response in mature adipocytes, we screened for the effects of tributyltin (TBT), bisphenol A (BPA), and monoethylhexyl phthalate (MEHP) using 3T3-L1 cells. Nanomolar doses of BPA, MEHP, and TBT did not affect cell morphology or TG accumulation, but significantly increased expression of inflammation markers such as monocyte chemo-attractant protein 1 (MCP-1). To broadly assess the metabolic effects, we profiled the levels of ~50 intracellular metabolites, and performed a partial least squares discriminant analysis (PLS-DA) on the metabolite data. Latent variable score projections from PLS-DA showed that there were clear differences in the metabolite profiles across the treatment groups. The differences were most pronounced for MEHP treated cells. The corresponding loadings showed that multiple metabolites contributed to the differences, with the majority comprising fatty acid species.

Focusing on MEHP as a potent EDC, we performed a dose response experiment to obtain a more detailed analysis of the metabolic and inflammatory responses. In addition to MCP-1, MEHP treatment increased the expression of CXCL1, IL-6, and TNFα, similar to the effects of the prototypical pro-inflammatory cytokine TNFα. Exposure to MEHP also altered the intracellular FFA profile, raising the levels of both saturated and unsaturated fatty acids. Interestingly, MEHP treatment also increased the intracellular AMP/ATP ratio, suggesting activation of AMPK. We next performed untargeted and targeted proteomics experiments to profile the impact of MEHP exposure on the levels of cellular proteins. The proteomic data indicated that the chemical exposure broadly and significantly altered the levels of enzymes and other proteins involved in regulating the lipid balance in adipocytes. These data were consistent with our hypothesis that MEHP impacts transcriptional/translational regulation of metabolic pathways. Several of the up-regulated proteins were downstream targets of PPARg (e.g. GPDH, FABP4), which supports the involvement of this key transcriptional regulator.

Taken together, our results support the hypothesis that the metabolic and inflammatory responses are coupled, and that AMPK and PPARg act as upstream mediators. Our results also support a mechanistic link between EDC exposure and adipocyte inflammation, which underpins many of the metabolic dysfunctions of obesity.

Preview Presentation:
Presenter(s):
Kyongbum Lee
Once the content has been viewed and you have attested to it, you will be able to download and print a certificate for PDH credits. If you have already viewed this content, please click here to login.

Identification of Cell-Type Specific Transcripts for Informative Diagnostics
The identification of cell-type specific or brain-region specific transcripts adds specificity for the diagnosis of a wide variety of brain disorders, such as...
Multiscale Lung Tissue Simulator for Sars-Cov-2 Infection and Damage
The 2019 novel coronavirus, SARS-CoV-2, is an emerging pathogen of critical significance to international public health. Knowledge of the interplay between...