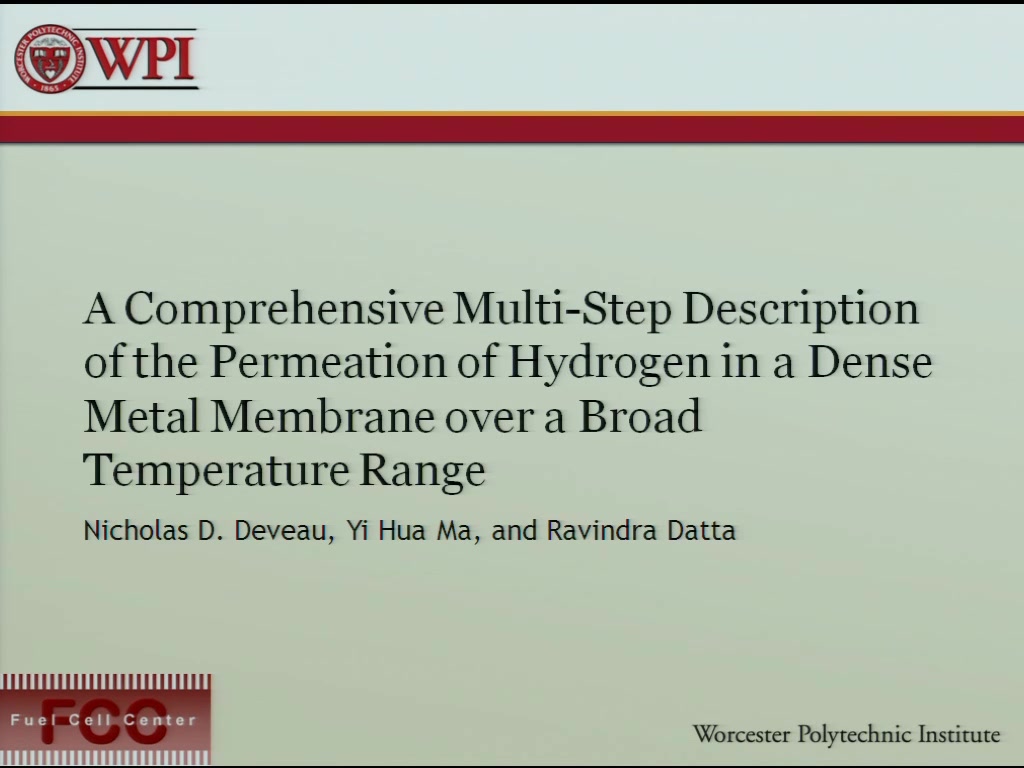 Development of cheaper and more durable dense metal membranes are being sought for generation of pure hydrogen suitable for fuel cells from coal. Toward this end, we have developed a comprehensive multi-step model for describing permeation of hydrogen in such membranes. The various steps include: s1) dissociative adsorption on the surface, followed by: s2) solution and then: s3) diffusion of hydrogen atoms within the bulk metal matrix, and finally: s4) evolution from the bulk to the surface, and: s5) associative desorption on the permeate side.

The efficacy of the model is ascertained by first applying it to Pd and Pd-Cu membranes, for which much literature exists. Of course, for these membranes, typically Sieverts’ law is assumed, which is limited to high temperatures (> 300 ºC) and low hydrogen pressures, when diffusion (step, s3) is controlling, and hydrogen concentration in bulk metal is low. Over a broader range of temperatures spanning the crystallographic phase-transition in the Pd-H and Pd-Cu-H systems, in fact, the slopes are very different at low and high temperatures, and also there is a pronounced peak in permeability in the intermediate temperature range. The latter behavior has not yet been theoretically explained.

Our approach considers the 5-step network in analogy to an electrical circuit and describes well the permeation behavior of hydrogen in Pd and Pd-Cu membranes, including the peak at intermediate temperatures. Further, it can adequately describe the absorption isotherms of the metal-hydrogen system. A comparison of step resistances also allows a systematic reduction to a three-step (adsorption, diffusion, and desorption control) model that is adequate over a broad range of temperatures and pressures.

Preview Presentation:
Presenter(s):
Nicholas Deveau
Yi Hua Ma
Once the content has been viewed and you have attested to it, you will be able to download and print a certificate for PDH credits. If you have already viewed this content, please click here to login.

Equations for Flammability Parameters, Pmax and KG
The maximum pressure of gas combustion, P max , and the deflagration index, K G ,are very important flammability parameters that are used for risk assessment...
Hydrophobic and Hydrophilic Membrane for DCMD: Effect of Non-Solvent Additives and Operation Condition on the Performance
Dual-layer composite membrane is a new design for direct contact membrane distillation (DCMD) with membrane performance potentially superior to that of single...