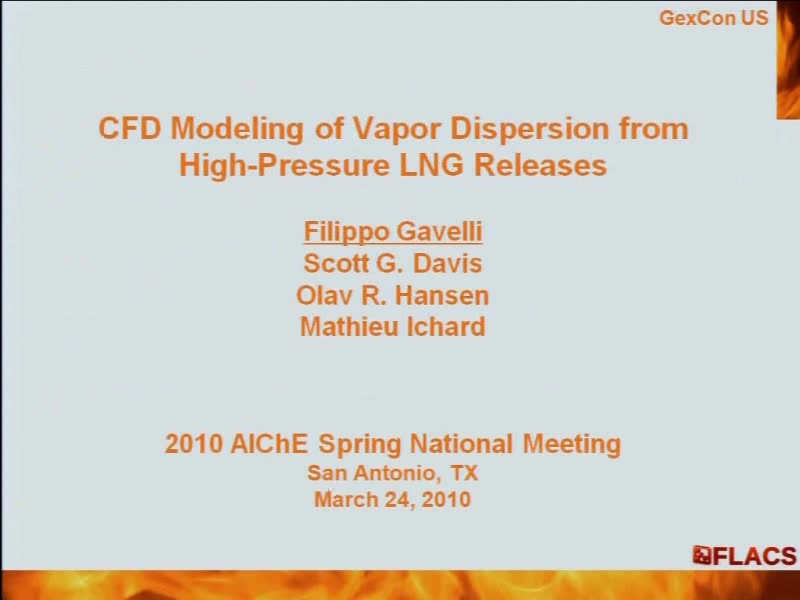 The analysis of LNG hazards, particularly in the context of onshore facility siting, has historically focused on the consequences of atmospheric pressure releases, such as would occur in the event of a storage tank breach. Recently, however, the issue of flammable vapor clouds formed by high-pressure LNG releases has been raised as a potential hazard. LNG terminal owners and operators have, in several instances, been required to demonstrate that the flammable vapor clouds (to the ½ LFL concentration) due to “jetting” and “flashing” LNG releases will not extend beyond the property boundaries. The physical phenomena that occur as pressurized LNG flows from a breach are rather complex and include: flashing (if the pressurized liquid is at temperatures above the atmospheric boiling point), atomization of the liquid stream, evaporation, and eventually deposition on the ground, of the liquid droplets. While certain integral models can accurately predict the behavior of the two-phase jet release, as well as the dispersion of the resulting vapor cloud, those models may only be applied to scenarios without any obstructions such as vapor barriers, flange guards, etc. Additionally, integral models only allow a single, unidirectional jet to be simulated, which makes them ill-suited for complex scenarios, such as a circumferential flange leak. All of these limitations can be overcome by using a CFD model that can simulate the physics of a high-pressure jet release, as well as the dispersion of a dense gas cloud in complex geometries. In this paper, the CFD model FLACS is applied to jetting and flashing LNG releases. FLACS was recently validated against the Model Evaluation Protocol database for LNG vapor dispersion [1]. Additionally, GexCon's R&D activities have recently resulted in the development of a flashing jet module for FLACS, which allows the simulation of the flashed and aerosol components of the jet as it emerges from the breach and interacts with ambient wind and obstacles. The flashing jet module is based on the homogeneous equilibrium model which assumes that the flashed and aerosol components are in dynamic and thermodynamic equilibrium. The paper will discuss the validation of the flashing jet module, and will include examples to demonstrate the applicability of FLACS to realistic scenarios, where simpler models would require severe approximations.

This recording is FREE to members of the Fuels and Petrochemicals Division of AIChE. AIChE members may join the Division for only $10. Join F&PD now and return to this page with your new log-in and you will receive this presentation for FREE.

F&PD Members: Simply click on “click here to buy this archived webcast ” below and your ‘0’ price will appear in your shopping cart.

Preview Presentation:
Presenter(s):
Filippo Gavelli
Once the content has been viewed and you have attested to it, you will be able to download and print a certificate for PDH credits. If you have already viewed this content, please click here to login.

Changes in the Energy Market and Their Impact on the Chemical Industry
Unprecedented volatility in the price of feedstocks and concerns over global warming have spurred the search for economically viable and environmentally sound...
Integrated Hydropyrolysis and Hydroconversion Process (IH2) for Production of Gasoline and Diesel Fuel From Wood, Algae, Cornstover, Lemna, and Bagasse Feedstocks
Experimental results and a process design will be presented for an integrated process which uses hydropyrolysis plus hydroconversion to convert biomass into...