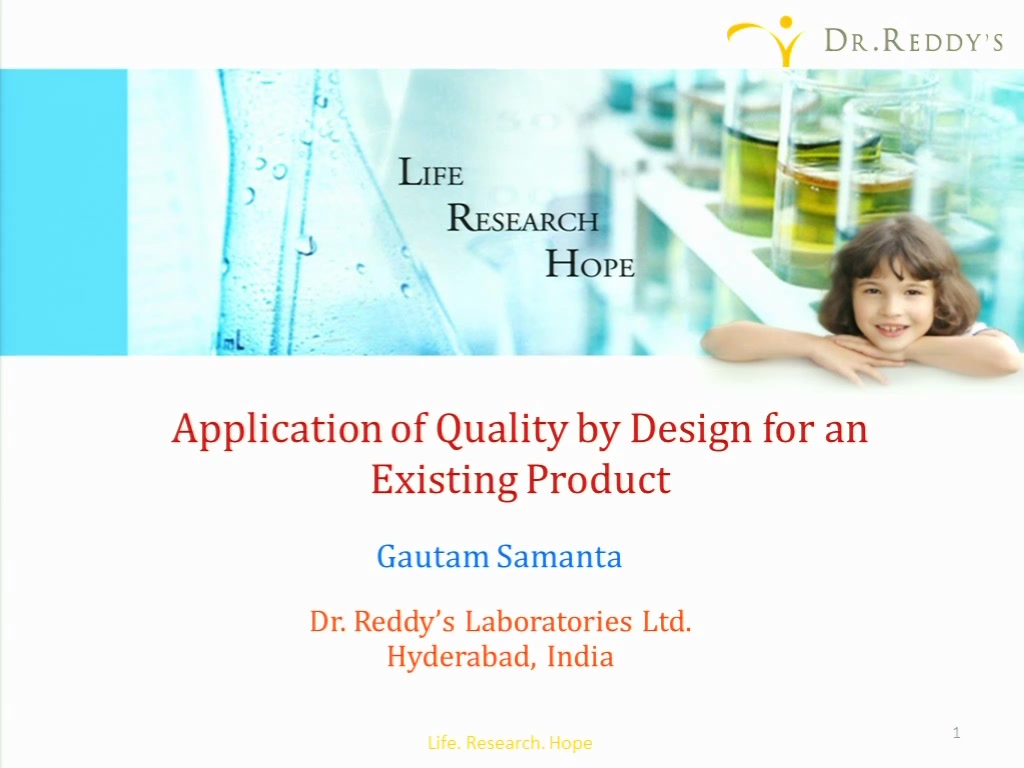 The philosophy of quality by design is all about the patients' need. The designing, developing, and manufacturing of the product must meet those needs. Most of the innovator and few generic companies have adopted the concept of QbD in their product development. Dr. Reddy's Laboratories has started implementing the QbD principles for all new APIs development. The QbD implementation for new products is well documented but not for existing products. The key drivers for the implementation of QbD for the existing products are to reduce variability in the product quality, improve yield, reduce cycle time, solve manufacturing issues, reduce cost of quality, and introduction of real time release testing for manufacturing process.

The objective of this work is to provide a perspective of QbD application for existing API manufacturing where a stepwise reverse QbD approach has been applied. The unique features of this work comprise methodology and implementation strategy in defining design space and thereafter executing the control strategy for consistent production of the API.

Irbesartan is an angiotensin II receptor antagonist used mainly for the treatment of hypertension. Dr. Reddy's Laboratories developed the generic version and filed DMF in March 2009. In stage 1, IRB-1 is formed by reaction between 2 n butyl-4-spiro cyclopentane-2-imidazoline-5-one and 4-bromo methyl-2'-cyanobiphenyl at -5 to -10 °C in the alkaline medium (Figure 1). The reaction time is 2-3 h. In stage 2, IRB-1 is converted to tetrazole by the reaction with NaN3 at elevated temperature and the final product Irbesartan (IRB-2) is obtained after crystallization.

Figure 1: Stage 1 for the synthesis of Irbesartan and the structure of the Dimer impurity (CQA)

In stage 1, there is a significant variation (upto 5%) in the formation of a dimer impurity, which is difficult to remove in the subsequent stages. If the dimer content is more than 1%, significant yield loss occurs for its removal. So the cost of quality is high. The dimer impurity is the critical quality attributes (CQA) in this stage. The QbD principles have been applied to address the issue.

The following stepwise QbD approaches has been adopted:

1.      Historical data and analysis of data to identify the problem

There is a significant variation in the formation of the dimer in the process. So some variables are playing critical role. To understand the variability in the dimer quantity experiments were conducted at pre-determined time under the same experimental conditions.Figure 2 shows the experimental results, which indicate that the formation of the dimer depends on the reaction time. Even within the reaction time 2-3 h, the dimer quantity is varying significantly and the variation is more after 3 h which indicates that reaction time is very critical. The best fit with the data is the third-order polynomial equation (R2= 0.994).

To identify the critical variables the cause-effect diagram (Figure 3) has been used. All material attributes and process parameters have been listed in this diagram. Based on the chemistry knowledge as well as practical experience it has been concluded that material attributes are not responsible for the dimer. So only the process parameters have been considered for risk analysis.

Figure 3: Cause-effect or fishbone diagram for MA and PP to understand the effect on CQAs

In the case of PPs, the first phase is to identify those potential CPPs that may affect the CQAs of the API (i.e., the severity). The second phase of the assessment is to estimate the probability of a parameter affecting the API (i.e., the risk). The parameters with a high probability of influencing the API with enough severity to produce unacceptable API are critical parameters. The overall risk is the combination of severity and probability and risk assessment is the impact of the process on the API. Table 1 shows the risk assessment of the process parameters.

Initially, two-level factorial design was selected and twelve experiments (23 + 4 center points) were conducted in the lab considering three variables and their respective ranges as mentioned in Table 2. The normal plot for the dimer (Figure 4) reveals that all the three variables are making significant positive impact on the dimer formation (NaOH 36%, RPM 21%, and Reaction time 13%). It is interesting to note that the three-variable interaction (ABC) has negative impact (15%) on the dimer formation. Due to significant curvature a central composite design was selected and remaining experiments were conducted.

The data from CCD are fitted to a cubic model (R2 = 0.9999, Adj R2 = 0.9997, Pred R2 = 0.9496, and PRESS = 2.76). Analysis of variance testing (Table 3) confirms the significance of three-factor interaction (ABC), as well as of other terms A2B, AB2, A2C, A2, B2, C2 and two-factor interactions AB, AC, and BC. The three-dimensional surface plot, illustrated in Figure 5 is generated according to the cubical model and demonstrates the dependence of dimer on the amount of NaOH and RPM at optimal level of reaction time (2.5 h). To see the influence of three-factor interaction (ABC), the model term (ABC) has been excluded and the analysis of variance indicates that in the absence of that term almost all the terms become insignificant (Table 4) and the lack of fit becomes significant. This indicates that the three-factor interaction term is playing very critical role in the formation of dimer.

Figure 6 is an overlay plot of yield, dimer, and other QAs, setting the foundation for continued improvement of the process. The yellow region is design space where the desired QA levels will be obtained. Laboratory validation experiments were performed under the experimental conditions (NaOH 1.3 eq, Reaction time 200 ± 10 min, RPM 300 ± 20) chosen from the design space and the dimer (0.29 ± 0.06) and other quality attributes were within the specifications.

Figure 5: Influence of NaOH and RPM on the formation of dimer impurity at reaction time 2.5 h

Does the output from the laboratory-scale multivariate design get reflected during scale-up? It is important to do the appropriate scale-up for the scale dependent variables before manufacturing. Based on the process understanding and criticality a control strategy has been developed to consistently ensure product quality. To control the formation of the dimer in the plant the scale dependent variable, RPM was scaled-up based on tip-speed and control on other variables was achieved through automation. In-process analysis was not available to monitor the formation of the dimer at that time. The consecutive six batches data in the plant indicates that the dimer is under control within the specification (<1%).

The QbD principles provide a structured approach for gaining process knowledge and developing robust manufacturing process. The application of the QbD principles for the existing products is very limited. This has been applied successfully to reduce the variability of the dimer impurity in the process and reduces the cost of quality. On the basis of the process understanding, it has been demonstrated that the control of the dimer impurity can be achieved by controlling the critical process variables.

See more of this Session: Application of Quality by Design in API Process Development
See more of this Group/Topical: Topical I: Comprehensive Quality by Design in Pharmaceutical Development and Manufacture
Preview Presentation:
Presenter(s):
Gautam Samanta
Once the content has been viewed and you have attested to it, you will be able to download and print a certificate for PDH credits. If you have already viewed this content, please click here to login.

Are Unconfined Hydrogen Vapor Cloud Explosions Credible?
A question is frequently raised by owner/operators of chemical processing and refinery sites as to whether unconfined hydrogen vapor cloud explosions can...
Right from the Start: Mistakes to Avoid While Planning Capital Projects
Proper planning of capital projects is critical to final outcome. To achieve a project’s goals with respect to cost, schedule, quality, and operation, project...