Towards an integrated sugarcane biorefinery: from hemicellulose to bioproducts | AIChE
Skip to main content

Towards an integrated sugarcane biorefinery: from hemicellulose to bioproducts 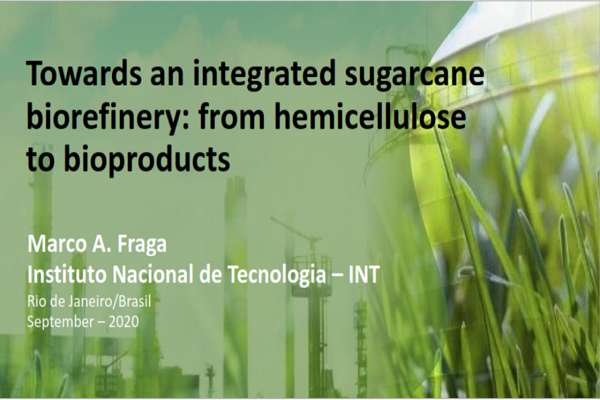 Lignocellulosic biomass is a valuable renewable feedstock, which is largely available worldwide and comes from a wide variety of sources. They are mostly forestry residues or b-products of agroindustrial active sectors whose relevance for a country economy depends on its production profile. In Brazil the agroindustry of sugarcane is a quite significant economical activity. Nowadays, around 300 sugarcane processing units are operating in Brazil and they are able to process around 620 million tons of sugarcane per year, which leads to a considerable amount of lignocellulosic residues.

Lignocellulose is typically composed of carbohydrates (cellulose and hemicellulose) and lignin, macromolecules that can be converted into platform molecules for the production of high-value-added chemicals. While C6 sugars released from cellulose have been mostly aimed for 2G ethanol production, hemicellulose-derived monosaccharides appear as very important feedstock to synthesize green chemicals. Indeed, their conversion into more valuable compounds in a 2G ethanol integrated production model would provide an additional income, leading to a cost-competitive biofuel.

Hemicellulose is the second-most abundant carbohydrate yielded from fractionation of lignocellulosic biomass, being mainly composed of a mixture of C5 and C6 sugars, which are easily unlocked by hydrolysis. Xylose is the most often primary monosaccharide, which makes it a target molecule to be transformed into alternative biofuels, biofuels additives and biobased products.

So far, xylose is mainly industrially used to produce furfural from dehydration using mineral acids as homogeneous catalysts. Over the last years, many efforts have been done to develop alternative heterogeneous acid catalysts to establish a more environmentally friendly process since furfural is certainly the major industrial chemical produced from hemicellulose. Amongst the furfural-derived industrial chemicals, furfuryl alcohol stands out as 60% of the whole produced aldehyde is consumed for the alcohol production. It has to be outlined that furfuryl alcohol is mandatorily produced in a two-step process – xylose dehydration followed by furfural hydrogenation. Furthermore, distinctive catalysts bearing different surface features and operating at distinct conditions are used in those steps. Therefore, some technical difficulties should be overcome to develop a process for the direct conversion of xylose since many competitive side reactions may occur.

This talk intends to discuss theses technologies and to present recent advances to convert xylose into bioproducts over multifunctional heterogeneous catalysts, which allow the reaction to occur in a single step with high selectivity.

Marco A. Fraga graduated with a D.Sc. degree in Chemical Engineering in the area of heterogeneous catalysis at State University of Campinas/UNICAMP in Brazil.

He joined the National Institute of Technology (INT, Rio de Janeiro), a research centre of Brazilian Ministry of Science, Technology and Innovation, in 2000 where he is presently a senior research scientist. Since 2013, he has also been engaged in high-level teaching in the Master´s and Doctoral Program in Chemistry at the Military... END_OF_DOCUMENT_TOKEN_TO_BE_REPLACED

This Live Event was conducted on Wednesday, September 30, 2020, 3:30pm EDT. Registration for this event is now closed.
Once the content has been viewed and you have attested to it, you will be able to download and print a certificate for PDH credits. If you have already viewed this content, please click here to login.