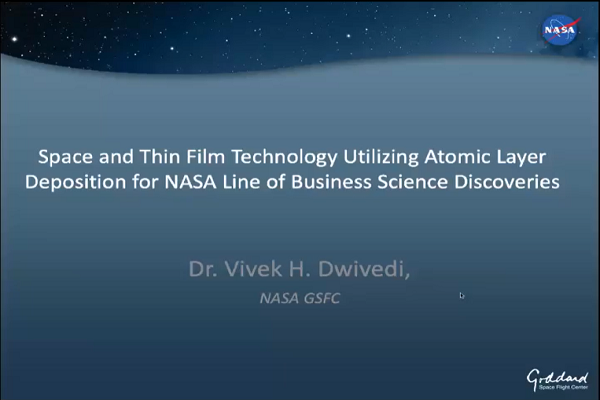 In its 60 years of existence, the NASA Goddard Space Flight Center (GSFC) has developed and launched science and technology missions that have spanned from Earth observing satellites, rovers to Mars, spacecrafts that have touched the sun, reached the farthest dwarf planetoids and have peered at the universe through the eyes of orbiting telescopes.  A key technology development driver in capturing science return from GSFC’s multiple lines of business are discussed utilizing thin film development borrowed from the semiconductor industry.  The multi-billion-dollar semiconductor industry has adopted Atomic Layer Deposition (ALD) for self-assembly and atomic-scale placement.  ALD is a cost-effective nanoadditive-manufacturing technique that allows for the conformal coating of substrates with atomic control in a benign temperature and pressure environment.  Utilizing this tool, astrophysics, helio, and cross cutting applications as related to are presented.

The optical and physical properties of spacecraft radiator coatings are dictated by orbital environmental conditions. For example, coatings must adequately dissipate charge buildup when orbital conditions, such as polar, geostationary or gravity neutral, result in surface charging. Current dissipation techniques include depositing a layer of ITO (indium tin oxide) on the radiator surface in a high temperature process. The application of these enhanced coatings must be such that the properties in question are tailored to mission-specific requirements.  A method has been demonstrated for the ALD of In2O3 and films on a variety of substrates from Si(100) wafers, glass slides, and on Z93P pigments resulting in a direct spaceflight application recently launched to the international space station, ISS. Further applications for metal halides and fluorides will also be discussed for astrophysics and heliophysics based applications.

Stray light optics for space platform instruments require components of the optical bench to be coated with a material that suppresses light reflectance allowing for the imaging of extremely dimmed objects.  Coronagraphs are key heliophysics instruments because they image coronal mass ejections (CMEs), which are the most energetic phenomena on the Sun. CMEs have wide-ranging impact on the heliosphere, from interplanetary spacecraft to Earth-orbiting satellites, communications, and astronaut safety—in short, they are major drivers of space weather. Coronagraphs reveal the structure and speed of CMEs when they are near the Sun and provide essential input to predictive space weather models.  In a typical space-based coronagraph, an external occulter blocks light from the disk of the Sun so that the corona (about a million times dimmer) can be imaged. A promising advance in stray light control is the application of carbon nanotubes.  Carbon nanotubes have shown to be 10 to 100 times blacker than anodized black from the Near UV to Far Infrared, it will be demonstrated that the utilization of ALD to deposit a catalytic layer of Ni can result in the growth of CNTs with enhanced reflectance properties.

We will conclude this talk with discussing how ALD can be applicable as a tool in space.  Large telescopes that could be used for detecting and analyzing Earth-like planets in orbit around other stars or for peering back in time to observe the very early universe may not necessarily have to be built and assembled on the ground. In the future, NASA could construct them in space.  Recently, NASA’s Space Technology Mission Directorate’s Flight Opportunities program selected an “ALD in Space” concept to fly a football-sized ALD chamber aboard a Blue Origin New Shepard rocket.

Dr. Vivek Dwivedi is the Associate Branch Head with the Thermal Engineering and Analysis Branch at the NASA Goddard Space Flight Center focusing on thin film applications and research utilizing Atomic Layer Deposition for thermal, optical, and additive applications.  He received his Ph.D. in Chemical Engineering from the University of Maryland, College Park where his focus was on a novel multi-scale model of an Atomic Layer Deposition Process in high aspect ratio geometries.  Dr. Dwivedi’s research interests include reactor design,... END_OF_DOCUMENT_TOKEN_TO_BE_REPLACED

This Live Event was conducted on Wednesday, October 14, 2020, 3:30pm EDT. Registration for this event is now closed.
Once the content has been viewed and you have attested to it, you will be able to download and print a certificate for PDH credits. If you have already viewed this content, please click here to login.