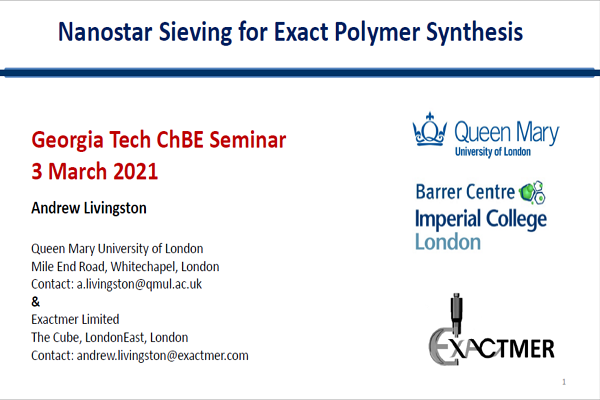 Creating exact polymers with precisely defined monomer sequences is a technology challenge especially important in drug manufacture, where purity and consistency are prized. State-of-the-art industrial solutions are based on two approaches, controlled polymerization (mainly for synthetic polymers), and iterative synthesis (for biopolymers, including peptides, oligonucleotides). When the exact sequence of monomers is crucial, as it is for the burgeoning number of oligonucleotide therapies, iterative synthesis dominates commercial manufacture. There is at present no general approach for exact synthetic polymers such as polyethylene glycols, used for PEGylation and in antibody drug conjugate (ADC) linkers.

Iterative protecting group approaches use coupling/deprotecting cycles in which monomers are added one-at-a-time. Separation of unreacted monomers from the growing polymer at each cycle is the crucial, and hardest, step. Solid phase synthesis has been applied to biopolymers including oligonucleotides and is the dominant technology at present. The attachment of the growing oligo to the solid phase solves the problem of effective separation of molecular debris during the coupling cycle. However, it is difficult to monitor the reaction progress, mass transfer resistances inside the resin make achieving complete reactions difficult, and when it’s time to increase capacity, numbering out of synthesizers or scale up of packed beds is required.

This presentation will describe how highly stable membranes can be applied to solve the separation challenge inherent in iterative synthesis. Polymers are assembled in solution with real-time monitoring to ensure couplings proceed to completion, on a multi-armed star-shaped macromolecule to maximize efficiency during the molecular sieving process. The key to the nanostar sieving process is the separation of the growing polymer star from chain extension building blocks and debris, using a highly selective organic solvent stable membrane. At the completion of the synthesis, the polymers are cleaved from the nanostar complex and recovered.

The synthesis of uniform molecular weight polyethylene glycols (PEGs), which are single mass / unimolecular (EG112 (5kDa) with more than 96% molecular purity) will be described. These can be used for accurate PEGylation of medicines. Sequence-defined versions of PEGS with side-arms at precisely defined locations that can undergo site-selective modification after polymerization can offer utility as linkers and multifunctional carrier molecules, and will also be described.

Nanostar Sieving can also be applied for liquid phase peptide and oligo synthesis. A soluble nanostar is formed with three growing oligos attached. This is readily separated from molecular debris after each coupling using a nanofiltration membrane. The coupling cycles are carried out entirely in the liquid phase. The synthesis of (i) a 2'-methyl RNA phosphorothioate 20 mer sequence using this approach at the 1-2 mmol scale will be discussed, as well as the potential for scale up to metric ton per annum scale. Nanostar Sieving will also be directly compared to Solid Phase Synthesis via the formation of a short 8 amino-acid peptide.

Andrew Livingston studied Chemical Engineering and then worked at an NZ food processing company followed by a PhD at Cambridge UK, and in 1990 joined the Department of Chemical Engineering at Imperial College, serving as Head of Department 2008-2016. From June 2017-May 2019 he was the interim academic lead, the interim Director, of the Rosalind Franklin Institute based at Harwell, UK, and from 1 November 2019 he has been the Vice Principal, Research and Innovation at Queen Mary, University of London.