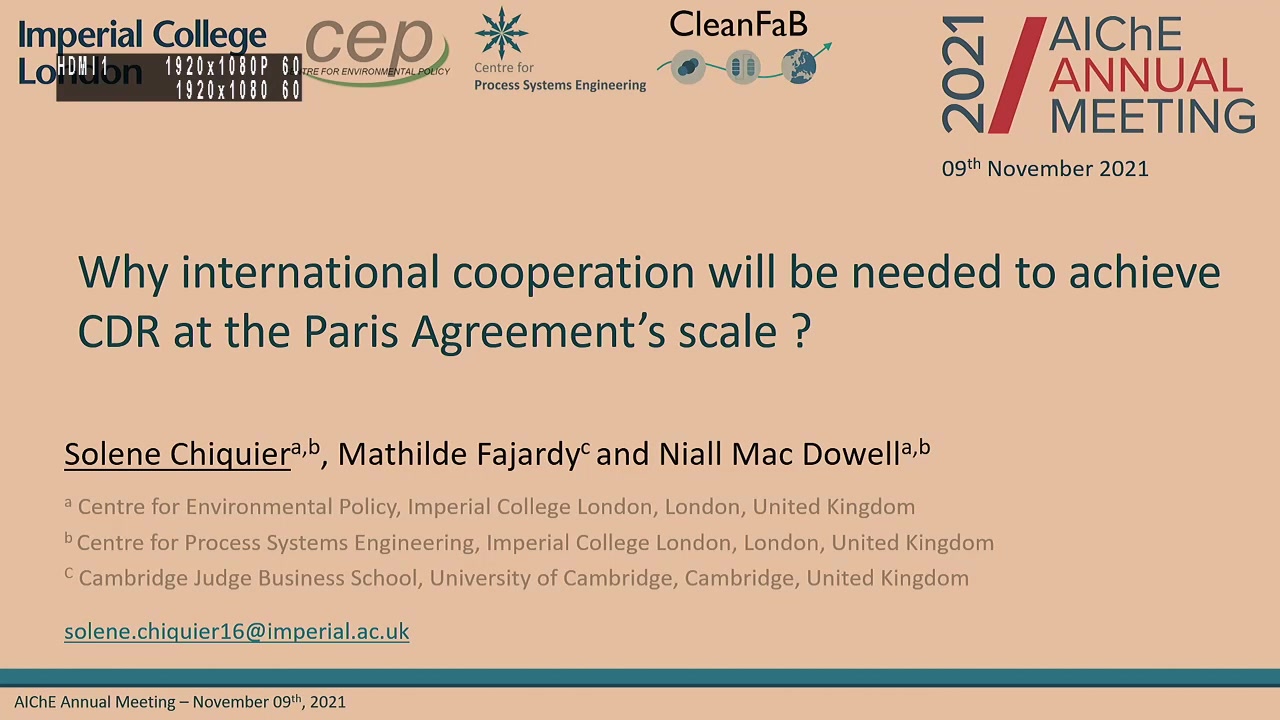 Through the 2015 Paris Agreement, most nations have committed to limiting global warming to well below 2Â°C, and ideally to 1.5Â°C above pre-industrial levels1. To achieve this, the strong reliance on carbon dioxide removal (CDR) â€” the direct removal of CO2 from the atmosphere â€” as part of climate change mitigation pathways in integrated assessment models (IAMs) has been evidenced in the latest IPCC Special Report on Global Warming of 1.5Â°C2. Among almost all 1.5Â°C-consistent scenarios, IAMs have estimated that a cumulative removal of 189â€“1,186 GtCO2Â­ Â­by 2100 would be necessary, relying predominantly on Bioenergy with Carbon Capture and Storage (BECCS) and Afforestation/Reforestation (AR).

Other CDR solutions exist â€” including Direct Air Capture and Carbon Storage (DACCS), ocean fertilisation, enhanced weathering, biochar or soil carbon sequestration â€” but most of them remain largely theoretical. With the exception of AR which has been long well established, only BECCS and DACCS have been conducted at the demonstration scale, yet nowhere near the scales required to deliver the Paris Agreement. Consequently, only DACCS has been recently also considered in IAMs, but other alternative CDR solutions are still generally excluded.

Further, most of the IAMs scenarios have been developed with the objective of finding the least-cost mitigation pathway for limiting global warming by 2100, without considering realistic scale-up rates of CDR solutions, or seldom considering trade-offs with other objectives â€” such as the sustainable development goals for instance. They have consequently raised some concerns about the feasibility and sustainability of the large-scale deployment of CDR solutions in the near future.

Yet, CDR solutions present different trade-offs between bio-geophysical resources (e.g., availability of land and bioenergy, geological sinks for CO2) and socio-economic factors (e.g., low-carbon energy), themselves heterogeneously distributed across the globe. To name but a few, some CDR options, such as BECCS or AR, are land-intensive, and could therefore compete with the food and the biofuel sectors. Some, such as biochar or AR, may present significant co-benefits (e.g., protecting biodiversity, increasing yield, soil carbon and/or other nutrients content), and might be rather inexpensive, but are highly uncertain in term of CDR permanence. Others, lastly, are to this day capital- and energy-intensive with unknown co-benefits, such as DACCS.

Modelling such challenges and opportunities in IAMs is overall all the more difficult, given the current speculative knowledge on alternative CDR solutions, if deployed at scale, and the low granularity (i.e., not spatially-disaggregated enough) of IAMs. Yet it is vital to understand and anticipate the drivers, barriers and potentials of the deployment of CDR options at the national, and even regional level, as it is the level at which climate policy is implemented.

There are two distinct aspects to the MONET framework â€” modelling and optimisation. The MONET modelling framework firstly provides a regionally-disaggregated and time dependent whole system analysis of AR, BECCS and DACCS by evaluating each CDR optionâ€™ resources use (i.e., land and water), energy use or generation, and cost per unit of CO2 removal. Five nations are considered â€” Brazil, China, the European Union (EU-27 and the UK), India and the United States â€” themselves disaggregated into 169 cells.

Secondly, the MONET optimisation framework uses these results to determine the optimal co-deployment of these three CDR options to limit global warming to 1.5Â°C, on a decadal time-step, by minimising the total net system cost, subject to region-specific constraints including: CDR targets; geological CO2 storage availability for BECCS and DACCS; respectively marginal and potential reforested land availabilities for BECCSâ€™s biomass production and AR; respectively afforestation expansion and built rates for AR, and BECCS and DACCS; and water stress constraints. Following the IPCC SSP3 â€” also called â€œmiddle of the roadâ€ â€” scenarioâ€™ global cumulative CDR target of 407 Gt of CO2 removal by 2100, we apply the responsibility burden-sharing method based on historical CO2 emissions to determine the domestic shares of the five MONET nations, resulting in cumulative CDR targets of 7â€“101 Gt CO2Â­ Â­(254 Gt CO2 together).

Cost-optimal cumulative CDR, at the global level (A) and at the national level (B), to deliver the Paris Agreement by 2100, for all scenarios are shown in Fig. 1.

Our results suggest that the Paris Agreement can be successfully and most cost-efficiently delivered in the total international cooperation, with BECCS predominantly (79%), deployed in regions with low-carbon electricity mix, with low-cost biomass supply (local or imported from low-cost producing countries such as Brazil or India) and low-cost CCS infrastructures, and AR (21%), deployed as early as possible to anticipate for its inherent CDR saturation. International cooperation allows for most capable and cheapest nations, such as China and Brazil, to provide CDR surplus on behalf of least capable ones, such as India, or more expensive ones, such as the European Union and the United States, at an overall CDR cost of $85/tCO2 by 2100.

Delivering domestically the Paris Agreement, based on national responsibility for climate change, leads to a more challenging â€” less accessible bioenergy resources, less available low-cost energy or geological CO2 storage â€” and more expensive portfolio of CDR solutions, increasing the overall CDR cost by 2100 by 39â€“68%. In the partial international cooperation scenario, this is due to the exhaustion of local biomass for BECCS in the European Union or the United States, and the resultingly import of biomass from Brazil or India, whereas in the no international cooperation scenario, this is because of the deployment of DACCS as a backstop CDR solution. Crucially, nations lacking from identified well-distributed and high geological CO2 sinks, such as India, are found to fail at delivering their share of the CDR burden.

Our results also show that the creation of an international negative emissions market, similar to already existing carbon emissions markets, such as the EU Emissions Trading Scheme, could provide an incentive for delivering the Paris Agreement in the most cost-efficient manner, whilst allowing for a fair distribution of the CDR burden, as it would allow for Negative Emissions Credits (NECs) trading.

Lastly, we find that synergies between CDR solutions, in the form of forest residues from AR used as feedstock for BECCSâ€™ bioenergy in this study, has a limited , yet not negligible potential, up to 3â€“4% of the CDR achieved by 2100, and could alleviate its economic burden by displacing more expensive and more carbon-intensive CDR solutions â€” BECCS using energy-dedicated biomass rather than agricultural residues, DACCS. However, this particular type of synergy relies on the prior deployment of AR, itself inherently limited, and poses an economic trade-off between the benefices of forest residues used for BECCS and the increased forest management costs for AR.

Overall, we emphasize the need for international cooperation to deliver the Paris Agreement at least-cost in a sustainable and fair manner. We highlight the importance of synergies, yet recognise their limited, or at least highly local potential. Research should urgently focus on more diversified portfolio of CDR options, and on the potential of synergies that could result from them, to know whether, where, and when, these CDR options will play a significant role in the near future or not.

2 Intergovernmental Panel on Climate Change, Global Warming of 1.5Â°C. An IPCC Special Report on the impacts of global warming of 1.5Â°C above pre-industrial levels and related global greenhouse gas emission pathways, in the context of strengthening the global response to the threat of climate change, World Meteorological Organization, Geneva, Switzerland, 2018.

Preview Presentation:
Presenter(s):
Solene Chiquier
Niall Mac Dowell
Mathilde Fajardy
Once the content has been viewed and you have attested to it, you will be able to download and print a certificate for PDH credits. If you have already viewed this content, please click here to login.

Enhanced Yield of Bio-Gas Production With Modified Themo-Reactor Configuration and Separation of CO2
Pakistan is currently facing severe energy crisis with significant shortfall. A number of short-term technical solutions are available but are not adequate to...
Green Design, Green Energy, and Sustainability
This webinar presents a systems analysis perspective that extends the traditional design framework to green design, green energy and industrial ecology leading...