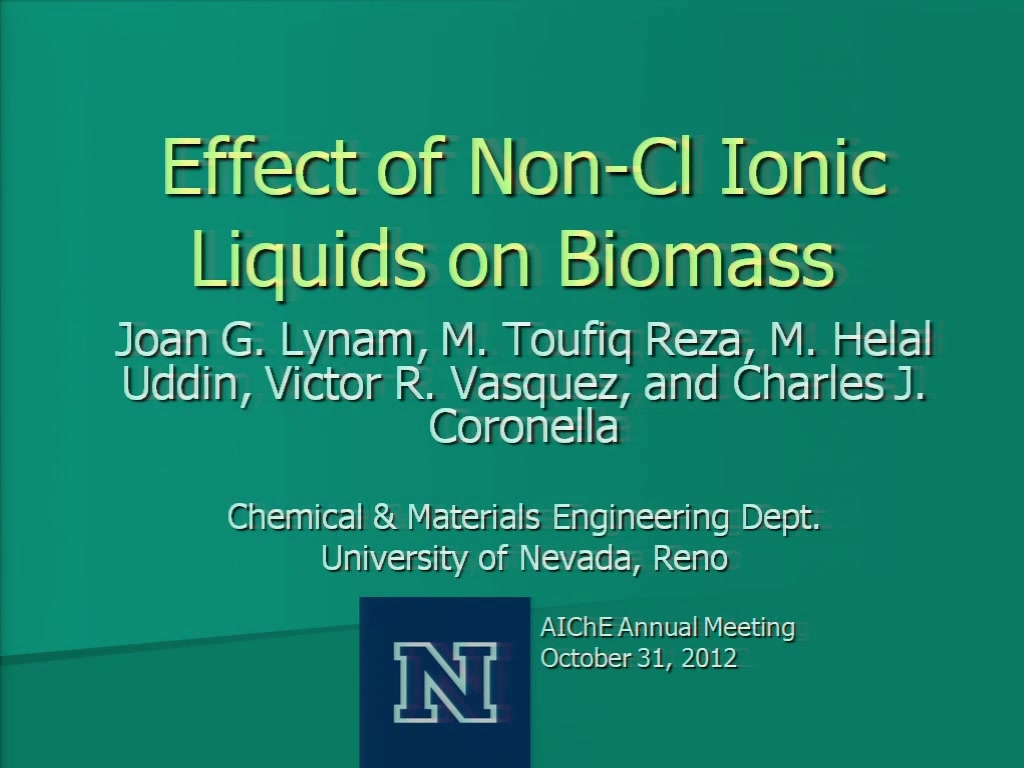 Rice is the fundamental food for about half the world's population and provides over 20% of calories consumed by humans.  Since the rice hull or husk is 20% of the grain, vast quantities of rice hulls are produced worldwide, which are then disposed by either burning, generating pollution and CO2, or by disposal in landfills.  As a secondary agricultural residue, rice hulls are already transported to processing centers, and are an underutilized renewable resource for conversion to fuel. However, their outside silica coating makes use of the cellulose inside challenging.

Ionic liquids are molten salts with melting points below 100 ºC. Ionic liquids have been found which can dissolve lignocellulosic biomass, but the more effective biomass-dissolving ionic liquids tend to contain Clˉ ions.  Clˉ ions can interfere with downstream processing, such as enzymatic hydrolysis.

In this study, the non- Clˉ containing ionic liquids 1-ethyl-3- methylimidazolium acetate  (EMIM Ac), 1-ethyl-3- methylimidazolium formate  (EMIM Formate), and 1-ethyl-3- methylimidazolium Lactate  (EMIM Lactate) were investigated.  A 10% (w/w) loading of rice hulls and a temperature of 110 ºC were used, while the effects of mesh size, stirring, and ionic liquid type were investigated.  Non- Clˉ containing ionic liquids remove lignin from rice hulls, which would be expected to make cellulose more available for further processing. Reducing mesh size of the rice hulls from between 1.651 and 1.168  mm to 1.168 to 0.589 mm in diameter  greatly increased the amount of lignin which could be precipitated from the ionic liquid using ethanol. Faster stirring enhanced removal of lignocellulosic components, indicating that external diffusion may be a significant barrier to fractionation.  EMIM Formate was found to remove significant quantities of lignocellulosic components as precipitates with water and ethanol addition.

If  non- Clˉ containing ionic liquids can be used to remove lignin from rice hulls, the remaining hulls should be available for enzymatic hydrolysis and fermentation to biofuels.  This renewable, nonfood, and accessible agricultural residue could be converted to fuel while reducing its alternative damaging environmental impact.

Preview Presentation:
Presenter(s):
Joan G. Lynam
Once the content has been viewed and you have attested to it, you will be able to download and print a certificate for PDH credits. If you have already viewed this content, please click here to login.

Conversion of Lignin to Hydrocarbon Fuels Via Catalytic Depolymerization and Hydrogenation
Three different solvent systems (sodium hydroxide solution, ethanol aqueous solution and aqueous solution of phosphoric acid) were chosen to study the...
One-Stage Process for Water Gas Shift in a Pd-Based Membrane Reactor
The water gas shift (WGS) reaction is the upgrading stage in the cycles of hydrogen production by, for example, steam reforming of light hydrocarbons from...