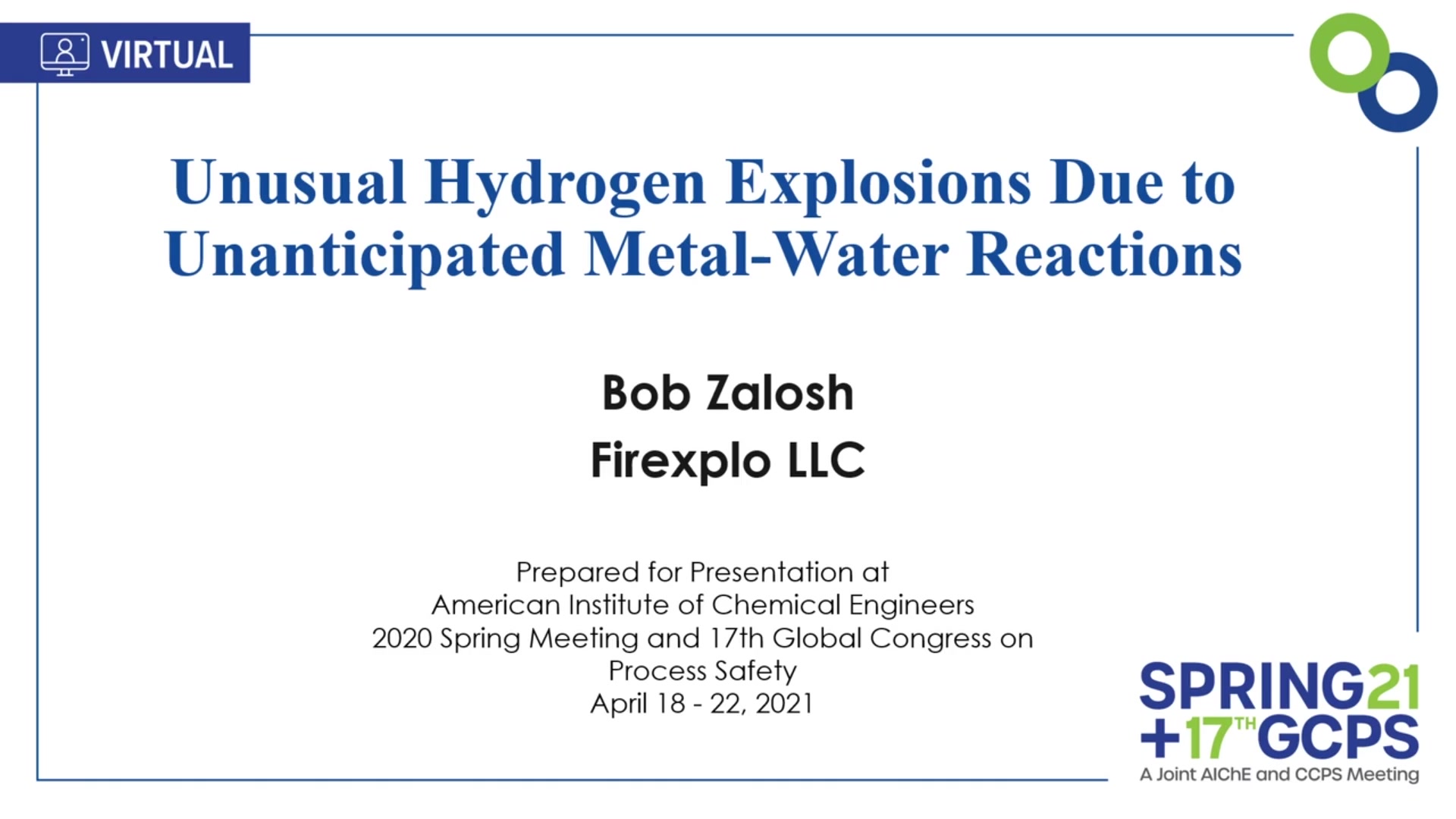 Inadvertent generation of hydrogen from ambient temperature metal-water oxidation reactions have been responsible for a surprising number of hydrogen explosions. This presentation describes three sets of incidents involving different metals in unusual circumstances that are normally considered free of explosion hazards. The incident investigations included tests by reputable laboratories to elucidate the nature of the oxidation reactions and how they proceeded without being detected. Reports of those investigations form the bases of the hydrogen generation explanations.

The first set of incidents are explosions due to inadvertent hydrogen generation from reactions of water with unprocessed incinerator bottom ash. A prime example is the December 2017 incident on a dry cargo ship carrying 2,333 metric tons of unprocessed incinerator bottom ash. The ash contained 2.6 % nonferrous metals including aluminum. The source of the water in the cargo hold was heavy rain during cargo loading. Laboratory tests with some cargo samples showed low rates of hydrogen generation per unit mass, but these generation rates in the unvented cargo hold were sufficient to develop a flammable atmosphere in the hold and in an adjacent ship store. The first explosion in the ship store was likely ignited by a spark in an actuated circuit braker. The second explosion, in the cargo hold, was more energetic and dislodged all the heavy steel secured hatch covers. There was one injury requiring hospitalization. An investigation uncovered reports of several land other explosion incidents involving water reactions with incinerator bottom ash.

The second type of metal-water reaction involves corroded copper cable in a moist atmosphere. One such incident occurred on a Rhode Island beach in which the beach sand covered an abandoned cable partially immersed in sea water. Samples of the sand revealed unusually high hydrogen concentrations. When the hydrogen-air mixture that formed above the hidden cable was somehow ignited, the resulting explosion caused a nearby woman to suffer broken ribs and other bruises. Subsequent to this incident, there have been accounts of other abandoned electrical cable under coastal beaches.

The third set of incidents entails zinc-water reactions in galvanized steel sprinkler system piping. A recent example is the explosion that occurred in a small sprinkler room during maintenance that entailed draining the pipe. The worker in the room suffered burn injuries and the building had to be evacuated. Subsequent investigation confirmed the zinc-water reaction mechanism and revealed that several other incidents have occurred in Scandanavian sprinkler systems that often have galvanized piping. Over time, the zinc layer in this piping will deteriorate due to zinc hydroxide formation and hydrogen accumulation. In some incidents the hydrogen accumulation levels caused sufficiently high pressures to result in pipe bursts.

The author hopes that the detailed accounts of these incidents and their investigations will allow the AIChE community to be more aware of inadvertent hydrogen generation scenarios in seemingly innocuous circumstances.

Note to Session Chairs: This abstract has also been submitted to the Topic 12 Session on Hydrogen Safety. I will be happy to present the paper at whechever session you think is most appropriate.

Preview Presentation:
Presenter(s):
Bob Zalosh
Once the content has been viewed and you have attested to it, you will be able to download and print a certificate for PDH credits. If you have already viewed this content, please click here to login.

Process and Storage Vessels Exposed to Fires: Failure Assessment
If your process and storage vessels were exposed to fire, what is the likelihood they would fail? Learn failure assessment best practices in this webinar...
Vinyl-Siloxane Cleavage: Applying Thermo-Analytical and Hybrid Calorimetry Techniques to Inform Process Safety and Design
The use of homogeneous and heterogeneous acid catalysts is widespread in the processing of siloxanes as they protonate Si-O bonds, enabling a vast array of...