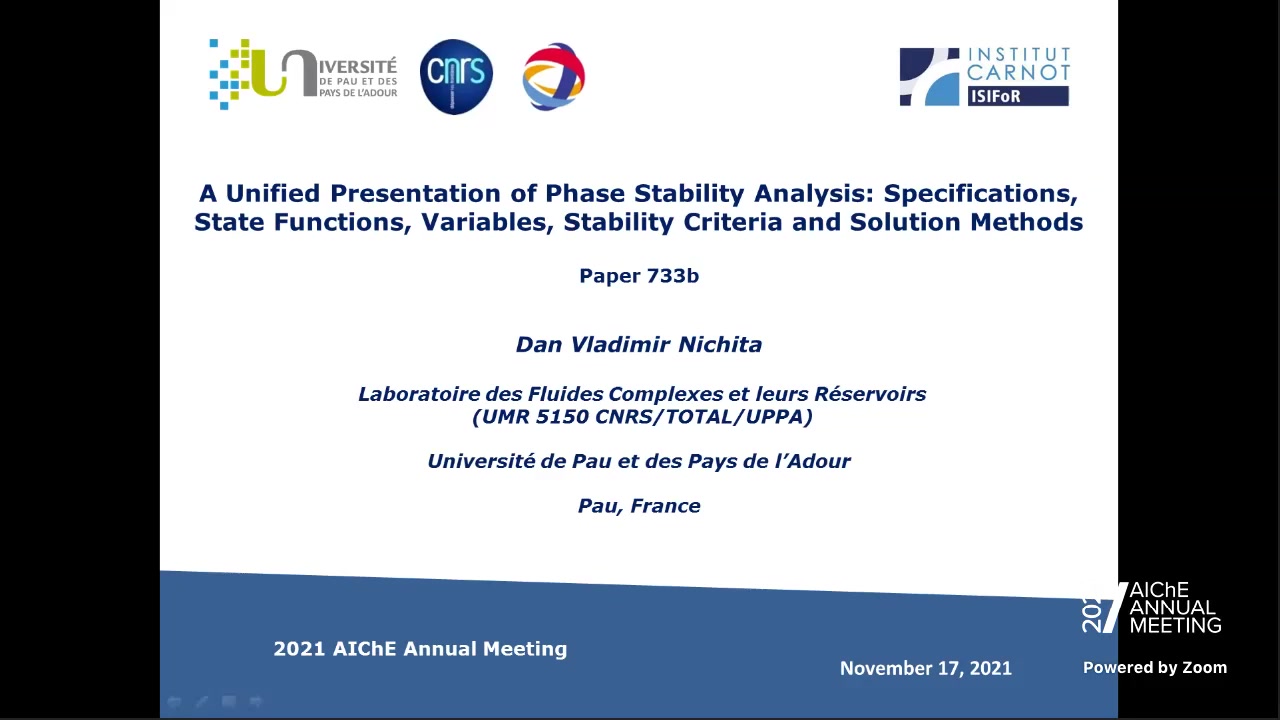 Phase stability testing is a key type of thermodynamic calculation. Phase stability assesses the state of a mixture at given conditions, it is crucial in multiphase flash initialization (for specifications other than pressure and temperature, stability testing is imperatively required even in the two-phase case) and is it is used to check the validity of a given phase split. Many applications, some of them important in the energy transition and environmental context (such as carbon dioxide capture and geothermal energy) require phase equilibrium calculations at specifications other than pressure and temperature (PT). Beyond the most widely encountered (and well documented in the literature) isotherm-isobar (PT) case, the other major specifications for phase equilibrium are: volume, temperature and moles (VTN), pressure, enthalpy and moles (PHN), pressure, entropy and moles (PSN), internal energy, volume and moles (UVN) and entropy, volume and moles (SVN). It must be noted that the literature was extremely poor before the last decade, when a continuously increasing interest in such calculations emerged. It appears that derivations of stability criteria and detailed analysis for PHN, PSN and SVN stability testing were not yet presented in the literature and are presented here for the first time. Moreover, up to date, to the best of our knowledge, a unified presentation of phase stability testing covering all major specifications and giving a general stability criterion is not available in the literature. The aim of this paper is to provide for the first time such a unified framework.

Four possible formulations of tangent plane distance (TPD) functions are presented and analyzed in detail for various specifications: i) formulation in mole fractions and one/two intensive (molar extensive) variable(s); ii) formulation in mole numbers and one/two extensive variable(s), leading to modified TPD functions; iii) the volume-based formulation (when pressure is a specification) and iv) formulation in component molar densities and an extensive variable density. It is shown that all cases naturally reduce to either PT stability (when pressure is a specification, such in PHN and PSN stability) or VTN stability (when volume is a specification, such in UVN and SVN stability), by solving a specific nonlinear equation with respect to temperature. Furthermore, the PT stability can be solved using a volume-based approach, in which volume is a primary variable (thus the equation of state is not solved for volume) and the pressure equation as an additional stationarity condition. The VTN stability can be also used for negative pressures and pure components, unlike the PT stability.

A general stability criterion is derived using three different methods. The general TPD function degenerates to the specific TPD function corresponding to any desired specifications. A general spinodal criterion is derived from the Hessian of the general TPD function and a procedure relating spinodal conditions at various specifications to those in PT and VT (or molar density-temperature) planes is given. A special attention must be paid to the mechanical instability domain (located inside the mechanical spinodal). A detailed description of safe procedures for handling specifications leading to mechanical instability is given. The singularities for the phase stability problem are the spinodal (trivial saddle point) and the stability test limit locus (STLL), which is a nontrivial saddle point. The vicinity of the latter stationary point poses the most severe convergence problems in phase stability and requires a special attention

The calculation protocol consists in modified Newton iterations with diagonal corrections (via a modified Cholesky factorization) to restore positive definiteness of the Hessian matrix in negative curvature regions and a two-stage line search procedure (to keep iteration points within the feasible domain and to guarantee the decrease of the objective function). Alternatively, a robust combined SSI/Newton method can be used, with damped SSI in early iteration stages and sculptured switching criteria (intended to avoid chaotic convergence behavior due to potential instability of successive substitutions and to prevent unnecessary slow first-order iterations before the switch). For the latter approach, a detailed description is given in a companion paper (Robustness and efficiency of phase stability testing at VTN and UVN conditions, Nichita, 2021 AIChE Annual Meeting, Poster Session: Thermodynamics and Transport Properties). Finally, the practical result is a single code able to handle all specifications, with multiple options to select between the desired PT (conventional or volume based) and VTN treatments.

Numerical experiments are carried out for several mixtures of various degrees of complexity, by spanning the planes defined by all pairs of major specifications at fixed overall number of moles and using refined grids (resulting in a large number of test points). Solution methods for phase stability testing proved to be highly robust and efficient, with no failure and, unlike previous methods, with no dramatic locally increase in the number of iterations at problematic conditions; no outliers were found, even at the most challenging conditions (e.g. outside the STLL in any specific plane). Phase envelopes are constructed in PT, VT, PH, PS, UV, SV planes, together with several key curves (STLL, spinodal, mechanical spinodal, zero-pressure curve). Heat maps highlight the domains with a relative increase in iteration numbers.

This paper presents the first unified treatment of phase stability testing including all major specifications; beyond its theoretical importance, an important practical consequence is a unified calculation framework for phase stability testing, allowing a versatile numerical treatment and using highly robust and efficient procedures whatever the specifications. A single code handling all major specifications is valuable for compositional simulators addressing a variety of thermodynamic processes.

Preview Presentation:
Presenter(s):
Dan Vladimir Nichita
Once the content has been viewed and you have attested to it, you will be able to download and print a certificate for PDH credits. If you have already viewed this content, please click here to login.

Keynote: Virtual-Engineering Software Framework for Integrated Biomass Conversion Modeling
This presentation covers the design and implementation of a software tool to systematically connect computational models of unit operations to simulate an...
On the Use of the Absolute, Excess and Net Amounts Adsorbed in Dynamic Mass Balances
The definition of the amount adsorbed dates back over a century with the vision of W. J. Gibbs and his dividing surface (i.e., partition or interface) between...