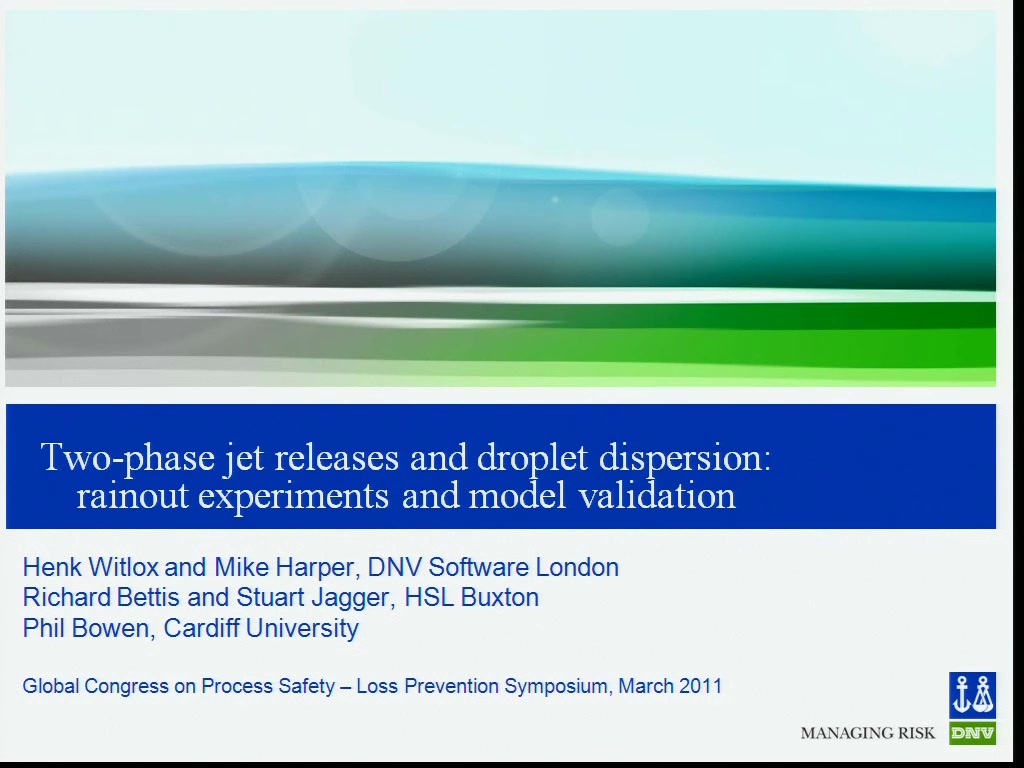 Many accidents involve two-phase releases of hazardous chemicals into the atmosphere. Rainout results in reduced concentrations in the remaining cloud, but can also lead to extended cloud duration because of re-evaporation of the rained-out liquid. For accurate hazard assessment one must accurately predict both the amount of rainout and re-evaporation of the pool.

This paper describes the results of the fourth phase of a Joint Industry Project (JIP) on liquid jets and two-phase droplet dispersion (funded by DNV, Exxon Mobil, HSE, RIVM, Statoil and TOTAL). The aim of the project is to increase the understanding of the behaviour of sub-cooled non-flashing and superheated flashing liquid jets, and to improve the prediction of initial droplet size, droplet dispersion and rainout. The preceding phases II and III of the JIP included experimental work limited to measurements of the flow rate and the initial droplet size distribution. These phases also included development and implementation (into hazard assessment package PHAST) of new correlations for initial droplet size distribution and Sauter Mean Diameter (SMD). In also included the development of a new methodology to predict the distributed rainout along the downwind direction (rather than rainout at one single downwind distance). This methodology was implemented into the PHAST dispersion model UDM.

The objective of Phase IV of the JIP was to generate experimental rainout data for non-flashing water and xylene experiments, and to develop recommendations for the best methodology to predict (distributed) rainout.

A range of orifice sizes and stagnation pressures were applied. Measurements included flow rate, initial droplet size, plume concentrations/temperatures for a range of downstream locations, and distributed rainout. A photographic technique instead of the PDA method was applied to include measurement of the larger (non-spherical) droplets. This enabled a more accurate evaluation of the initial droplet size distribution. In addition, still photographs and video records were made of the jets.

Model validation was carried out for the above experiments using two different correlations for the initial droplet size, i.e. the CCPS SMD correlation and the Phase III JIP SMD correlation. The validation includes flow rates, droplet size, distributed rainout, cloud temperature drop and cloud concentrations. Subsequently validation was considered for a wider range of experiments from the literature (sub-cooled and superheated releases) for both SMD and total rainout. Adopted rainout methods comprised both UDM methods including explicit modelling of the droplets, as well as more simple methods based on rainout correlations without droplet modelling. The additional experiments include the CCPS rainout experiments and 2-phase elevated releases (EEC propane, Desert Tortoise and FLADIS ammonia, Goldfish HF).

Preview Presentation:
Presenter(s):
Henk W. M. Witlox
Once the content has been viewed and you have attested to it, you will be able to download and print a certificate for PDH credits. If you have already viewed this content, please click here to login.

Syngas Utilization through High Pressure Solvent Assisted Fischer-Tropsch Synthesis
Currently, the high oil price combined with a low gas price presents a good opportunity for the development of new gas-related markets. This opportunity is...
Study On Performance of the Novel Steam Generation System Using Water-Zeolite Pair
The efforts for energy conservation are requested because of the limitation of fossil fuel and the environmental issue of global warming. The petrochemical and...