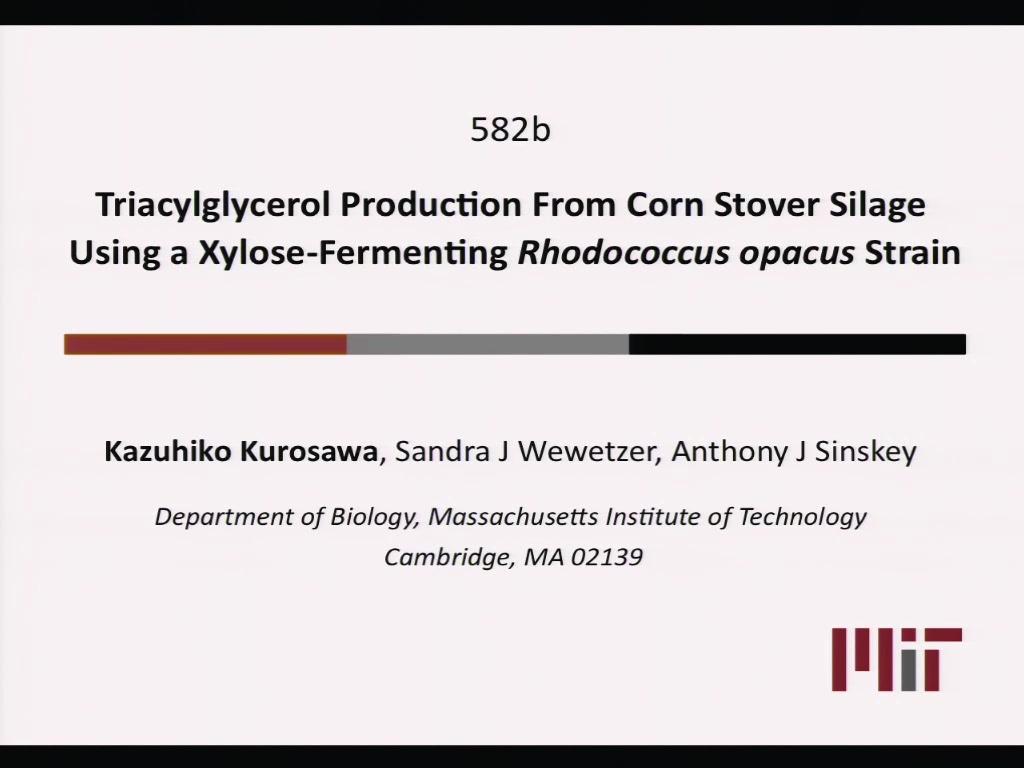 Background: Biodiesel, monoalkyl esters of long-chain fatty acids attached to short-chain alcohols derived from triacylglycerols (TAGs), can be produced from renewable biomass sources. There has been interest in producing TAGs from oleaginous microorganisms. As published recently (J Biotechnol. 2010; 147: 212-8), R. opacus PD630 is capable of accumulating a large amount of TAGs if grown on glucose medium. We have succeeded in constructing a variant of PD630 (MITXM-61, unplublished), which is capable of efficiently fermenting high concentrations of xylose and accumulating TAGs. In this study, the fermentative production of TAGs by MITXM-61 was investigated on a cellulosic sugar solution, saccharified from corn stover silage.

Results: We have developed a bioprocess for the preparation of a cellulosic sugar solution from corn stover silage without growth inhibitors for MITXM-61 cultivation. The wet silage material was suspended in 1% NaOH and incubated at 90°C. After filtering, the residue was washed with water, dried and ground. The pretreated material was suspended in water, adjusted to pH 5.0 and different commercial multi-enzyme complexes were added to the suspension. The reaction mixture was incubated at 45°C with shaking. After 24 h, the prepared saccharified solution contained more than 100g/L of total sugars (composed of 66% glucose, 29% xylose and 5% other sugars). R. opacus MITXM-61 was grown in a bioreactor batch-culture using the saccharified solution as growth medium. Glucose and xylose were consumed simultaneously and 16 g/L of total fatty acids was accumulated, corresponding to 58% of the cell dry weight.

Conclusion: R. opacus MITXM-61 has the rare capability of accumulating large amounts of TAGs when grown on saccharified corn stover silage solution with a high sugar concentration. This strain holds a great potential as a future source of industrial biodiesel derived from cellulosic feedstocks.

Preview Presentation:
Presenter(s):
Kazuhiko Kurosawa
Once the content has been viewed and you have attested to it, you will be able to download and print a certificate for PDH credits. If you have already viewed this content, please click here to login.