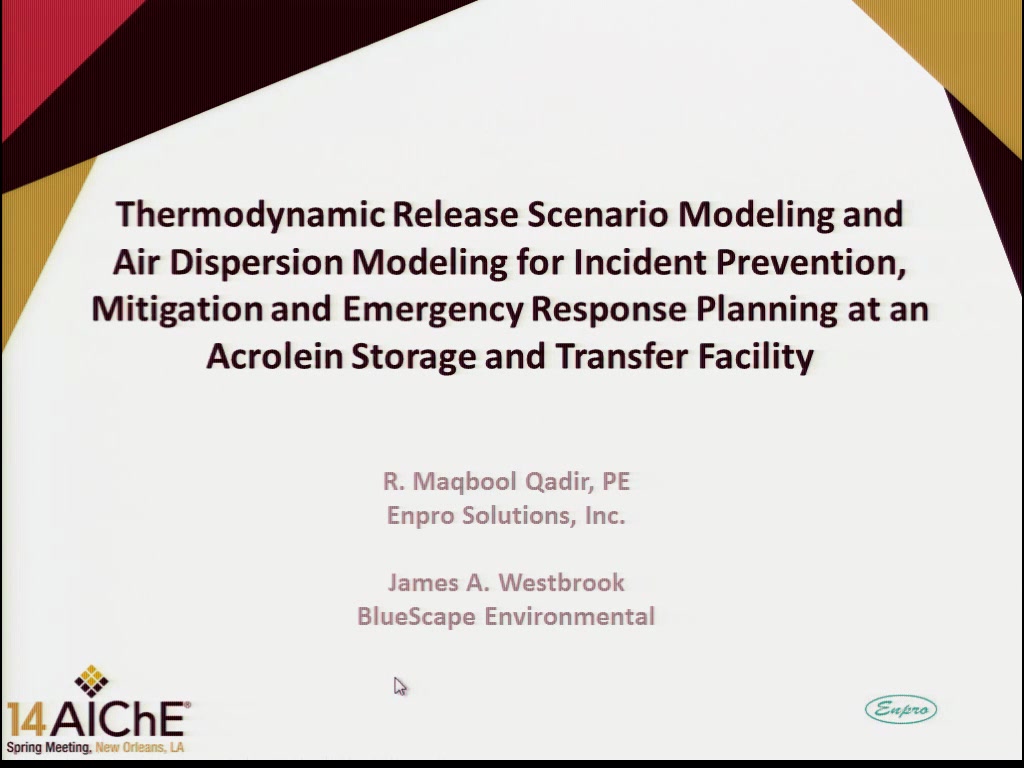 Acrolein (Acr) is a highly toxic, flammable and reactive chemical widely used in agriculture and oil field chemical formulations. This case study presents the results of thermodynamic modeling and offsite consequence analysis (OCA) including worst case scenario (WCS) and alternate release scenario (ARS), conducted for an Acrolein storage facility in New Iberia, Louisiana. Hazard analysis including hazard review and identification, and OCA is required by federal, state and local regulations for facilities storing greater than threshold amounts of regulated toxic or flammable substances.  Applicable federal regulations include the Risk Management Program (RMP) under the Clean Air Act and the United States Occupational and Health Safety Administration’s (OSHA) Process Safety Management (PSM) Standard. The hazard analysis is useful for facility siting, accident prevention and emergency response planning even when stored quantities of hazardous materials are below regulatory thresholds for a particular facility. In this case study, the results of the modeling were used for two separate but related purposes:

The site was owned and operated by a chemical distributor to the oil & gas industry and was used for storage of full and partially empty Acr containers ranging in size from rail car containers to smaller day tanks. The Acr containers included a nitrogen blanket in each tank to prevent oxidation of the contents. The Acr containers were protected by a rupture disc and pressure relief valve combination.

Then in the second step, thermodynamic modeling was conducted to estimate how an Acr release could occur, how much would be expected to be released, and at what rates and under what conditions?  For the external fire scenario, an external pool fire model developed and used by the DOT in a tank car study is used as the heat input model.  Methods for estimating bulk heating rates and time to reach bulk temperature are consistent with the DOT and API 520 guidance. For the fire and rapid polymerization models, calculated results included the following:

Rapid polymerization was thought to be a relatively unlikely occurrence but was selected as the “design” case for facility planning as calculations showed that it is a conservative but plausible scenario.

In the final part of the analysis OCA was conducted for the WCS and the selected ARS “design scenario”.  Air dispersion modeling was performed to estimate the impact of potential releases on surrounding properties and onsite and offsite receptors in the vicinity of the release: The WCS was analyzed using RMP Comp and the ARS was evaluated using ALOHA. The OCA was conducted based on the following conditions.

The OCA mapped the spread of a plume from potential releases on aerial maps of the facility and surroundings, and identified receptors potentially affected by the release.

Preview Presentation:
Presenter(s):
Riffat Qadir
James Westbrook
Once the content has been viewed and you have attested to it, you will be able to download and print a certificate for PDH credits. If you have already viewed this content, please click here to login.