Heat from solar radiation is currently collected in concentrated solar power (CSP) plants where it is converted to electricity via a power cycle. The intermittent nature of solar energy necessitates the development of efficient storage systems for the on demand power supply. Commercially, the heat is converted to electricity using molten salts as the working and storage medium, which suffer from several drawbacks such as temperature limits, low efficiency and short time storage [1]. Calcium looping (CaL), which relies on the cyclic reaction of CaO with CO2, is potentially a means for storing solar energy in a chemical substance by driving the endothermic CaCO3 decomposition. The reverse carbonation reaction can then produce heat (Î”Î—Î¿=-178 kJ/mol) at high temperatures (~850 Â°C under pure CO2 atmosphere) increasing the power cycleâ€™s efficiency, while the regeneration of CaCO3 is feasible within the operational temperature range of CSP towers [2â€“4]. These features, along with the abundance of materials, high energy density and lack of toxicity render CaL a promising route for storing solar energy in the long term. CaCO3 decomposition reaction has been studied for many years, but consensus has not been achieved regarding the rate expression and the effect of CO2 partial pressure [5]. The existence of a robust kinetic model is of high importance for the reactor design. Additionally, the design of a calciner that efficiently converts solar to chemical energy through CaCO3 decomposition is probably the greatest challenge of this concept. Herein, a lab-scale experimental kinetic study of limestone decomposition was carried out targeting to the development of a reliable kinetic model that will explain the literature discrepancies. This kinetic model was then used for the design of a 1-D drop-down reactor that can be used for thermochemical storage of solar energy in CSP plants.

Kinetic experiments of limestone (Granicarb 0.1/0.8, OMYA S.A.) decomposition were conducted in a continuous flow fixed-bed reactor at temperatures between 825-885Â°C and CO2 partial pressures <0.6 atm. Parameters such as the particle size (45-75 Î¼m), the gas hourly space velocity (22500 h-1) and the bed weight and concentration (0.1 g of sample diluted in 1.5 g of quartz) were defined experimentally such as to minimize the effect of heat and mass transfer phenomena on the observed rate. For each pair of temperature and CO2 partial pressure conditions, an experimental conversion - time curve was derived.

Calcination is a reaction that takes place at the surface of the reactant CaCO3 which is reduced during reaction. Accordingly, the grain model was used that predicts the conversion evolution assuming that the particle is consisted of impervious spherical grains that are shrinking during the course of reaction (Figure 1A). The grain model equation was fitted in each of the experimental conversion-time curve deriving the specific reaction rate r (T, PCO2) (e.g the rate of reaction per unit of reactant surface area in m3/m2s or m/s) as the only fitting parameter. The expression of r which is a function only of reaction temperature and CO2­ partial pressure is discussed in the results section.

The type of the calciner modeled herein was a 1-D plug-flow drop-down narrow tube reactor. Limestone particles and the gas mixture (CO2/N2) enter from the top of the reactor and decomposition takes place as they move downwards. The reactor was discretized in the axial direction (1000 slices) assuming homogeneous PCO2 and temperature conditions inside each slice (Figure 1B). The residence time of the solids in each slice was calculated assuming Stokes flow around the particles (Re < 1) [6]. Additionally, the limestone particles were discretized in the radial direction (100 shells) to take into account the intraparticle CO2 partial pressure gradients (Figure 1A). Thus, PCO2was a function of radial position inside the particles and its expression was found by solving a differential equation assuming steady state conditions. The calculated solids residence time and the PCO2(r) were then introduced in the kinetic model for the estimation of the conversion change Î”X. The released CO2 and the heat absorbed due to the endothermicity of CaCO3 decomposition were taken into account in the mass and energy balances of the slice, providing the input information of the subsequent slice volume. The same calculations were carried out for the next volume slices. Both the kinetic and reactor modeling were performed using the Matlab software (Mathworks).

From the kinetic experiments, Figure 1D shows the experimental values (points) and the grain model fitting (line) of conversion versus time for decomposition of limestone at 885Â°C and under different CO2 partial pressures. The model fits adequately on the experimental data deriving one value of the only fitting parameter r (rate per surface area unit) for each X-t (the r values are presented in Figure 1E). Also, the reaction rate is decreased when increasing PCO2 as expected due to approach to equilibrium. The effect of PCO2 on the specific reaction rate is non-linear and can be described well by a two stage mechanism (Figure 1C). According to this mechanism, CO2 is firstly in an â€œadsorbed-likeâ€ stage before released in the gas phase in a second step. Structural changes in the solid phase may also happen simultaneously as proposed in the literature regarding the presence of a metastable CaO* phase as intermediate [7]. Assuming that the first step is controlling the rate (Ea=217 kJ/mol) and the second is at equilibrium, a Langmuir-type relation is derived which describes well the experimental values of the rate (lines in Figure 1E). Regarding the literature differences, it was concluded that they are mainly derived by heat and mass transfer effects, as well as, sintering phenomena that reduce the initial value of limestoneâ€™s surface area leading to underestimation of rate values.

As described in the methodology section, the reactor model consists of three different sub-models, namely the reaction kinetic model, the hydrodynamic model and the intraparticle diffusion model. There are not many experimental data in the literature that meet the conditions for verifying the validity of all the three sub-models simultaneously. Fernandez et al. [8] carried out experiments in a pilot scale drop down tube reactor for calcining fine limestone particles. They imposed high gas/solids flow ratio to maintain constant PCO2 and temperature conditions throughout the whole reactor. Their results were used for validating the reactor model with respect to the reaction kinetics but also the hydrodynamic sub-models, as the reaction time is related to the residence time of the solids inside the reactor. The intraparticle diffusion model could not be tested under such conditions as intraparticle PCO2 gradients are minimized for very small particles. Figure 1F shows that the model predictions are in good agreement with the experimental data with some deviations probably related to the model approximations but also to experimental errors. Experiments carried out in our fixed-bed apparatus using different particle sizes for defining the size that minimizes the intraparticle diffusion resistance for the kinetic experiments are shown in Figure 1G. These experiments were used to validate the intraparticle diffusion along with the reaction kinetic sub-models (lines in Figure 1G). The model predicts that particles with diameter larger than 100 Î¼m will exhibit slower reaction rates due to intraparticle CO2 pressure gradients, which is in line with the experimental results. Again, the minor discrepancies observed may have been produced by the model assumptions (such as the adopted tortuosity value etc.). Apart from simulations for validation purposes, the model predicted that calcination of limestone can be achieved in residence times of a few seconds under relevant conditions for thermochemical energy storage.

A kinetic study of limestone decomposition was carried out experimentally and theoretically. It was found to follow a two-stage mechanism implying a non-linear effect of the CO2 partial pressure on the reaction rate. The developed kinetic model was subsequently used for the design of a 1-D drop-down narrow tube calciner that can be used in thermochemical energy storage applications in CSP plants. The validity of the kinetic and reactor models was verified after deriving satisfactory predictions on experimental data. The existence of robust models is strongly believed to enhance the maturity level of the application of calcium looping for the efficient exploitation of solar energy.

This work has received funding from the European Unionâ€™s Horizon 2020 research and innovation program under grant agreement No 727348, project SOCRATCES. 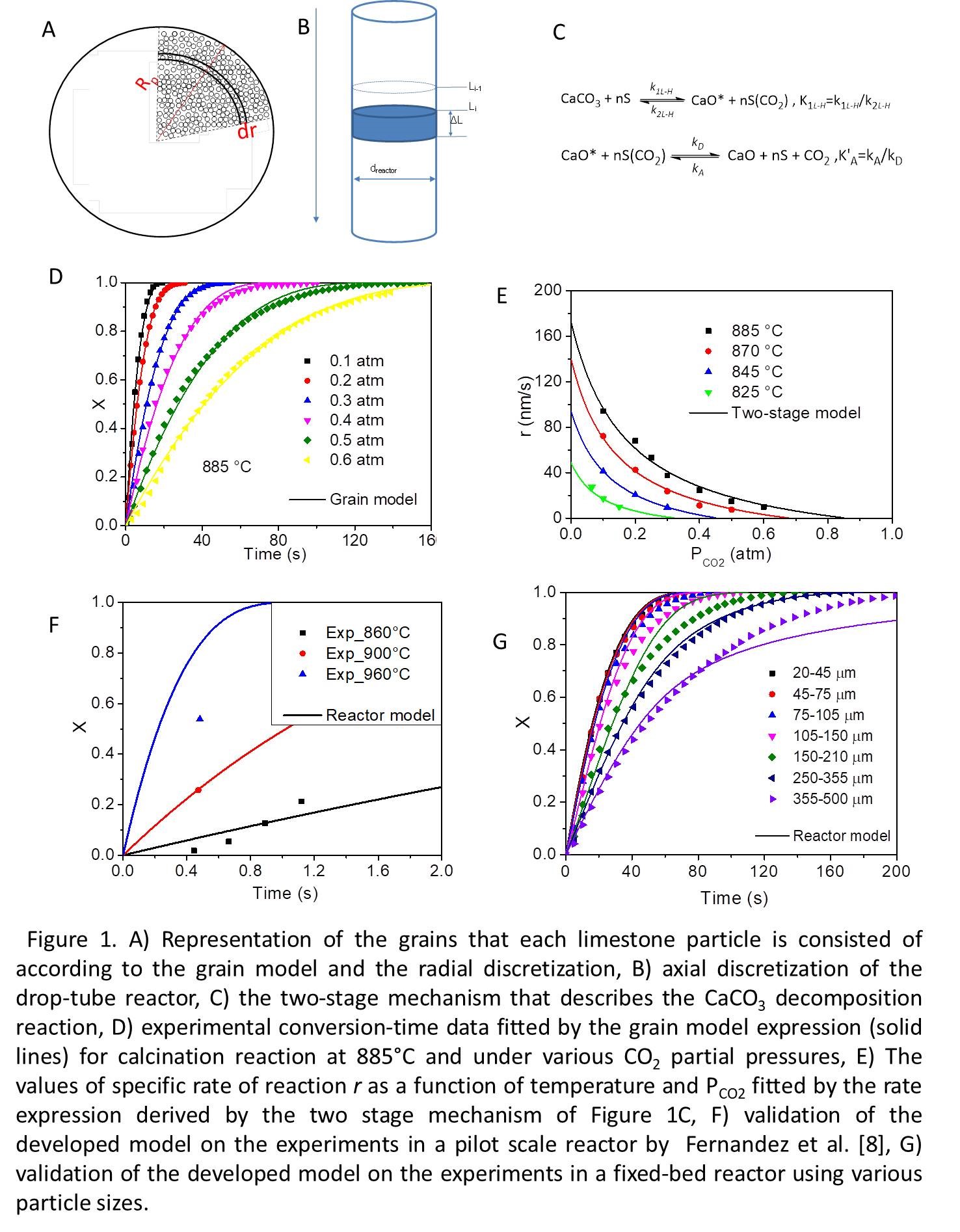 Preview Presentation:
Presenter(s):
Angeliki A. Lemonidou
Athanasios A. Scaltsoyiannes
Stylianos G. Spyroglou
Stergios G. Yiantsios
Once the content has been viewed and you have attested to it, you will be able to download and print a certificate for PDH credits. If you have already viewed this content, please click here to login.

Adsorption of CO2-Containing Gas Mixtures Over Amine-Bearing Pore-Expanded MCM-41 Silica: Application to CO2 Separation and Purification
Adsorption technology such as pressure swing or temperature swing adsorption is widely used for purification and separation of gases (Ruthven et al., 1994)...
Kinetic Modeling and Optimization of Polymerization Reactions
Specialty polymers often involve polycondensation mechanisms. Our goal is to identify the kinetics and to develop optimization strategies for achieving desired...