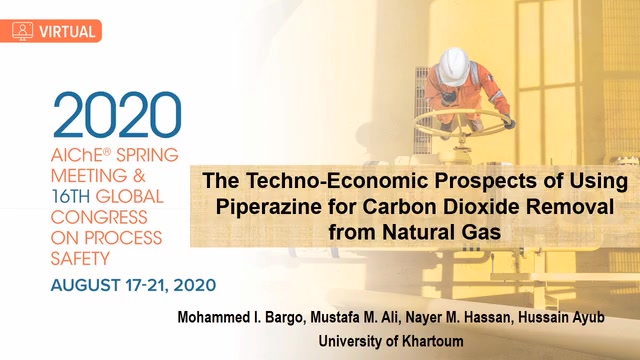 One technology used in the removal of carbon dioxide from natural gas is the absorption process, in which Alkanolamines are frequently used as solvents. Since the 1960â€™s and 70â€™s several Amines have come into general use, however, limited information has been reported in the literature concerning the Amine best suited to treat sweet natural gas. From the absorption rate point of view, primary or secondary amines (e.g. MEA) are preferred. However, in case the costs of regeneration are also taken into account, tertiary amines (e.g. DIPA) are much more attractive.

The core objective of this work is to evaluate the potential of using Piperazine against the most common Amines which are used nowadays. This article presents a novel investigations of the most significant effective parameters for processing Piperazine, and their influences on the plant efficiency and investment cost. And also has demonstrated that, choosing Piperazine (30%wt) could reduce more than 10% of the operating cost and 4% of the equipment cost in the Acid Gas Removal Unit against the other solvents.

Results show that Piperazine (30% wt.) is the most effective solvent, which performs Amine loading of 0.8 mol-CO2absorbed/mol-Amine at the specified operating conditions. Moreover it has preceded other alternatives in both operating and equipment cost points of view. Results also show that, the concentration of the Amines has significant effect on the operating cost of this unit: some of them exhibit increasingly, others decreasingly and others even have inflection point (concave up curve); this behavior is due to the fluctuation of the operating cost which concerns the reboiler duty cost and the makeup cost. For each solvent, there is a certain limit to which distillation column can recover the Amine concentration; because reboiler temperature cannot exceed the degradation temperature of the solvent; hence the makeup must carry the shortening of the distillation to achieve the targeted Amine-water solution concentration.

Application of Dynamic Simulation for Relief System Design in LNG Facility
Nonlinear Model Predictive Control Simulations of Gas-Solid Reactors for Chemical Looping Combustion of Methane
Chemical looping combustion (CLC) is an advanced combustion strategy for power generation in which a hydrocarbon fuel is converted to carbon dioxide and water...