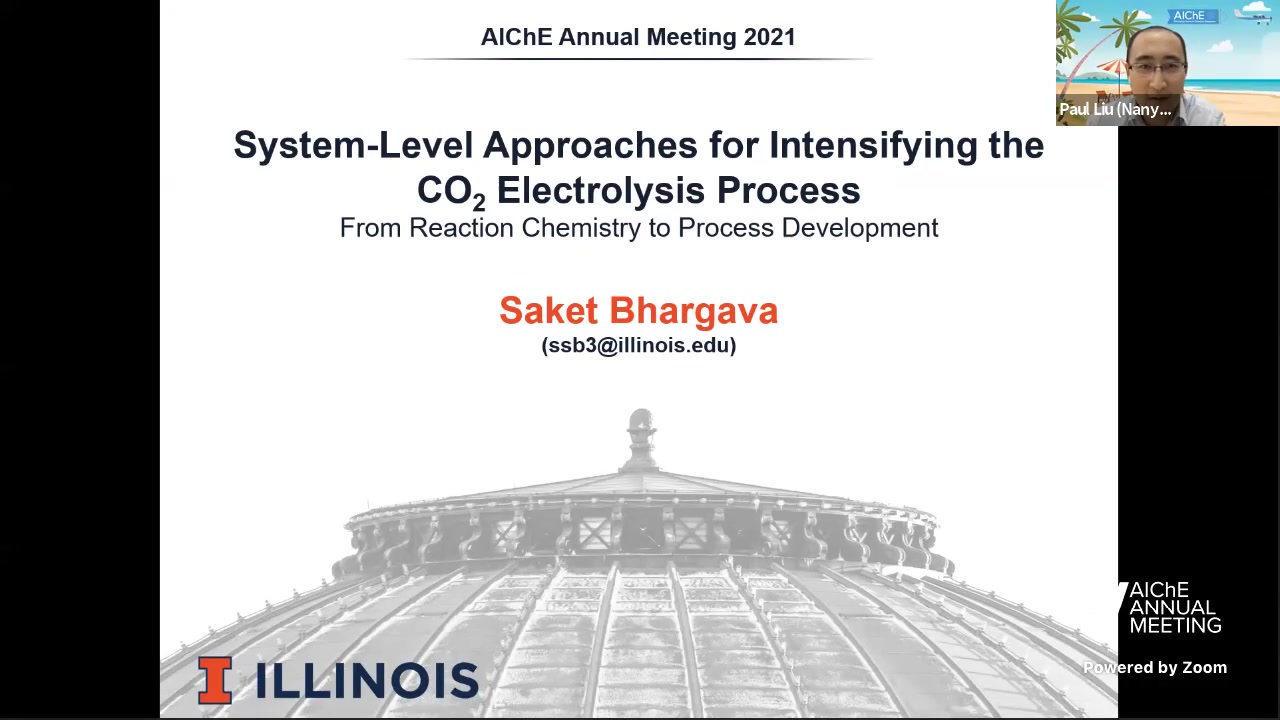 Electroreduction of CO2 (CO2RR) is a potentially carbon-neutral method to utilize a fraction of the excess CO2 emissions. CO2RR can convert CO2 into various carbon-based chemicals such as methanol, formic acid, ethylene, and carbon monoxide. Significant research efforts by academia and industry have resulted in various energy-efficient cell configurations and active/selective catalysts for CO2RR, however, significant electrochemical performance improvements are still needed for economic feasibility at scale.

This talk will cover multiple system-level approaches that can be further explored to intensify the electrochemical performance of a flow electrolyzer for CO2RR.

First, we focus on the role of electrolyte composition in the mechanism of CO2RR to CO on Ag nanoparticles (NPs). Insights obtained from polarization curves, Tafel slopes, Pourbaix diagrams, onset potentials, and electrochemical impedance spectroscopy will be used to explain the effects of electrolyte identity, concentration, and pH on the rate determining step.

Next, we cover the systematic process optimization of CO2RR to CO on Ag NPs resulting in state-of-the-art electrochemical performance: CO partial current density (jCO) exceeding 850 mA/cm2 with a CO Faradaic efficiency (FECO) of 98% at a cell potential (Vcell) of -3 V corresponding to a full cell energy efficiency for CO production (EECO) exceeding 40% for a conversion per pass of CO2 to CO exceeding 35%.

Preview Presentation:
Presenter(s):
Daniel Azmoodeh
Daniel Azmoodeh
Saket Sanjay Bhargava
Saket Sanjay Bhargava
Prithviraj Chumble
Prithviraj Chumble
Paul Kenis
Paul Kenis
Sujay Someshwar
Sujay Someshwar
Once the content has been viewed and you have attested to it, you will be able to download and print a certificate for PDH credits. If you have already viewed this content, please click here to login.

A Novel Photocatalytic Process for Electrification of Hydrogen Production By Steam Methane Reforming.
One of the major issues of our time is the dual challenge of meeting the increasing demand for low cost, safe, and reliable energy while simultaneously...
Application of Natural Zeolites As Support in Low-Temperature Fischer-Tropsch Synthesis
In the Fischer-Tropsch (FT) synthesis, CO and H2 (synthesis gas) are converted into plethora of hydrocarbons mainly paraffins and olefins and these can be...