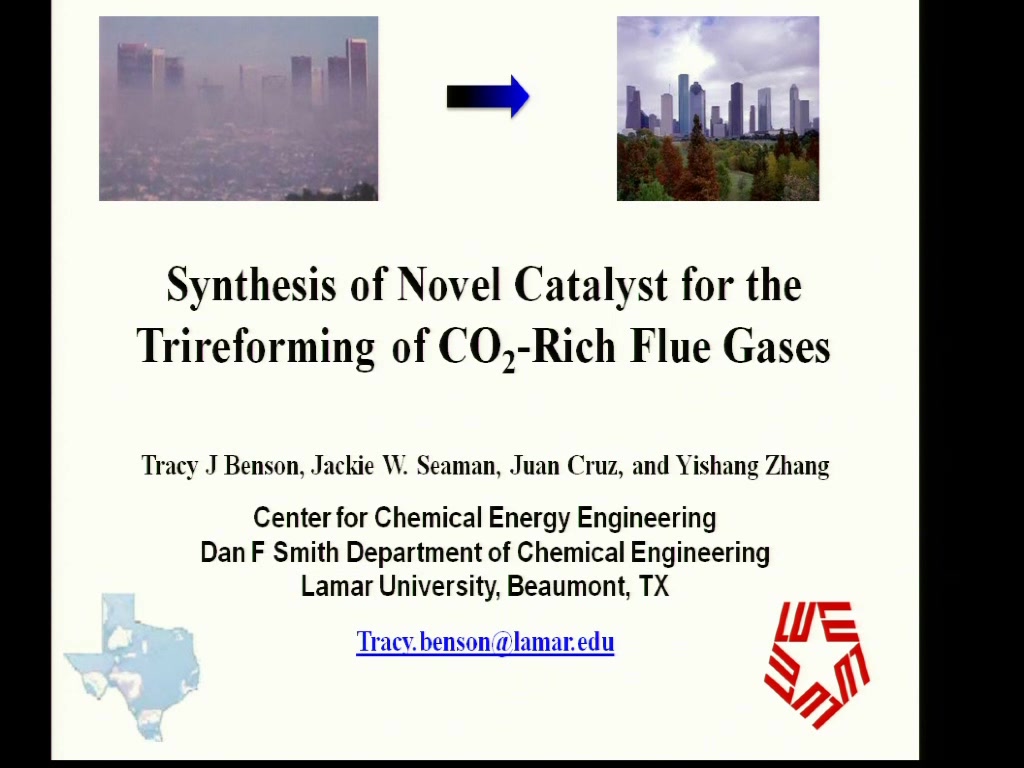 
Today’s chemical industry is very complex with most commodity chemicals being produced from some variation of petroleum feedstocks. From transportation fuels to polymers, petroleum is truly the largest source of basic hydrocarbons for which many of the common household products consumers use. Along with this, stems many industrial and environmental issues which must be addressed for long-term stability of the industry. The upgrading of petroleum feedstocks, which are bulky, hydrogen deficient molecules, generally requires vast amounts of hydrogen gas during petroleum upgrading. Hydrogen is typically produced via methane steam reforming reactions. Carbon dioxide, noted for its greenhouse gas potential, is produced as a byproduct of methane steam reforming. CO2 sequestration is a growing concern and is at the forefront of many political and environmental policies that are being introduced worldwide. One avenue to combat the growing release of CO2 into the atmosphere is to convert it to useful chemicals via trireforming.

Trireforming is the conversion of carbon dioxide, methane, and water to produce synthesis gas (syngas). The uniqueness of the trireforming technology is that bulk flue gases can be utilized without the separation of CO2 and steam. Only the SOx’s should be scrubbed before processing, greatly reducing separation costs. The problems associated with the conversion of CO2 are overcoming thermodynamic limitations, as carbon dioxide tends to be a very stable molecule. However, through careful catalyst design, a novel catalyst has been synthesized that operates autothermically, neither exothermic nor endothermic, to decrease trireforming processing costs. This dual functioning catalyst is composed of nickel nano-sized particles that promote CO2 conversion in a semi-oxidative environment. The catalyst, synthesized using a reverse micelle technique, is composed of an MgO – TiO support, which provides for adequate coverage of the active metal and catalyst robustness.

Characterizations of the catalyst have been performed using Scanning Electron Microscopy, X-ray Fluorescence, X-ray Diffraction, and Temperature Programmed Reaction (and Desorption). Initial testing of the trireforming catalyst has indicated that conversions of 90 and 100% of CO2 and methane, respectively, are possible at reaction temperatures of 750°C. These findings and a postulated reaction site mechanism will be presented.

Preview Presentation:
Presenter(s):
Tracy J. Benson
Once the content has been viewed and you have attested to it, you will be able to download and print a certificate for PDH credits. If you have already viewed this content, please click here to login.

Material and Engineering Assessments of Electrochemical Processes for Carbon Capture Technology
Integrating carbon capture technology with large source carbon emitters is necessary in the very near future to mitigate the contribution of anthropogenic CO 2...
Modular Production of Synthetic Petroleum from Shale Gas
A current issue related to the production of petroleum from shale formations is the co-production of natural gas. In many cases, this co-produced gas is flared...