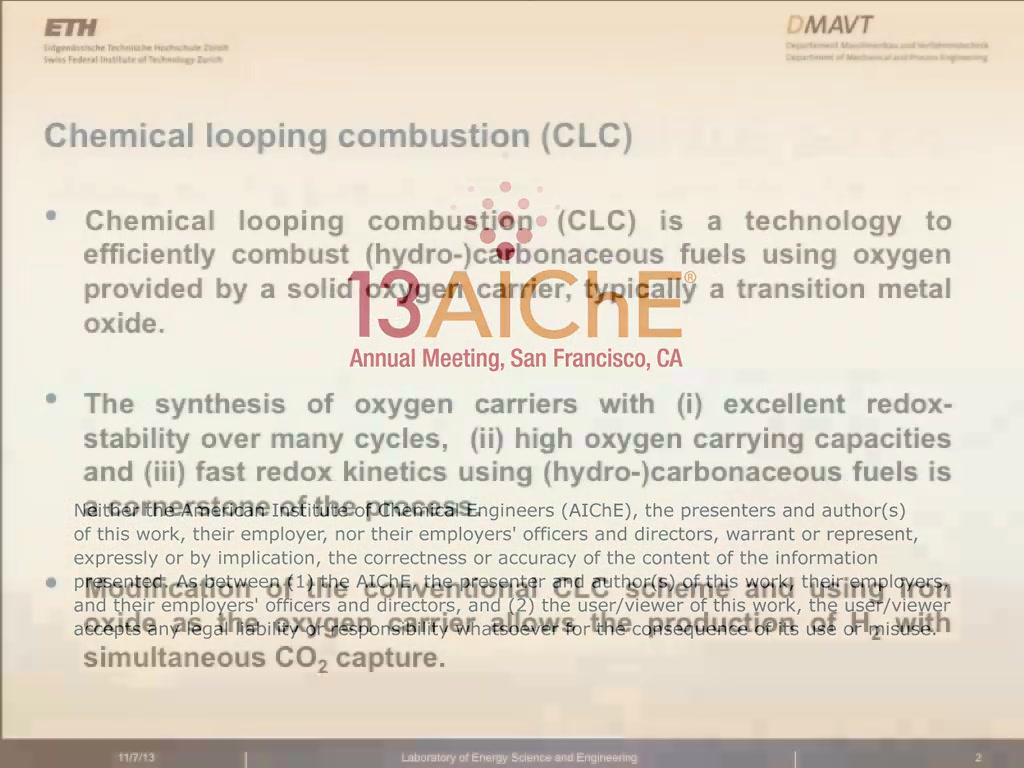 Hydrogen may become an important energy carrier in the future. The current technologies for the large scale production of H2, i.e. steam reforming of natural gas and steam gasification of coal, are very energy intensive owing to the need for various separation steps to obtain pure H2.1 However, for H2 to become a major energy carrier it has to be produced in an efficient and sustainable way. Chemical looping water-splitting (CLWS) is an emerging technology that can inherently produce a pure stream of H2, thus eliminating the need for energy intensive purification steps.2 In CLWS, lattice oxygen of an oxygen carrier, typically a transition metal oxide, is used to combust a hydro-carbonaceous fuel. In the subsequent step, the reduced oxygen carrier is re-oxidized with steam to produce a pure stream of H2. Iron oxide is an attractive material for the CLWS process owing to its wide availability, low cost, minimal environmental impact and high equilibrium partial pressure of H2.3 Nevertheless, its reactivity and cyclic redox stability are two major concerns with regards to the CLWS process. Pure Fe2O3 that is completely reduced to Fe deactivates after a few cycles, probably due to sintering.4 To circumvent this rapid deactivation it has been proposed to stabilize iron oxide with a high Tammann temperature support, such as Al2O3, ZrO2, TiO2, SiO2 or MgAl2O4. However, it was found that supported Fe2O3 has often a high tendency for carbon deposition. An approach to improve the reactivity of iron oxide with CH4 and higher hydrocarbons is the addition of more reactive transition metal oxides.5

Preview Presentation:
Presenter(s):
Qasim Imtiaz
Once the content has been viewed and you have attested to it, you will be able to download and print a certificate for PDH credits. If you have already viewed this content, please click here to login.

Essentials of Environmental Life Cycle Assessment
Improve the environmental profile of your company’s products and processes using Life Cycle Assessment (LCA). In today’s world, more and more companies...
Evaluation of Ascorbic Acid and Acetic Acid As Catalysts in the Transesterfication of Virgin Soybean Oil
Biologically derived acids such as ascorbic acid and acetic acid may be used to catalyze the production of biodiesel in a supercritical fluid solvent. The use...