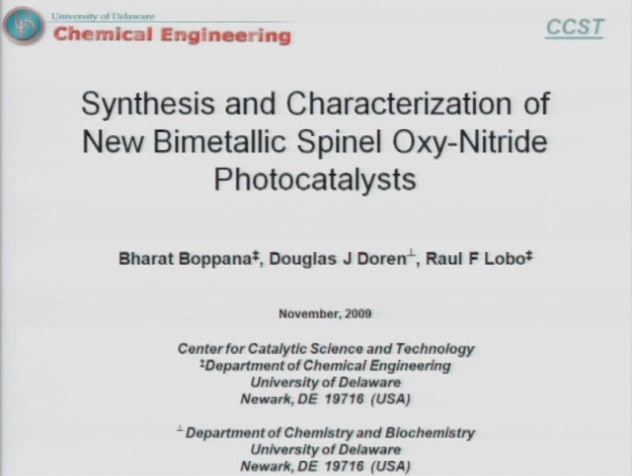 Photocatalysis is the acceleration of a slow reaction by a photon-assisted process with titanium dioxide (TiO2) being the material of choice for most environmental applications including hydrogen production by water splitting [1,3]. Inspite of a number of advantages like optimum band structure, high surface areas etc, it's efficacy is reduced from the inability to use light with energies less than 3 eV (visible light). The challenge thus lies in the design and development of effective photocatalysts with band gaps less than 3 eV and with efficiencies comparable to TiO2. In the last decade there has been a lot of progress in this direction, introduction of N orbitals increases the valence band level thereby reducing the band gap [2]. Wurzite zinc gallium oxy nitrides (ZGONs) are among the many N substituted compounds that have been investigated as a solution to TiO2 limitations. It has been reported that these ZGONs can produce 1000 µmol/hr of H2 from H2O upon co-loading with RuO2 [3]. The band gaps have been noted to be highly dependent of the Zn content [4]. The high temperature nitridation process gives very limited control over the final Zn content and this coupled with a significant surface area loss due to sintering (< 8 m2/g) makes them a less attractive alternative to TiO2 though they have the ability to be active in visible light (band gaps of 2.6 to 2.8 eV).

Our goal is to improve current or develop new synthesis that optimize the Zn/Ga ratio closer to 0.5 without subsequent surface area or Zn loss from the precursor. We are currently following a multi-pronged approach to tackle these two issues; Zn-O bond strength is dependent on the precursor employed and is lower for ZnO compared with ZnGa2O4 [5]. Employing this we were able to synthesize ZGONs with relatively low band gaps (2.35 eV) and adequate surface areas (36 m2/g). Interestingly the materials no longer tend to produce a wurzite (tetrahedral Ga) crystal structure as reported earlier3 but tend to be a spinel (octahedral Ga) though it has essentially the same Zn and Ga content according to SEM-EDAX. We are currently investigating the spinel ZGON structure using XRD, EXAFS, Ga71 NMR, XPS, and Raman spectroscopic techniques. Increasing surface areas can also be achieved by the preparation of photocatalysts with mesoporous silica (SBA 15). Zinc gallate phase was dispersed in SBA15 and finally nitrided to yield a total surface area of 515 m2/g. Thus, the above improvements shown in the properties (band gaps, surface areas) can lead to better photocatalysts for water splitting to produce hydrogen. These methods (among others) are being investigated to synthesize catalysts which can replace TiO2 with one that can be effectively be utilized the solar spectrum eliminating the need to use energy intensive UV light sources.

Preview Presentation:
Presenter(s):
Bharat Boppana
Once the content has been viewed and you have attested to it, you will be able to download and print a certificate for PDH credits. If you have already viewed this content, please click here to login.

Glid ARC Plasma Conversion of Pyrolysis Gas Into Syngas
Pyrolysis gas is a product of Biomass, Municipal Wastes or Coal gasification process that contains H2, CO as well as unreacted light hydrocarbons and heavy...
Metal-Organic Framework (MOF) Materials and Membranes for Molecular Separations
This talk will describe our recent progress in the synthesis and processing of MOF/ZIF materials for molecular separation applications, and their subsequent...