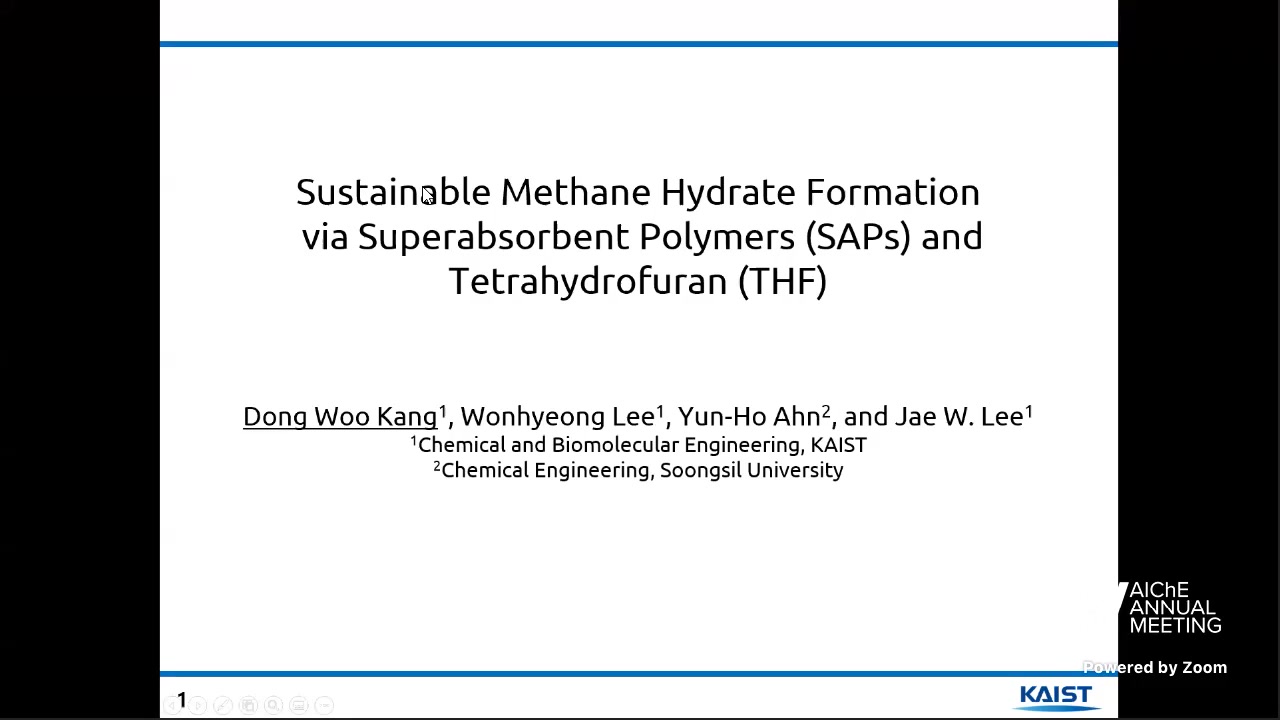 For developing sustainable hydrate-based gas storage system (HBGS), superabsorbent polymers (SAPs) and tetrahydrofuran (THF) were introduced for the methane hydrate formation. With THF-absorbed SAPs, methane hydrate was formed immediately without induction time. These nucleation behaviors were maintained over 20 cycles of formation-dissociation, indicating that THF-absorbed SAPs could be utilized for the sustainable hydrate formation in a non-stirred system. Also, from simulating real enclathration/regeneration process by adding ventilation/recharging step of methane gas during formation-dissociation cycles,1 the storage capacity of methane hydrates was slightly declined from the loss of volatile THF during ventilation step. However, due to â€˜tuning phenomenaâ€™ of THF, the capacity of methane hydrates eventually reached a constant value. From Raman and power X-ray diffraction (PXRD) spectroscopy, it was revealed that methane molecules were partially occupied 51264 cages, resulting in a constant storage capacity. This work can provide insights into designing a sustainable hydrate-based gas storage system without energy-intensive mechanical agitation.

Preview Presentation:
Presenter(s):
Yun-Ho Ahn
Dong Woo Kang
Wonhyeong Lee
Jae Lee
Once the content has been viewed and you have attested to it, you will be able to download and print a certificate for PDH credits. If you have already viewed this content, please click here to login.

Integrated Complexes - A Luxury or Business Necessity?
The presentation will cover the refining and petrochemical industry trends, the challenges to staying in business and be profitable in the marketplace,...
Options for Reuse or Recycling of Wind Turbine Blades
The use of wind energy has expanded significantly in the last 20 years. It began the century as a niche energy source in Europe and the United States and ended...