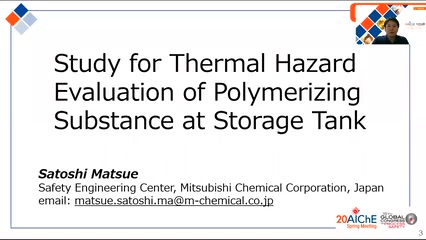 The purpose of this study is to establish a â€œfastâ€ and â€œaccurateâ€ method for estimating the induction period until occurrence of runaway reaction and effect of shortstopping in an emergency.

For the estimation of effect of added polymerization inhibitor, the thermal equipment was improved for that could measure a series of phenomena from detection of the start of runaway reaction to the effect of shortstopping by added polymerization inhibitor. An appropriate concentration of an inhibitor and timing of addition are clarified by the equipment, it would be possible to propose to more effective emergency measures quantitatively.

Establishing estimation method in this study can be useful for improving safety handling in storing polymerizing substances and evaluation of the risk for runaway reaction fast and accurately.

Preview Presentation:
Presenter(s):
Carl Matsue
Satoshi Matsue
Carl Pasquarelli
Satoshi Pasquarelli
Once the content has been viewed and you have attested to it, you will be able to download and print a certificate for PDH credits. If you have already viewed this content, please click here to login.

Understanding and Managing the Risk during Transient Operations
Although discussions on abnormal operations have often included both process or equipment start-ups and shut-downs, these operating modes differ from temporary...
Overview of Inherently Safer Technology
Best CCPS paper from 2010 GCPS