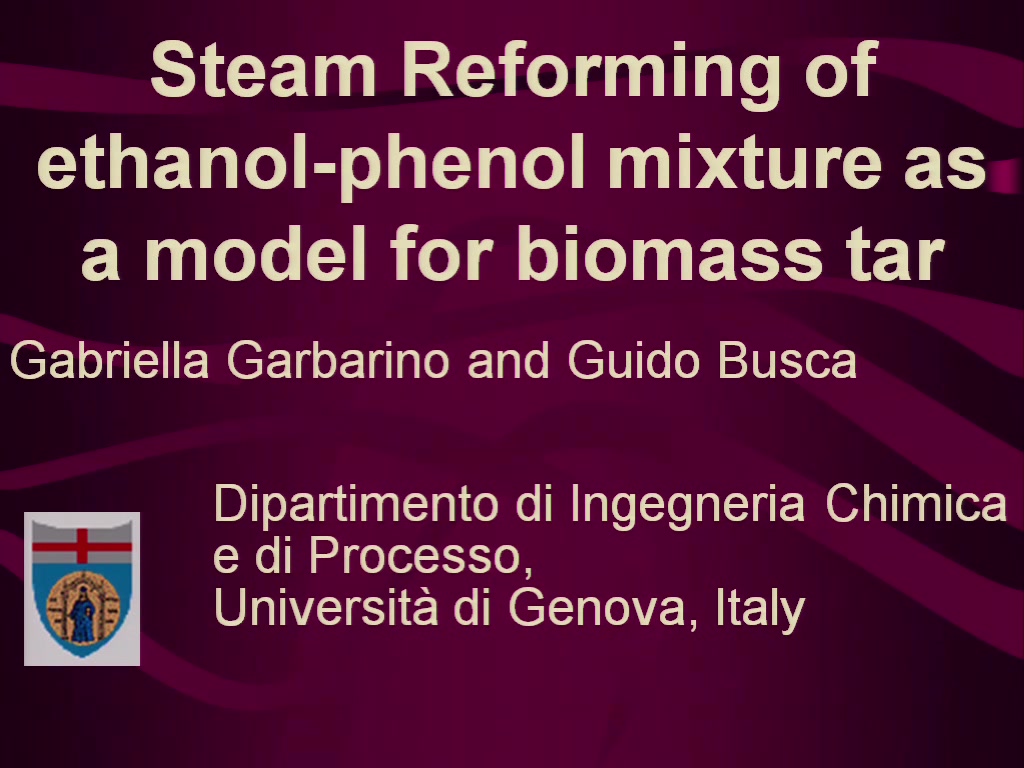 Hydrogen is produced by biomasses through a variety of pyrolysis and gasification processes. Most of these processes are hampered by the coproduction of tars, a mixture of heavy compounds that may result in fouling of heat exchangers and reactors. A steam reforming step is needed to remove such noxious compounds. Studies report that phenol is the main component of tars after low temperature gasification. However, tars are complex mixtures of heavier and lighter compounds. In previous paper we have reported the results on steam reforming of bioethanol. To model tar feed we decided to mix phenol with ethanol. The presence of ethanol in ethanol-phenol-water solutions allows to increase phenol-to-water mole ratio in a single liquid phase.

Differet families of catalysts have been used. 5%Ni/Al2O3, 2.5%Ni-2.5%Co/Al2O3, 5%Co/Al2O3 and Ni50%/Al2O3 have been prepared by conventional wet impregnation of Siralox 5/170 support (Alumina with 5% SiO2 from Sasol, 170 m2/g) using Ni and Co hexahydrate nitrate water solutions. After impregnation, drying at 363K for 8 hours and calcination at 973K for 5 hours have been performed.

A 1 to 1 Ni:Al atomic ratio coprecipitate has been prepared as reported by Busca et al. 1992 . The amorphous precipitate filtered and the cake has been dried at 363K for 8 hours and calcined at 973K for 5 hours. The final catalyst is actually composed of a NiO-NiAl2O4 mixed phase. The preparation of Ni-YSZ and Ni-Co-YSZ catalysts has been described by Resini et al. (2008). The preparation and characterization of NiZnAl, NiMgAl, CoZnAl and CoNiZnAl coprecipitated catalysts has been described previously (Resini et al., 2009; Barattini et al., 2009; Busca et al., 2010).

The catalytic experiments were carried out in a fixed-bed tubular quartz flow reactor, operating isothermally, loaded with 30*10-6 kg-44*10-6 kg of catalyst mixed with 270*10-6 kg-440*10-6 kg of quartz particles (both of them 60-70 mesh sieved). The catalytic tests were performed by feeding stoichiometric water to substrate ratios sufficient to realize steam reforming reactions, or excess water. The results reported are based on reactant conversions, selectivity to carbon-containing products and hydrogen yield vs. temperature, as measured at each temperature when apparent steady state was reached, generally in 1 h.

Products analysis was performed with a gas-chromatograph Agilent 4890 equipped with a Varian capillary column “Molsieve 5A/Porabond Q Tandem” and TCD and FID detectors in series. Between them a Nickel Catalyst Tube was employed to reduce CO to CH4. A six-port valve with a 0.5*10-6 m3 loop was used for the gas sampling of the outlet gases. The sampling of the outlet gases was also made by injection, using a gas-tight with a nominal volume of 0.25*10-6 m3. Furthermore, it is also available a sampling injection point at the end of the preheating zone to analyse the reagents and determine the possible decomposition or change in the feed. Products analysis was also performed on GC/MS (HP GCD plus), in order to have a precise identification of the compounds.

Co based or Co-Ni alloy containing catalysts appear to be even more active and selective than Ni based catalysts in particular at intermediate temperature.

The most relevant selectivity determining step is supposed to be the evolution of acetate ions, assumed to be the key intermediate. The high selectivity to hydrogen and CO2 obtained in the 770-870 K range is attributed to the less reduced state of cobalt in reaction conditions, allowing the evolution of acetate species to CO2 and hydrogen. On more or completely reduced surfaces (with Ni and/or less water in the feed) acetates decompose preferentially producing CH4 and COx.

The catalytic test were performed feeding 80*10-6 Nm3/min containing 70% He(carrier gas), 27% water, 2% ethanol and 1% phenol. Experiments have been performed using Co/Al2O3, Ni/Al2O3 and Co-Ni/Al2O3 catalysts (5% metal). In this case Co–containing catalysts appear to be far less active than pure Ni catalyst, in fact at low temperaure we have different alkylates and at high temperature we have different lighter byproducts as methane and ethylene.

Over the 5% Ni/Al2O3 catalyst we find a very high conversion of both ethanol and phenol already at 721 K. However, most of phenol is actually converted into alkylate C8 and C10 compounds. It is in fact well known that both acid and basic catalysts can catalyse the phenol alkylation reaction by ethanol. Several different alkylated phenol compounds are observed. Additionally, ethanol is also converted into ethylene and acetaldehyde and, to a small extent, to CO and CO2. By increasing temperature to 810 K the phenol alkylation reaction disappears and conversion of phenol drops to near zero. Also ethanol conversion decreases, still producing ethylene, acetaldehyde and carbon oxides. By further increasing reaction temperature, also steam reforming of phenol occurs. At 951 K both ethanol and phenol are almost totally steam reformed to give a mixture of CO and CO2. The hydrogen yield obtained at this temperature is very high being really only limited by position of the water gas shift equilibrium at high temperature. Experiments performed with impregnated catalysts richer in Ni i.e. 20% and 50% Ni/Al2O3 showed that alkylation activity at low temperature is much decreased by increasing Ni content. This allowed us to attribute the alkylation catalytic behaviour to alumina not covered by Ni. On the other hand, by increasing Ni loading the steam reforming activity is strongly increased. The catalyst richer in Ni at these temperatures converts almost all the feed, ethanol and phenol, to CO+CO2, with very small amounts of methane, ethylene, ethane and benzene. At 870 K CO and CO2 with traces of methane are the only detectable products over 50% Ni/Al2O3 catalyst.

Over Ni-NiAl2O4 catalyst prepared by coprecipitation (Ni:Al a.r.= 1) the alkylation of phenol is negligible with the only detection of vinylphenol, while also some dehydroxylation to benzene is observed. However this catalyst has similar activity in steam reforming as the 50%Ni/Al2O3 catalyst prepared by impregnation, allowing complete steam reforming of both reactants already at 860 K. Hydrogen yield ranges 90% at high temperature (850-950 K). Preliminary duration tests showed that the catalytic activity of the coprecipitated Ni-Al catalyst did not change after 6 h on stream at 863 K.

The ex hydrotalcite NiZnAl catalyst (Ni:Zn:Al 50:21.29) is also very active allowing the almost complete conversion of both reactants already at 824 K. The only relevant difference is the production of significant amounts of benzene by conversion of phenol at 738 K. Also in this case, yields to hydrogen are very high at high temperature (90%).

Preview Presentation:
Presenter(s):
Guido Busca
Once the content has been viewed and you have attested to it, you will be able to download and print a certificate for PDH credits. If you have already viewed this content, please click here to login.