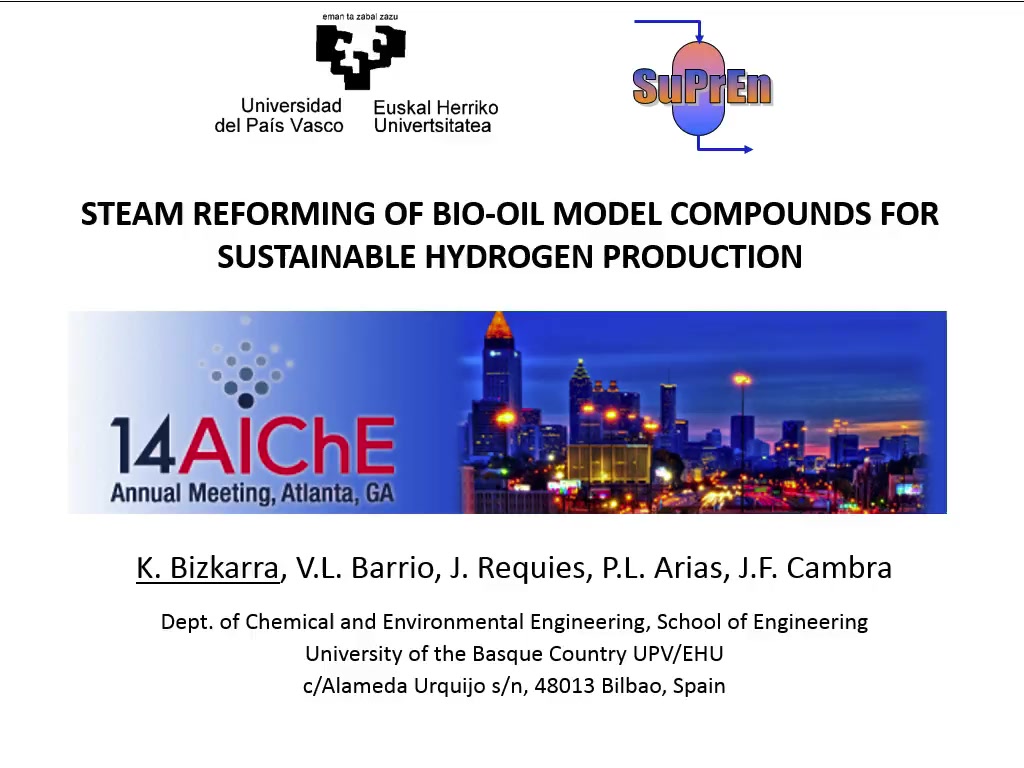 1Dept. of Chemical and Environmental Engineering, School of Engineering

University of the Basque Country UPV/EHU

Hydrogen production has attracted great interest as a future clean energy fuel because of its potential applications in transportation and production of electricity. Nevertheless, in order to avoid CO2 emissions during hydrogen production processes [1], the use of sustainable resources (biomass or bio-fuels) for hydrogen production may represent a good option to partially satisfy the energy demand [2], as it is considered renewable, available, and carbon-neutral source.

In this sense, biomass derived bio-oils are easily obtained and are recognized as appropriate fuels for hydrogen production [1]. Bio-oils are a complex mixture of high and low molecular weight, single and multifunctional hydrocarbons [3]. Therefore, in order to gain further insights into bio-oils reforming processes, model compounds have been widely studied in steam reforming conditions, like acetic acid [4], ethanol [2], and butanol [3], among others, as well as thermodynamic analysis [5].

In this work butanol and m-xylene were selected as bio-oil representative model compounds (oxygenated and non-oxygenated) to be studied during the Steam Reforming (SR) process. For this purpose, Ni based systems using doped alumina were used. But the main goal of this work is the use of the best catalytic systems for the butanol and m-xylene steam reforming process in order to produce hydrogen. Catalysts are going to be characterized using inductively coupled plasma atomic emission spectrometry (ICP-AES), N2 physisorption, temperature programmed reduction (TPR), H2 chemisorption, X-ray diffraction (XRD) and X-ray photoelectron spectroscopy (XPS) techniques. These results are correlated with the activity results obtained.

Activity tests were carried out using a Microactivity Reference (PID Eng&Tech) bench scale plant and two gas cromatographs for gas and liquid product analysis. A 316 stainless-steel fixed bed reactor (9 mm i.d. and 30.5 cm length) was used in all the experiments, as a conventional reaction system.

The fed gaseous mixture flows were adjusted by electronic controllers and two HPLC-Gilson liquid pumps were used for the bio-oil model compound and deionised water injection. The reaction products were cooled in a partial condenser.

The condensed liquid was collected, weighted and offline analyzed with a gas chromatograph equipped with TDC and FID detectors. The gas phase was online analyzed with another gas chromatograph equipped with the same detectors. Two columns were used in a series arrangement for the complete separation of the components of the gas phase, such as hydrogen, methane, carbon monoxide and carbon dioxide.

One nickel based catalysts serie is being tested in this work, where the commercial alumina support has been modified by the addition of Ce and La oxides .

The presence of nickel is an important parameter for the catalytic process because metallic nickel activates the organic molecule, breaking O-H, C-C and C-H bonds and promotes the reaction of organic fractions with the OH groups of water [6].

N2:H2 mixture during 4 h. All tests were carried out at atmospheric pressure and at a Steam to Carbon (S/C) ratio of 5.0 and different reaction temperatures, from 1073 K to 873 K. All the tests lasting 4 hours to check which conditions are optimum to obtain the highest hydrogen yields and to make comparisons between catalysts.

On the other hand, long term activity tests (8h) at the selected temperatures were carried out in order to study the stability of the catalysts.

First, all catalysts were characterized using ICP-AES technique to determine their metal content, contained in Table 1.

According with ICP-AES measurements, catalyst metal content is very close to the desired composition, for all metal or metal oxides present.

Alumina supported nickel based catalysts showed a similar behavior during the tests at 800 ºC, regardless of the support modifications. They reached a hydrogen yield of 80%.

When reaction temperature was reduced to 700 ºC, bare alumina supported catalyst and the catalysts supported on CeO2-Al2O3 maintained the hydrogen yield reached at 800 ºC. However, Ni/La2O3-Al2O3 catalyst slightly reduced it hydrogen yield.

Comparing initial and final hydrogen yields at 800 ºC, it can be observed how the catalysts with the support modified with a metal oxide maintain their initial activity after the tests at different temperatures. On the other hand, during the final reaction step at 800 ºC, Ni/Al2O3 catalyst shows a hydrogen yield lower than the initial, which could be related to deactivation processes.

The main goal of this work is the valorization of the bio-oil for hydrogen production, in order to promote the intensive application of renewable resources like the biomass.

When higher temperature is employed, the activity and hydrogen yield is almost the same in bth

Extensive catalyst characterization is being finished, and their correlations with activity results will be included in the final work.


Preview Presentation:
Presenter(s):
Kepa Bizkarra
Once the content has been viewed and you have attested to it, you will be able to download and print a certificate for PDH credits. If you have already viewed this content, please click here to login.

Examining Combustion Control Options for Fired Heaters and Boilers
Energy efficiency, safety, and environmental impact are all important issues concerning any type of combustion operations. Variability in the combustion...
Pt Nanocrystal Catalysts Reveal Effect of Support Acidity and Role of Water on Propane Combustion
Support effects in catalysis are important in determining the catalytic activity of supported phases through geometric and electronic effects. Here, we present...