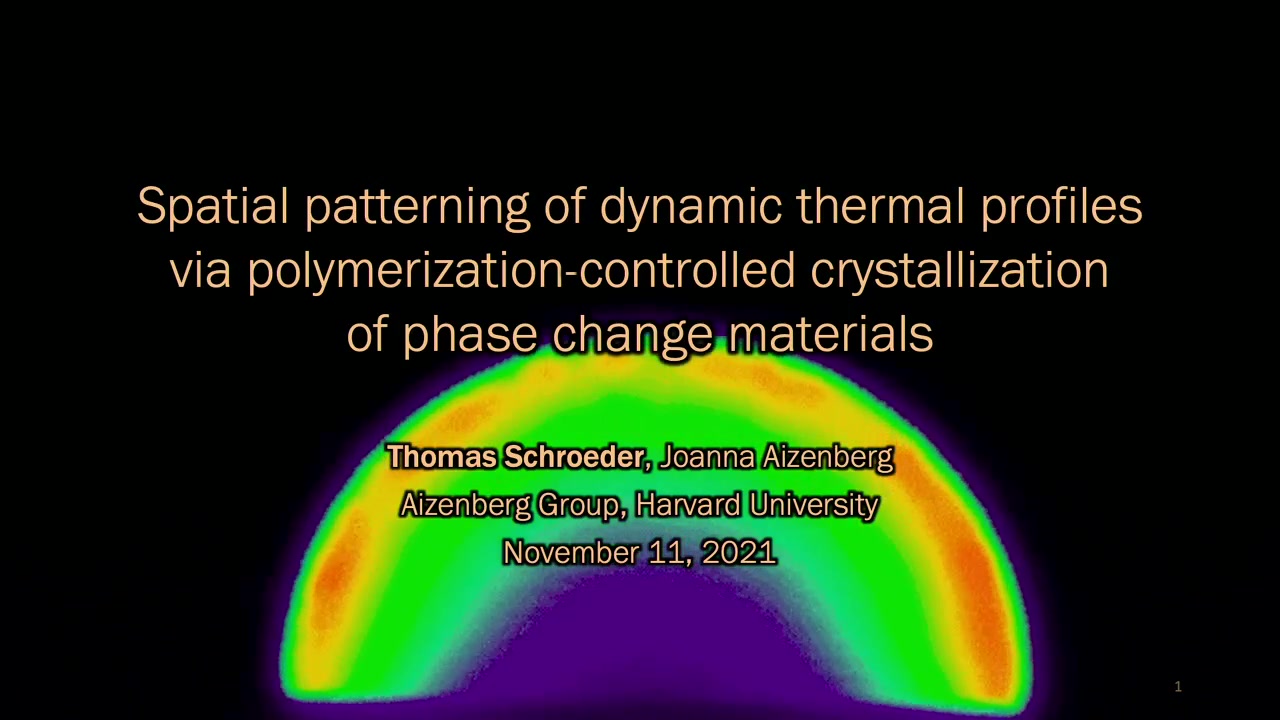 Problem: The library of engineered processes that leverage the chemistry and phase behavior of polymers, liquid crystals, and other materials to transduce heat into chemical, optical, and mechanical changes is large and growing. However, deploying these processes to produce complex, useful, and robust responses in the context of devices or adaptive materials often remains challenging. For example, achieving spatially patterned end effects from such processes requires spatially patterned heat sources; photothermal and ohmic heating are often used for this purpose, but each is subject to design constraints such as requiring externally provided energy at the moment of actuation. Some â€œphase change materialsâ€ such as salt hydrates can store thermal energy for later release on demand via the fast, exothermic crystallization of metastable supercooled melts. However, as applications of this phenomenon have mostly involved raising the temperature in a bulk volume, little attention has been thus far been paid to characterizing or controlling the spatial and temporal evolution of the resulting temperature profiles beyond altering the design of the reservoir.

Results: In this work, we demonstrate that when polymerizable additives are added to metastable supercooled phase change materials, the crystal growth front velocity following nucleation -- and thus the velocity and peak temperature of the heated region â€“ depends strongly on whether the additives have been polymerized. We thus have employed photopolymerization through masks to pre-define pathways of crystal growth and heat release, enabling us to program â€œhotspotsâ€ of up to 45ËšC (from room temperature) in patterns such as geometric arrays or letters that spell out a message. We demonstrate that these hotspots can induce the contraction of thermoresponsive hydrogels and phase changes in other materials. The nature of the system boundaries significantly affects the evolution of the temperature profile reached within the crystallizing solution; when placed on a heat sink that encourages dissipation, the temperature profile centered around the moving front quickly reaches a steady state that is well-described by a one-dimensional analytical model. The velocity of the growing crystals is controlled under some circumstances by interfacial kinetics and likely defined by the adsorption of additives in their polymerized or unpolymerized state. The model reveals that the up to sevenfold difference in crystallization velocity fully accounts for the peak temperature difference (up to 15ËšC) between masked and unmasked areas.

Methods: After preparing metastable aqueous solutions containing a supersaturated salt, a photoinitiator, and acrylic monomers with or without cross-linkers present, we use UV light to initiate free radical polymerization in flat channels through photomasks. We then introduce a seed crystal to the solution and subsequently monitor the spatial and thermal evolution of crystal growth by recording video with standard and infrared cameras and a microscope with crossed linear polarizers.

Implications: The crystallization process described here transduces and amplifies a simple stimulus (the introduction of a microscopic seed crystal) into a large, complex, and energy-intensive response (patterned crystallization and heat evolution that scales with solution volume). As demonstrated in this work, this process can be coupled to downstream thermally activated processes, allowing them to proceed with spatial resolution and controllable dynamics; such schemes could guide the future design of dynamic surfaces for antifouling, soft robotics, and microfluidics. The wavelike temperature profiles that this technique creates position it well to enable peristaltic movements in particular, which can be used for locomotion or payload delivery. More broadly, the insight that patterned polymerization can be used to guide crystal growth may be relevant when applied to crystallizing systems of all types.

Preview Presentation:
Presenter(s):
Joanna Aizenberg
Thomas Schroeder
Once the content has been viewed and you have attested to it, you will be able to download and print a certificate for PDH credits. If you have already viewed this content, please click here to login.

Continuum Simulations of Multiphase Heat and Mass Transfer in Wet Granular Mixtures Modeled As Separated Phases
Heat and mass transfer considerations in multiphase flows such as wet granular mixtures, where solid, liquid, and gas co-exist, are important in many...
Scale-up of Heat Transfer in an Agitated Dryer: Simulations and Experiments
Processing of particulates plays an important role in a wide variety of industries, including the pharmaceutical industry, the bulk chemical industry, and the...