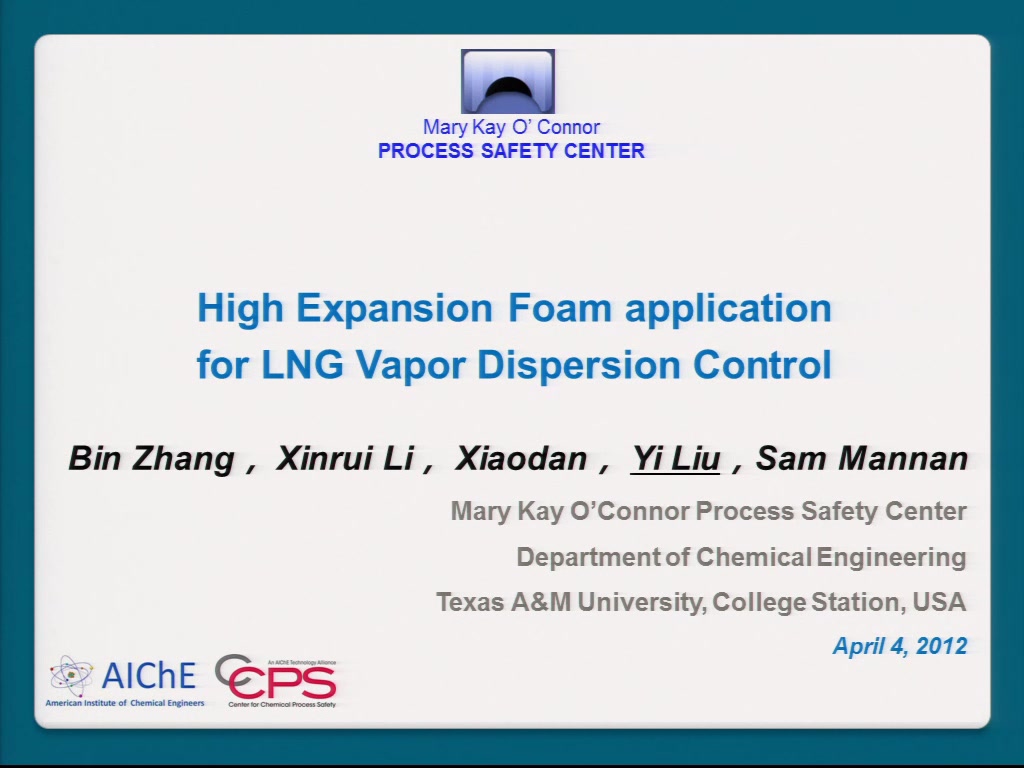 The formation of a flammable vapor cloud following a spill of cryogenic liquids, such as ammonia and LNG (liquefied natural gas), on a ground or water includes significant toxic, fire or explosion hazards. The ability to predict the consequences of such an event is crucial to perform proper risk assessment. Numerous researchers have been focused on the modeling of the vapor cloud dispersion. However there is a lack of accurate source term model describing the vapor cloud source, which has obviously an effect on the predicted exclusion zones.

Webber et al. [Webber, DM; Gant, SE; Ivings, MJ; Jagger, SF. LNG source term models for hazard analysis: A review of the state-of-the-art and an approach to model assessment. 2010] prepared a wide literature review of LNG source term models as well as the experimental data available to validate them. Eighteen models, most of which are integral and two of them are computational fluid dynamics (CFD) codes (FLACS by GexCon and Liquid Spill Modeling System by Cambridge Environmental Research Consultants) are briefly reviewed. All models differ primarily regarding assumptions, simplifications or/and correlations.

A boiling model, as one part of the source term modeling of cryogens, has been developed by using CFD code. Different boiling phenomena, including film boiling, transition boiling and nucleate boiling, are identified by the presented model. The vaporization rate can be calculated depending on the ground temperature. The boiling model by CFD method can give a more accurate result than integral models or empirical correlations, especially when a complex geometry of the spill and surrounding is considered.

Based on the boiling model, the pool formation and vaporization during cryogenic liquid spill on ground and/or water are studied in this paper. Liquid nitrogen is chosen as a safe analogue. The effects of the surface type (ground or water), hot surface conditions (temperature, slope, etc), weather conditions and two-phase boiling flow rate are discussed and compared against experiments or/and literature data.

Preview Presentation:
Presenter(s):
Yi Liu
Once the content has been viewed and you have attested to it, you will be able to download and print a certificate for PDH credits. If you have already viewed this content, please click here to login.

Petascale High-Fidelity Simulation of Turbulent Reactive Flows: Challenges and Opportunities
The rapid growth in computing power has presented both opportunities and challenges for high-fidelity simulations of turbulent reacting flows. The advent of...
Project Scheduling Algorithm Addressing Shared Due Dates
We study the single-mode Resource-Constrained Project Scheduling Problem (RCPSP) with renewable resources. The RCPSP schedules start times for activities of a...