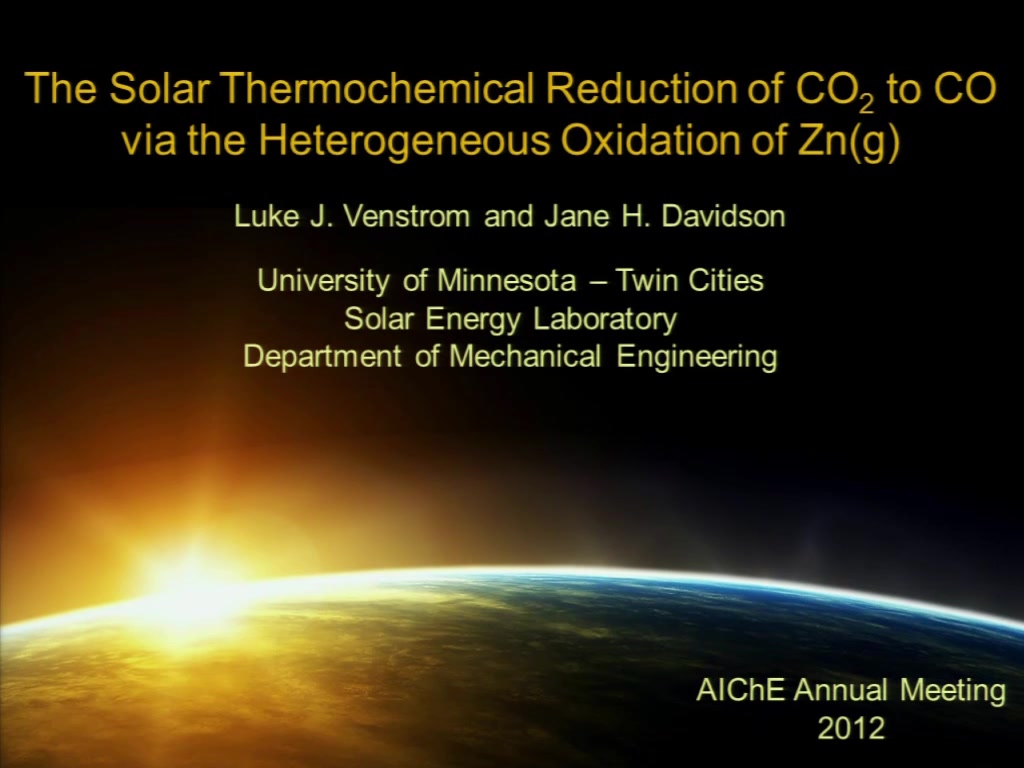 The heterogeneous oxidation of Zn(g) is a promising means of sustainably reducing CO2 to CO in the two-step Zn/ZnO solar thermochemical cycle. Prior efforts on CO2 reduction in the cycle have focused on the oxidation of solid or liquid Zn, and elucidate the need for faster kinetics. The rate of the oxidation of solid and liquid Zn is limited by solid-state diffusion through the ZnO layer that forms on the Zn surface. To eliminate the solid-state diffusion barrier, we propose reducing CO2 to CO via the heterogeneous oxidation of Zn(g). The Zn(g) oxidation pathway promises complete and raid conversion of Zn, which ultimately increase cycle thermal efficiency. Cycle efficiencies of 30% are possible even when additional energy must be supplied to vaporize zinc, and the cycle efficiency could be higher if heat recuperation was implemented.

Experiments were conducted in a tubular flow reactor maintained at atmospheric pressure to elucidate the kinetics of Zn(g) oxidtion. The rate of the heterogeneous oxidation of Zn(g) was measured gravimetrically. Temperatures were varied between 800 and 1150 K, and Zn(g) concentrations up to 57 mol% were achieved, extending the range previously considered in the literature. A range of reacting gas compositions were considered with CO2-to-Zn molar ratios ranging between 1 and 60. CO production was monitored with a Raman laser gas analyzer. A numerical model decouples the surface kinetics and the transport of reacting species in the gas phase from the global reaction rate.

Figure 1 shows the measured and predicted rates of the heterogeneous oxidation of Zn(g) along the axis of the tube flow reactor for temperatures between 800 and 1150 K. The oxidation of Zn(g) by CO2 is rapid, on the order of 10-8?10-5 mol cm-2 s-1, representing at least an order of magnitude increase over the rates typically observed in the interface-controlled regime of Zn(s) particle oxidation. The best fit between the reaction rate data and the numerical model is obtained using second-order kinetics, with Zn(g) and CO2 both behaving as first-order reactants. The activation energy for the Arrhenius reaction rate constant is 44±3 kJ/mol and the preexponential factor is (92±6)×10-3 mol cm-2 s-1 atm-2. As a result of the rapid rate of oxidation of Zn(g), less than one second is required to convert more than 85% of the Zn to ZnO.

The present work confirms that substantial improvements in the thermal efficiency of the Zn/ZnO thermochemical cycle for reducing CO2 to CO are possible if the critical Zn oxidation step were to utilize the heterogeneous oxidation of Zn(g). Additionally, the kinetic expression obtained for the heterogeneous oxidation of Zn(g) is suitable for reactor design and scale-up since it reflects the intrinsic surface kinetics, and is not influenced by mass transfer.

Preview Presentation:
Presenter(s):
Luke J. Venstrom
Once the content has been viewed and you have attested to it, you will be able to download and print a certificate for PDH credits. If you have already viewed this content, please click here to login.