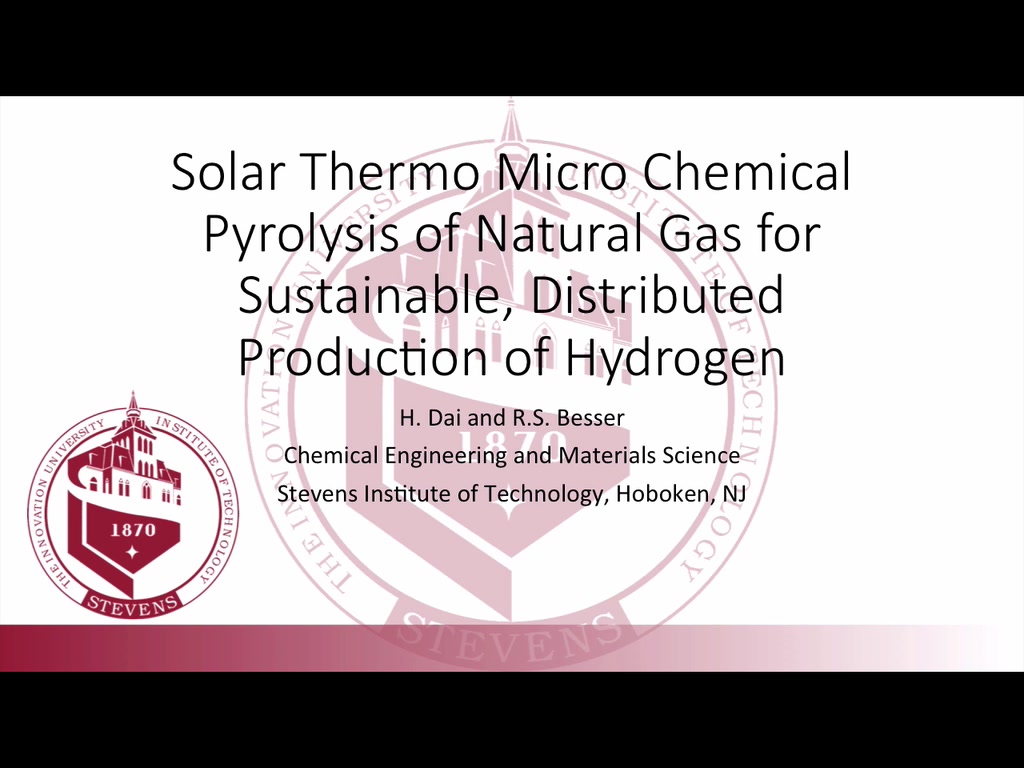 The recent growth in usable reserves of natural gas (NG), domestically and globally, could provide a tremendous boost for clean, carbon-free energy generation based on hydrogen. This is true if the H2 in this plentiful source could be harvested with little or no contribution to atmospheric carbon, which is increasingly deemed as unacceptable to society because of its impact on the climate.

We propose a new process for the conversion of NG to hydrogen by perhaps the cleanest route imaginable: implementing a sustainable source of energy to activate the decomposition of NG to its base components: H2 gas and solid carbon. The H2 is used for the generation of clean energy in fuel cells or by combustion, while the carbon is a feedstock for a number of industrial products. Moreover, the carbon may be sequestered simply and directly by safe and environmentally benign disposal into the earth, akin to the creation of a man-made coal deposit.

The decomposition is carried out by the use of direct solar thermal heating of micrchemical reactors which are matched in scale to concentrating optics that focus the solar radiation. While solar thermal chemical processing is an established technology, facilities envisioned for this kind of processing rely on large centralized processes running at the highest scale possible. These facilities require large land tracts and numerous specialized, costly heliostats with large reflecting surfaces to gather and direct the energy. By contrast, the process we describe here depends on miniature reactors with cm-scale, conventional, low-cost optics that together form a modular concept. Scalability is inherent and is a great asset: a small number of modules together may be used to produce hydrogen on-site in a small demand scenario; high demand of hydrogen product is obtained by the simple addition of modules. In this way, research and development focusing on the creation of a unit module may then be quickly leveraged to produce a larger scale process with greater simplicity than conventional scale-up approaches.

The process possesses the benefits that were wrought by the movement toward microchemical systems of the past two decades with a view toward distributed vs. centralized processing: simplicity, scalability, modularity. In the generation of electrical power, there are clear, established advantages to on-site and on-demand generation of hydrogen and subsequently electrical power for efficiency, sustainability, and overall cost.

We present here the results of a detailed modeling study of the modular concept based on a reaction engineering approach at the core. The model takes into account reactor parameters (length, catalyst loading, flow conditions, temperature, etc.) necessary for acceptable decomposition conversion, as well as the heat transfer surface area needed to sustain reaction temperature via concentrated solar illumination. The optics are sized with consideration of adequate optical flux collection to meet the demand for endothermic reaction energy, while also remaining as small as possible to minimize physical footprint of the process module. In addition, the solid catalyst utilized is of particular concern for the meeting of cost and renewability requirements for adequate system lifetime; various candidates are considered.

This work has significant potential to launch a new research direction in NG conversion and to expand the new field of solar thermo microchemical processing.

Preview Presentation:
Presenter(s):
Ronald Besser
Once the content has been viewed and you have attested to it, you will be able to download and print a certificate for PDH credits. If you have already viewed this content, please click here to login.