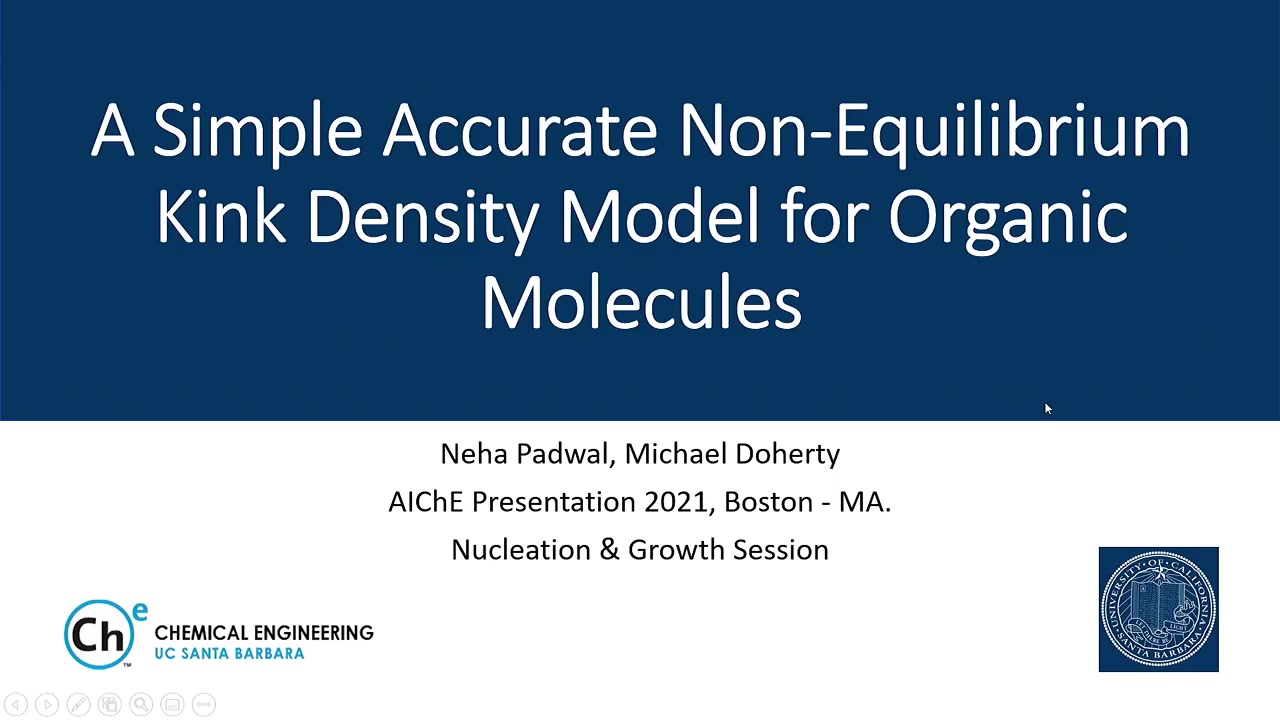 Layered crystal growth regimes, such as the spiral and 2D nucleation & growth regimes, are preferred for controlled crystallization conditions. In these regimes, steps flow across the surface of the crystal at a certain rate [1]. Hence, a key parameter in crystal growth models is the step velocity, which is a function of density of kink sites along the step. Kink sites are favorable sites for growth unit attachment because of their low energy penalty and regenerative ability. Supersaturation dependence of kink density is frequently disregarded and approximated to its equilibrium value, despite the availability of non-equilibrium kink density models [2, 3]. Previous work by Cuppen et al., (2002) [2] formulated a rigorous steady-state framework for modelling multi-height kink density, which considers all possible step configurations (28 is total). In addition to kinks, these configurations include many low-probability events such as multi-height nuclei, multi-height pits, etc. Joswiak et al., (2018) [3] devised a one-dimensional nucleation framework for non-equilibrium kink density modelling. Both these approaches exhibit excellent agreement with kinetic Monte Carlo (kMC) simulations of step velocity as a function of supersaturation. However, neither approach readily extends to the more realistic situation of non-centrosymmetric (molecules without an inversion center) molecular growth units, as encountered in the crystallization of API molecules. Kink density deviates strongly from equilibrium behavior at high supersaturation and low kink energy. This necessitates a non-equilibrium kink density model, precise enough to capture dominant supersaturation effects and simple enough to be applied for a range of molecules.

This work simplifies the steady-state framework of Cuppen et al., (2002) [2] for centro-symmetric molecules with a focus on only the dominant configurations. Such a methodology yields a steady-state kink density model as a function of supersaturation for centro-symmetric molecules. Various nano-scale processes occurring along the crystal surface such as the nucleation and kink collision events [3], form, destroy, or retain the number of kinks. This steady-state approach involves balancing the rates of kink forming events with rates of kink destroying events to capture supersaturation effects on kink density. The set of master equations obtained for each type of kink under consideration, can be solved to obtain closed-form steady-state kink density expression. Only single and double height kinks are considered, while multi-height kinks are neglected due to their low probability. The effective single-height kink density can then be estimated for step velocity predictions. The resulting model is simple to derive and agrees with supersaturation-dependent kMC simulations. Such a steady-state methodology can be potentially extended to account for the general class of non-centrosymmetric molecules by extending the master equations to account for the different types of kinks along the edge. Such a model would enable extension of current mechanistic crystal growth models to API molecules at all supersaturations.

Preview Presentation:
Presenter(s):
Michael F. Doherty
Neha Padwal
Once the content has been viewed and you have attested to it, you will be able to download and print a certificate for PDH credits. If you have already viewed this content, please click here to login.