In silico discovery of Target Peptide Inhibitors for C. Diff toxins a and B | AIChE
Skip to main content

In silico discovery of Target Peptide Inhibitors for C. Diff toxins a and B 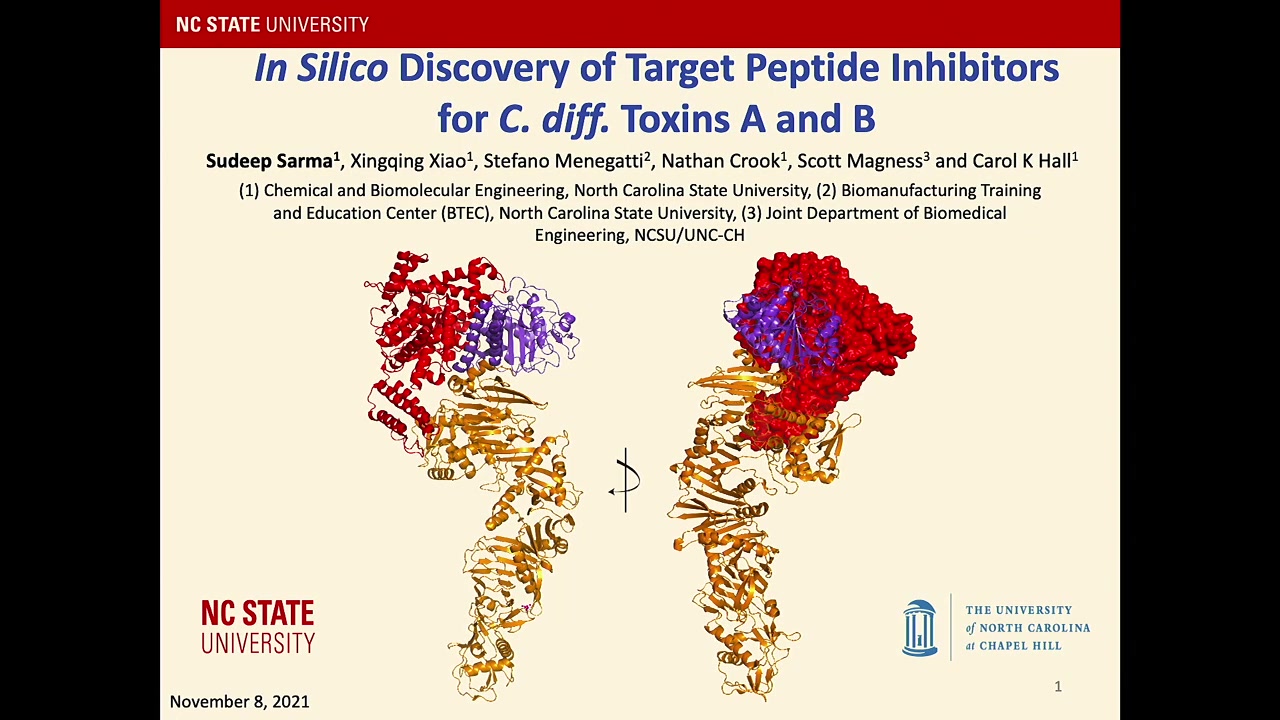 Clostridium difficile infection is the leading cause of diarrhea and colitis (inflammation of the colon) in North America and Europe. The fraction of the population infected by the disease is increasing as new strains associated with significant morbidity and mortality have appeared. There is a growing concern about the failure of the first line of treatment for C. diff infection (metronidazole and vancomycin) and thus, current attention is focused on the need for alternative treatment options like biologic drugs which are safer and more efficacious. A viable and cost-effective strategy is the development of targeted peptide-based therapeutics that prevent and treat C. diff infections by deactivating the pathogen while leaving the resident gut microbiota unharmed.

During infection, the C. diff pathogen produces two large virulent toxins (Toxin A and B) that share 71% sequence homology. The glucosyltransferase domain (GTD) of these toxins acts by binding UDP (Uridine diphosphate)-glucose, hydrolyzing it into glucose and UDP, and attaching the glucose monomer to the human Rho family of GTPases. Glycosylation of the GTPases by TcdA and TcdB GTDs leads to disruption of the cytoskeleton, apoptosis and cell death.

The objective of this project is to computationally design peptide inhibitors that bind with high affinity and specificity to the glucosyltransferase domain of C. diff toxins A and B to inhibit its activity. We have been successful in developing a proof-of-concept disruptive computational approach to design peptides that bind to a biomolecular target with high affinity. Our peptide search algorithm employs Monte Carlo methods, self-consistent mean-field theory, and the concerted rotation (CONROT) technique to search for peptides in sequence and conformation space that bind to a target protein. The starting input structure for the algorithm requires a reference ligand which is usually an experimentally determined peptide sequence that has a good binding affinity to the target protein.

We have discovered two peptides inhibitors, NPA and NPB, using EGWHAHTGGG (Kd = 100 nM) as the reference ligand, a peptide identified by the Feig lab using phage display. Simulations of NPA and NPB at the binding site of Toxin A show that they have a high affinity for the toxin. We estimated the binding free energies for these peptides and found that they were better binders than the reference ligand. The peptides have shown good neutralization against Toxin A when tested in vitro in jejunum (intestinal) cells but showed no effect in colon cells. Current work is focused on furthering our understanding of the interaction of these peptides with the toxins, redesigning shorter peptide inhibitors for Toxin A, and discovering peptides that can bind to Toxin B.

Preview Presentation:
Presenter(s):
Nathan Crook
Carol Hall
Scott Magness
Stefano Menegatti
Sudeep Sarma
Xingqing Xiao
Once the content has been viewed and you have attested to it, you will be able to download and print a certificate for PDH credits. If you have already viewed this content, please click here to login.

Transfer Learning for Prediction of Absorption and Emission Spectra from Multi-Fidelity Data
Accurate predictions of optical properties from chemical structure are necessary for the design of optimal dye molecules towards important applications such as...
Computational Evaluation of Plasmonic Photocatalysis in Au and Ag Nanoparticles
Many industrial chemical processes require high operating temperatures to drive catalytic reactions which are crucial to human development. These high...