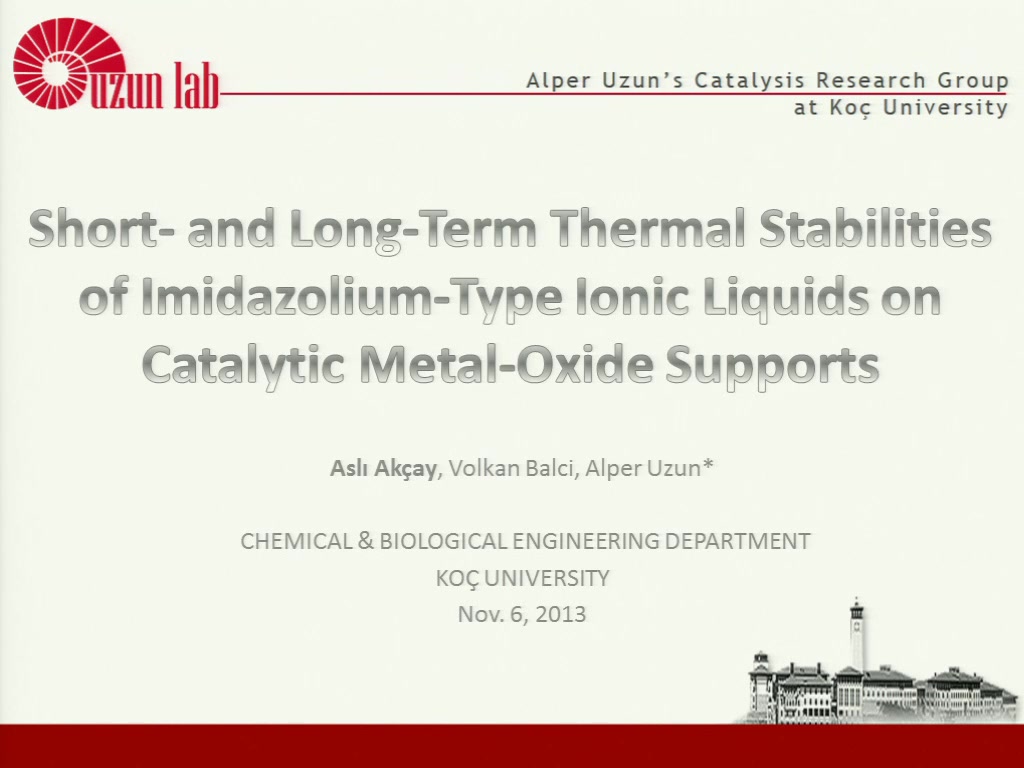 Ionic liquids (ILs) have been attracting tremendous attention in the last few decades because of their unique physicochemical properties , such as negligible vapor pressure , high thermal stability , high solvating capacity , and wide ranges of density and viscosity. With these tunable characteristics , they have become the first choice in many applications such as organic synthesis , electrochemistry , separation , and especially in catalysis.

In catalysis field , two directions of IL application recently discussed in the literature are particularly attractive: supported ionic liquid phase (SILP) catalysts and solid catalysts with ionic liquid layer(SCILL). Here , the utilization of ILs in these catalysts not only provides opportunities to control and stabilize the nuclearity and morphology of the active sites , but also offers the following opportunities to improve the catalytic performance: i) ILs can impose a positive influence on the “chemical” properties of the catalysts by acting as a co-catalyst , either as an acidic function in a bifunctional catalyst or as a modifier; ii) ILs can control the effective concentration of reaction intermediates and stabilize charged transition states or ligands to control the reaction pathways. SILP type catalysts , where active species dissolved in IL , act as a homogeneous system immobilized on a high surface area porous solid support offering the benefits of heterogeneous systems. Since support enables a higher surface area and IL enables the better utilization of catalyst particles in the pores , the system results in the higher selectivity and activity compared to traditional catalysts. Similar to the SILP catalyst concept in SCILL applications , a supported metal catalyst is coated with IL layer.

Short-term thermal decomposition temperatures of ILs supported on metal-oxides were determined by thermogravimetric analysis (TGA) at a linear heating rate of 10 K/min from 298 to 1073 K from the onsets of the derivative per cent weight changes. Results show that thermal stability of pure ILs significantly changes upon coating on metal-oxides with different point of zero charges (PZC) such as < 2.82 for SiO2 , 6-9.3 for γ-Al2O3 and 11.6-12 for MgO. Pure 1-ethyl-3-methylimidazolium tetrafluoroborate [EMIM][BF4] , for example , is reported to be stable up to 723 K; however , our data illustrate that it starts to decompose at 609 ± 3 , 534 ± 3 and 446 ± 3  K when coated on SiO2 , γ-Al2O3 , and MgO , respectively.  In general , imidazolium type ILs lose their thermal stability significantly as the acidity of the support decreases from SiO2 to MgO.  However , ILs with high acidity levels such as those with dicyanamide [DCA]- anion , 1 ,3-dimethoxyimidazolium bis(trifluoromethylsulfonyl)imide [DMOIM][NTf2] and 1 ,3-dihydroxyimidazolium bis(trifluoromethylsulfonyl)imide [DHIM][NTf2] and 1-ethyl-3-methylimidazolium hexafluorophosphate [EMIM][PF6] do not follow this general trend and show higher thermal stabilities on MgO than on SiO2.  Similarly , effects of increase in the length of alkyl groups attached to the imidazolium ring depend strongly on the anion type too.  For instance , thermal decomposition temperatures of [EMIM][BF4] , 1-butyl-3-methylimidazolium tetrafluoroborate [BMIM][BF4] , 1-hexyl-3-methylimidazolium tetrafluoroborate [HMIM][BF4] and 1-decyl-3-methylimidazolium tetrafluoroborate [C10MIM][BF4] were determined on the SiO2 , γ-Al2O3 , MgO metal-oxide supports. Results show that thermal stabilities of these ILs decrease from 609 ± 3 to 502 ± 3 K on SiO2 , from 534 ± 3 to 496 ± 3 K on γ-Al2O3 and from 446 ± 3 to 440 ± 3 K upon step-wise increase in the length of alkyl chain attached to the imidazolium ring from ethyl to decyl. However , when [BF4]- anion is replaced with [NTf2]- , increase in the alkyl chain length of cation does not affect the thermal stability significantly.  Similarly when the butyl chain was replaced with a nucleophilic cyanopropyl group on imidazolium ring with [NTf2]-anion , data does not indicate any effect on the thermal decomposition temperature on the same support. 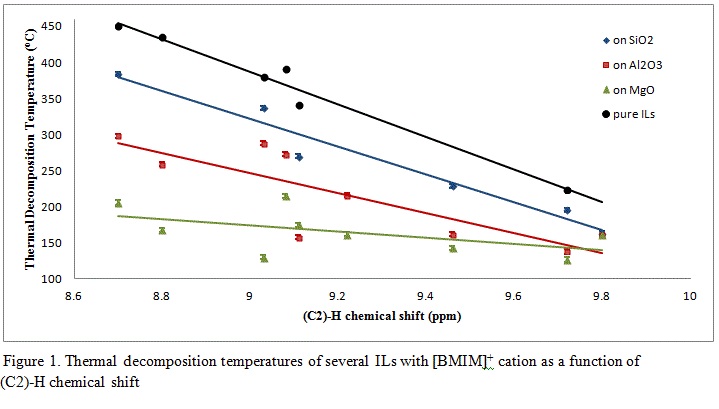 As shown in Figure 1 , thermal stabilities of ILs with [BMIM]+ cation on various metal-oxides vary linearly with the chemical shift value of acidic (C2)-H on imidazolium ring. Moreover , slopes of these lines depend strongly on the PZCs of the metal-oxide supports. Thus , we infer that there is a strong correlation between the thermal stabilities of ILs with their acidity levels and the PZCs of supports.

In order to complement the TGA-based short-term thermal stability results , long-term thermal stability limits of ILs on metal-oxides were also investigated.  For this purpose , ILs on various metal oxides were characterized by FTIR spectroscopy and SEM analysis with EDX mapping before and after 6 hour-long isothermal treatments at various temperatures. Results illustrated that some ILs start to decompose earlier than the temperatures determined by quick TGA scans while others remain intact up to the TGA-determined decomposition temperatures. As an example , on γ-Al2O3 metal-oxide support , [EMIM][BF4] is stable up to the 534 ± 3 K (temperature determined with TGA scans) while [C10MIM][BF4] starts to decompose after 473 ± 3 K , earlier than the TGA-determined temperature.

In summary , results presented here provide the basis for selecting stable ILs for IL-assisted supported-catalysts based on their application conditions.

Preview Presentation:
Presenter(s):
Asli Akcay
Once the content has been viewed and you have attested to it, you will be able to download and print a certificate for PDH credits. If you have already viewed this content, please click here to login.

Planar and Modular Microstructured Reactor With Integrated Palladium Membrane for On-Site Production of Pure Hydrogen
Hydrogen is one of the most important chemicals used in industry today. Over 80% of today’s hydrogen demand is covered by steam reforming of natural gas in...
Distillation Technology for Operators
Gain an understanding of the theory underlying successful distillation processes – and beyond theory, learn what actually happens in a column. This online...