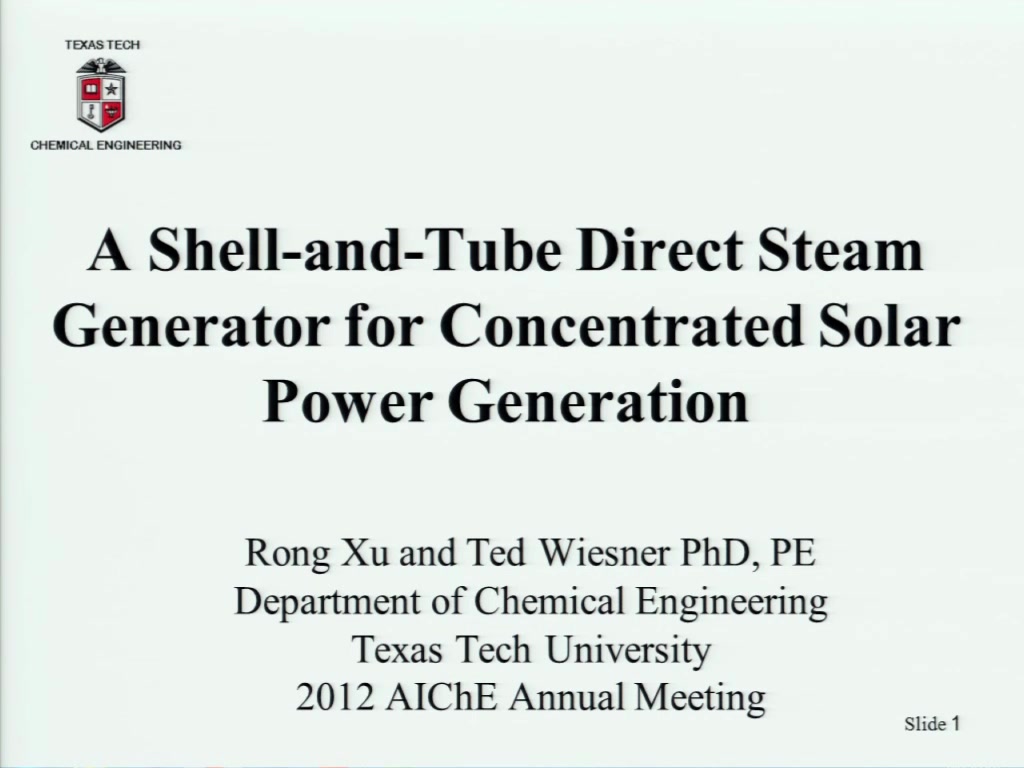 ?Making Solar Energy Economical? is one of the Grand Challenges posed by the National Academy of Engineering. However, innovation in concentrating solar power technologies (CSP) lags by considerable margins that of all other renewable energy technologies. The levelized cost of electricity (LCOE) for solar thermal electricity ranges from ca. 13¢ to 21¢/kWh. Among energy sources alternative to fossil fuels, it is the most expensive, with the exception of crystalline and thin-film photovoltaic technologies. The solar thermal LCOE is currently considerably above electricity derived from coal combustion (8¢ to 14¢/kWh). For a benchmark 100 MWe parabolic trough power plant, the solar field capital cost contributes 4.5 to 6¢/kWh of the LCOE. Reductions in the capital costs and improvements in the efficiency of the collector field are necessary to make solar thermal power more competitive with both fossil fuel electricity and with power derived from other alternative energies.

On the other hand, solar-derived electricity is highly desirable, due to its carbon-free nature and the essentially infinite solar resource.

To reduce the capital cost of the parabolic trough collector field, we propose a new shell-and-tube direct steam generator (STDSG, Figure 1). The shell-and-tube receiver combines multiple pipe bores with a single receiver surface. In the same fashion as current HCEs, sunlight is absorbed by the outer surface of the receiver while molten salt circulates within the shell. However, the shell also contains a tube bundle, within which steam is directly generated. The unit is sized such that enough heat is absorbed and stored in the salt during times of insolation to generate steam off-sun, increasing the dispatchability of the collected power. Figure 1 illustrates the proposed technical advancement of the HCE technology, from a directly irradiated receiver, to a double pipe receiver-generator, and ultimately to a shell and tube receiver-generator. As indicated in Figure 2, we envision replacing the collector field and steam generator with a smaller number of parabolic reflectors and shell-and-tube receivers incorporating direct steam generation.

A shell-and-tube direct steam generator consolidates two major functions in a solar electric generation system: 1) It combines multiple heating tubes into a single irradiated receiver; 2) It eliminates the separate steam generation block. Such process intensification directly reduces the capital and operating costs of the parabolic trough collector field, the single most expensive component of an SEGS, as well as the cost of the power block. An STDSG appears to be a completely novel concept. A thorough review of the open literature reveals no prior work on a directly irradiated shell-and-tube heat exchanger. A review of the US patent literature reveals some devices for solar water distillation that are remotely related. However, none of these patents concern power generation, and none feature a shell-and-tube design with combined energy capture, steam generation, and energy collection for times of low insolation.

A preliminary mathematical model demonstrates the potential of the shell-and-tube direct steam generator. Consider a countercurrent double-pipe heat exchanger that is irradiated on its outer surface. The diameters of the outer and inner pipes are Do and Di, respectively, and the diameter ratio r= Do/Di. Steam condensate perfuses the bore while the molten salt heat transfer fluid flows in the annulus. We now define the solar multiple as the ratio of energy generated by the solar field to the energy required for peak output by the power block. The value of the solar multiple fs should be approximately three in order to sustain 24/7 steady state power production without backup from another fuel source.

The model predicts the results in Figure 3. (Note: In the preliminary model, we have simulated heating the condensate only to saturation temperature due to the complexity of modeling vaporization.) In the left panel, one sees that the temperature of both the annular and the bore fluids increase simultaneously. Therefore, one can heat the bore fluid while on-sun, and accumulate energy in the annular HTM for use off-sun. In the right panel, the solar multiple monotonically increases as the diameter ratio r increases. The desired value of the solar multiple, three, occurs for a diameter ratio of approximately two. This suggests that reasonable geometries are attainable with an STDSG.

We are presently extending the preliminary double-pipe model to a shell-and-multi-tube model in COMSOL®, a finite-element simulation package. In the latter, we are incorporating tube-side vaporization, unsteady-state behavior, and the more intricate shell-and-tube geometry (Figure 4). Figures

Figure 3. Left-Simulated shell-and tube-side temperature profiles in a double-pipe solar receiver. Right-solar multiple as a function of the diameter ratio. Values of key simulation variables are below the plots.

Figure 4. Left-Temperature Profiles in a Solar Shell-and-Tube Solar Receiver. The target conditions for using it as a STDSG are superimposed. Right-Two-phase flow regime in a direct steam generation tube

Preview Presentation:
Presenter(s):
Theodore Wiesner
Once the content has been viewed and you have attested to it, you will be able to download and print a certificate for PDH credits. If you have already viewed this content, please click here to login.