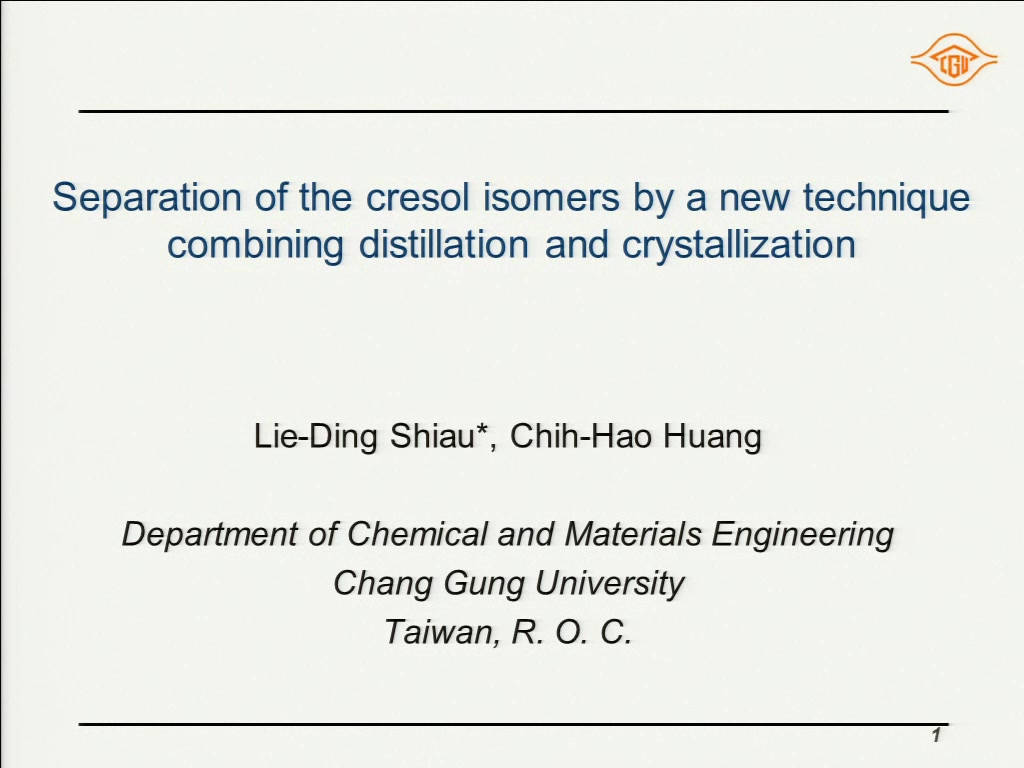 A new separation technology, called stripping crystallization (SC) or distillative freezing (DF), has been recently developed in our laboratory to separate the mixtures with close boiling temperatures, including the mixed xylenes [1-3] and the benzene/cyclohexane mixture [4]. In principle, SC is operated at a triple-point condition, in which the liquid mixture is simultaneously vaporized and crystallized due to the three-phase equilibrium. Thus, SC combines distillation and crystallization to produce pure crystals. Due to the close boiling points of p-cresol (201.98°C) and m-cresol (202.27°C), it is very difficult to separate them by conventional distillation. The experiments show that the SC operation can be applied to purify p-cresol from the cresol isomer while it is rather difficult to purify m-cresol. In the purification of p-cresol by SC, the recovery rate increases with increasing operating pressure while the final purity of the product decreases with increasing operating pressure.

Preview Presentation:
Presenter(s):
Lie-Ding Shiau
Once the content has been viewed and you have attested to it, you will be able to download and print a certificate for PDH credits. If you have already viewed this content, please click here to login.

Influence of Seeds on the Micro-Structure and the Separation Properties of FAU Zeolite Membranes
About half of the total energy at the chemical industries is consumed by separation processes 1 . Membranes are recognized as a potential candidate for an...
Model Based Analysis of Plasticization Behaviour of Polymeric Membranes Used for High Pressure CO2 Separation in Natural Gas Processing
Plasticization resistant property is very important in measuring the performance of polymer membranes for high pressure CO 2 separation from natural gas or...