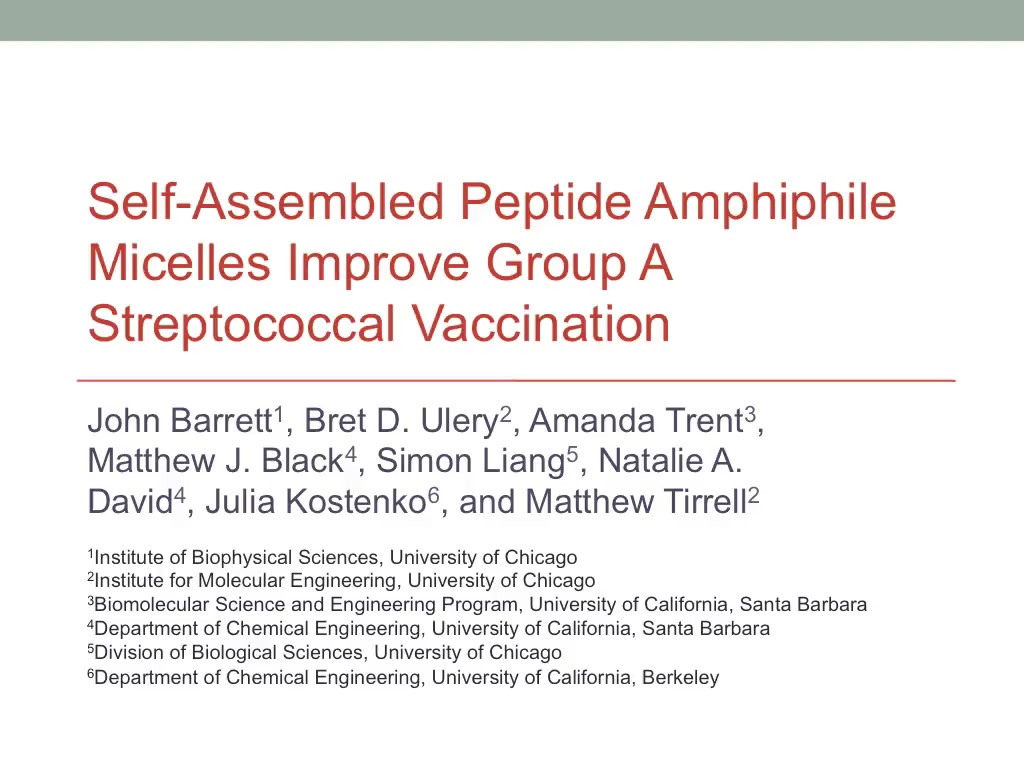 Streptococcus pyogenes(Group A Streptococcus, GAS) is a Gram-positive bacterium restricted to natural growth in humans where it frequently elicits diseases that range in severity from mild infections of the pharyngeal mucosa and dermis to life-threatening invasive infections of connective and muscle tissues leading to necrotizing fasciitis, myonecrosis, and toxic shock. Additionally, post-infection sequelae diseases like acute rheumatic fever and glomerulonephritis arise following localized infections of the nasopharynx and skin, respectively. Epidemiological studies estimate that each year greater than 500,000 worldwide deaths are attributable to GAS infections, placing it among the top ten leading causes of death from infectious pathogens. In the United States alone, more than $600 million is spent annually treating diseases caused by this organism with no effective preventative method established short of prophylactic antibiotic usage.

Vaccines against GAS remain unavailable despite decade’s worth of research and development. Whole-killed and live-attenuated vaccines have been tremendously effective in preventing pathogenic infections, but can be associated with undesirable side effects. Subunit vaccines that deliver just the peptide antigen of interest have been shown capable of stimulating an immune response, but are generally weak immunogens on their own requiring strong adjuvants (non-specific immunostimulants) to be effective. In order to enhance the immunogenicity of peptide vaccines, new delivery systems must be designed. Peptide amphiphiles are unique biomaterials comprised of peptide-lipid conjugates that undergo self-assembly into micelles in water and have been shown capable of delivering biologically active peptides for a variety of applications. Since peptide vaccines are often delivered in low local concentrations, peptide amphiphile micelles provide a novel platform to improve the host immune response to peptide vaccines.

The J8 peptide is a 29 amino acid, conformationally dependent B cell epitope that has been shown to generate an opsonophagocytic, high titer antibody response in mice. J8 was covalently tethered to a di-palmitic acid tail (J8-diC16) and fabricated into peptide amphiphile micelles in water. When delivered to mice subcutaneously, J8-diC16 was found to induce J8-specific high antibody titers greater than soluble J8 delivered with commercially available adjuvants. To further enhance the antibody response, mixed micelles comprised of J8-diC16 and amphiphilic adjuvants were synthesized. Mixed micelles induced a strong immune response after a single vaccination and higher titers than all other formulations regardless of the vaccine regimen. In addition to the J8 peptide, other GAS-associated peptides are currently being investigated with the micelle platform.

Preview Presentation:
Presenter(s):
John C. Barrett
Once the content has been viewed and you have attested to it, you will be able to download and print a certificate for PDH credits. If you have already viewed this content, please click here to login.