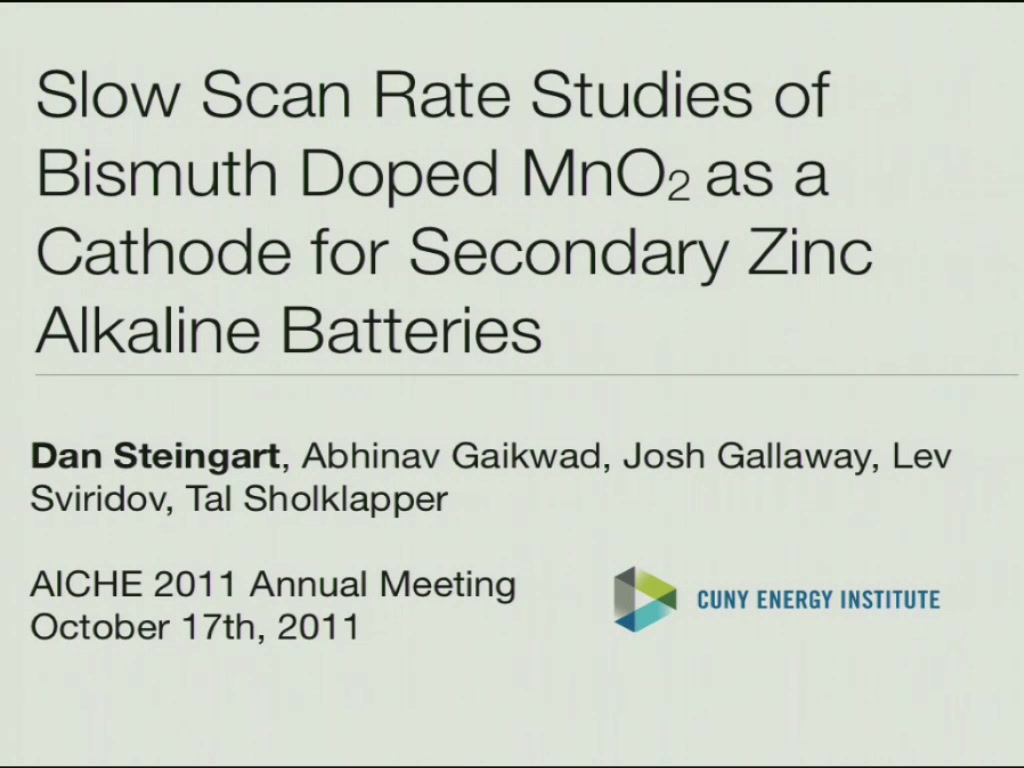 Manganese dioxide (MnO2) is well-established as a primary battery cathode, but irreversibility has generally excluded its use in secondary batteries. Repurposing this chemistry as a rechargeable electrical storage medium make possible a new era of MW-scale advanced batteries to add universal storage capability to the electrical grid. This would be possible due to low cost, high availability, and safety of the materials.

There is no universal consensus on the strategy for extending the cycle life of MnO2 electrodes, which are typically electrolyte-filled porous electrodes also containing carbon and a binder. Adding dopant atoms to the MnO2 crystal structure is one. Another is low depth of discharge. The first of these renders electrochemically irreversible products (Mn2O3) reversible, the second avoids their formation. These methods are not mutually exclusive, and a combination of them may prove successful. In any case, the problem is not only one of manganese electrochemistry, but also current distribution in the electrode and interactions with the conductive carbon matrix.

Any one of many processes may become limiting in a porous MnO2-carbon electrode: ionic conduction in pores, electronic conduction in the carbon matrix, interfacial contacts, or charge transfer of the MnO2 reaction itself. Parallel studies of battery cycling, half-cell cycling, ex situ material characterization, and failure analysis must be used to identify the limiting processes in such porous electrodes.1,2

For this study, porous manganese dioxide cathodes were paired with non-limiting cadmium anodes with a base cell size of ~4 Ah. The electrolyte was quiescent 12 M KOH. Electrochemical impedance spectroscopy (EIS) revealed a steady increase in cell impedance with cycle number, although battery failure was relatively sudden, usually after 100-200 cycles. The EIS results were modeled to pinpoint which phenomena in the porous electrode were responsible for increase in overall impedance.3,4 Ex situ methods such as XRD were used to track material changes in the electrodes.

Recent battery efforts at the CUNY Energy Institute have incorporated parallel experimentation across many cell sizes, with the target being large cell stacks.5

The authors would like to thank The Wallis Foundation and ARPA-E under award number DE-AR0000150 for generous support.

Preview Presentation:
Presenter(s):
Joshua Gallaway
Once the content has been viewed and you have attested to it, you will be able to download and print a certificate for PDH credits. If you have already viewed this content, please click here to login.