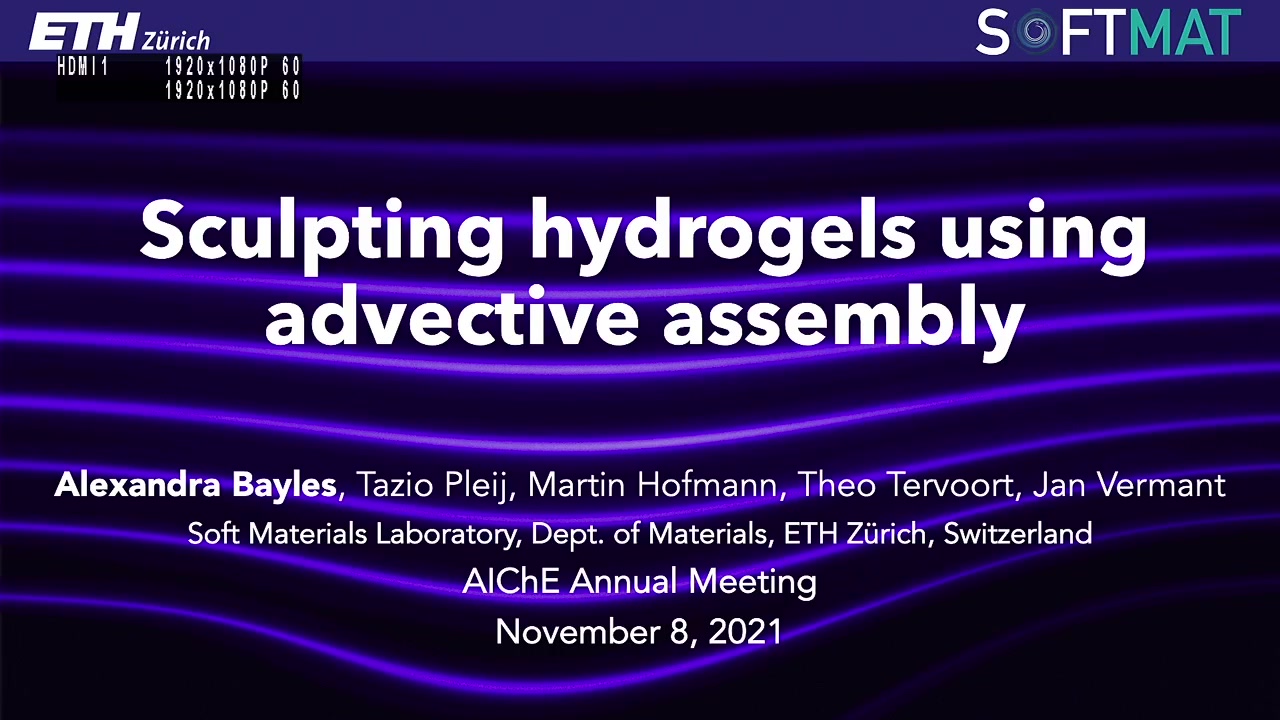 Polymeric hydrogels, water-laden 3D crosslinked networks, find broad application as advanced biomaterials and functional materials due to their biocompatibility, stimuli responsiveness, and affordability. In these materials, the crosslinking density reports critical material properties such as elasticity, permeability, transparency, and swelling propensity, but can be challenging to alter across the sample volume polymerized. Here, we report a novel processing scheme that uses laminar flow to direct the organization of hydrogel crosslinking density across a single sample. Inspired by techniques used to structure polymeric melts, we design custom millifluidic devices that force disparate streams through serpentine splitting, rotation, and recombination elements. These elements multiply the incoming 2D macromer concentration field across the cross-sectional area while preserving its relative spacing and orientation. Serial repetition of elements compounds multiplication, allowing the heterogeneous distribution to be efficiently shrunk before it is dissipated by diffusive mixing. These so-called â€˜advective assemblersâ€™ are well-suited to assemble fluid streams parallel and perpendicular to one another, ultimately enabling the extrusion of hydrogel precursors with laminated and dendritic concentration distributions. Photopolymerization of the sculpted precursor secures the distribution in place, resulting in gel filaments with heterogenous distributions.

As an example of the potential applications this technology may serve, we use advective assembly to fabricate poly(ethylene glycol) diacrylate hydrogel actuators. Gel precursors of different polymer compositions are first blended with a poly(acrylic acid) microgel dispersion, which serves as a yield stress carrier fluid that promotes plug flow and preserves the fidelity of patterned concentration maps. After polymerization, the distribution of crosslinking density (tens of microns) causes gel filaments to swell differentially when immersed in aqueous environments, giving rise to shape changes that persist over tens of centimeters. Actuation is predictively programed by changing the concentration density map through simple adjustment of the relative flow rates of incoming streams. Inclusion of comb-like flow elements promote a high degree of interfacial adhesion, and ultimately creates filaments that are robust to high deformation strains. Combining this novel processing method with traditional 3D printing allows for the fabrication of hierarchical actuators. The unique structures achieved, and the geometrically dictated chemistry-agnostic operating principles used to achieve them, provide a new means to engineer hydrogels to suit a variety of applications.

Preview Presentation:
Presenter(s):
Alexandra V. Bayles
Martin Hofmann
Tazio Pleij
Jan Vermant
Once the content has been viewed and you have attested to it, you will be able to download and print a certificate for PDH credits. If you have already viewed this content, please click here to login.