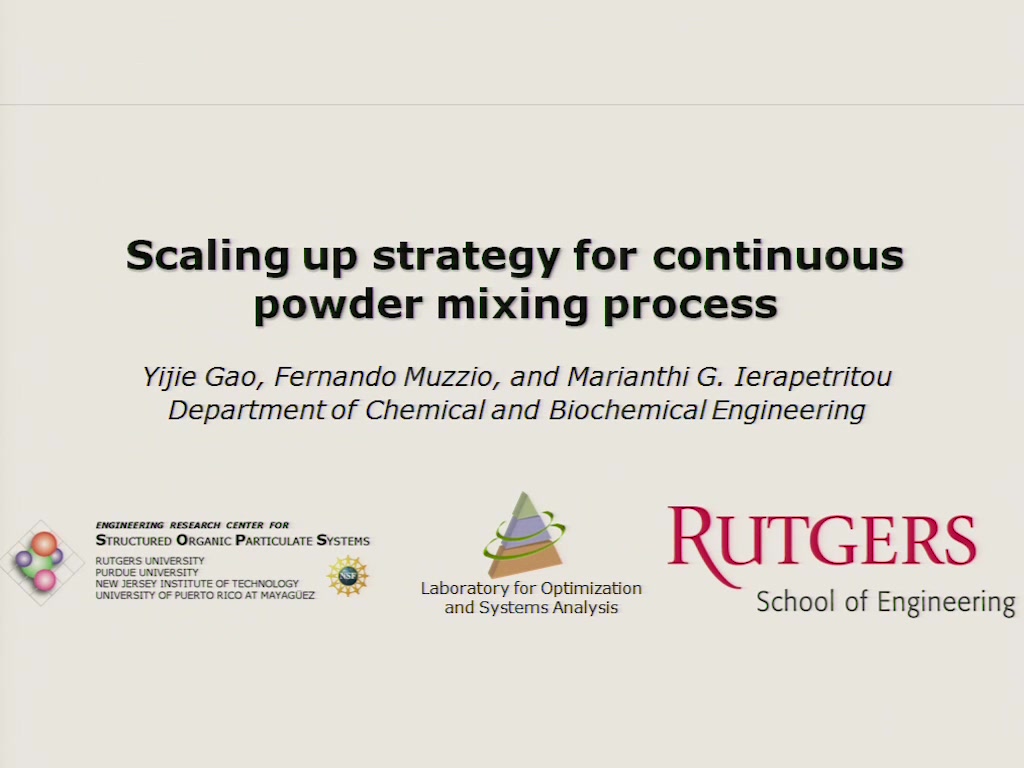 Continuous powder mixing has attracted a lot of interest among pharmaceutical industry. Based on the principle of similarity proposed by Johnstone and Thring 1, many works have been done recently that target the scale-up of continuous powder mixing. In this work, a quantitative scale-up strategy is described that allows the transition from lab to industrial scale. By using the periodic section modeling developed in our previous study 2, scale-up of the cross-sectional mixing and scale-up of the axial mixing are separately considered. To capture the cross-sectional mixing component, the conception of variance spectrum is used. The Lomb-Scargle Periodogram technique widely applied in astronomical studies has been introduced to estimate the variance spectrum of unevenly distributed samples in powder mixing process. The effect of constant sample size on mixing performance of different scales is thus elucidated. To capture the axial mixing component, the residence time distribution is used to characterize mixing of different scales.

Two case studies are presented to illustrate the applicability of the developed strategy. For non-segregating mixing case, similar scale-up characteristics are observed for both cross-sectional and axial mixing. While satisfying the principle of similarity leads to similar decay contours of variance spectrum, a sampling size much smaller than scales of both mixers should be used to achieve similar measurements of mixing performance. A 2.5 power increase of flux rate is generally obtainable in the scale-up of non-segregating materials. However, in processes where cohesive materials are used, segregation occurs due to a tendency of agglomeration, and a larger increase of flow rate is observed. This results from the effect of cohesion on axial motion especially when the scale of mixing process is small. Our method can be used to provide specific guidance of scale-up of different powder mixing cases.

Preview Presentation:
Presenter(s):
Yijie Gao
Once the content has been viewed and you have attested to it, you will be able to download and print a certificate for PDH credits. If you have already viewed this content, please click here to login.

Application of QbD Principles to Analytical Methods
The same QbD Principles applied to the design of manufacturing processes are applicable to the design of analytical methodology. QbD elements such as...
Enhanced Xylitol Production Through Simultaneous Co-Consumption of Cellobiose and Xylose by An Engineered Saccharomyces Cerevisiae Strain
Xylitol is a five-carbon sugar alcohol and has been used as a sugar substitute in the food industry because of its low caloric and anti-carcinogenic...