Ruthenium-Catalyzed Hydrogenation of Levulinic Acid: Influence of the Support On Selectivity and Stability | AIChE
Skip to main content

Ruthenium-Catalyzed Hydrogenation of Levulinic Acid: Influence of the Support On Selectivity and Stability 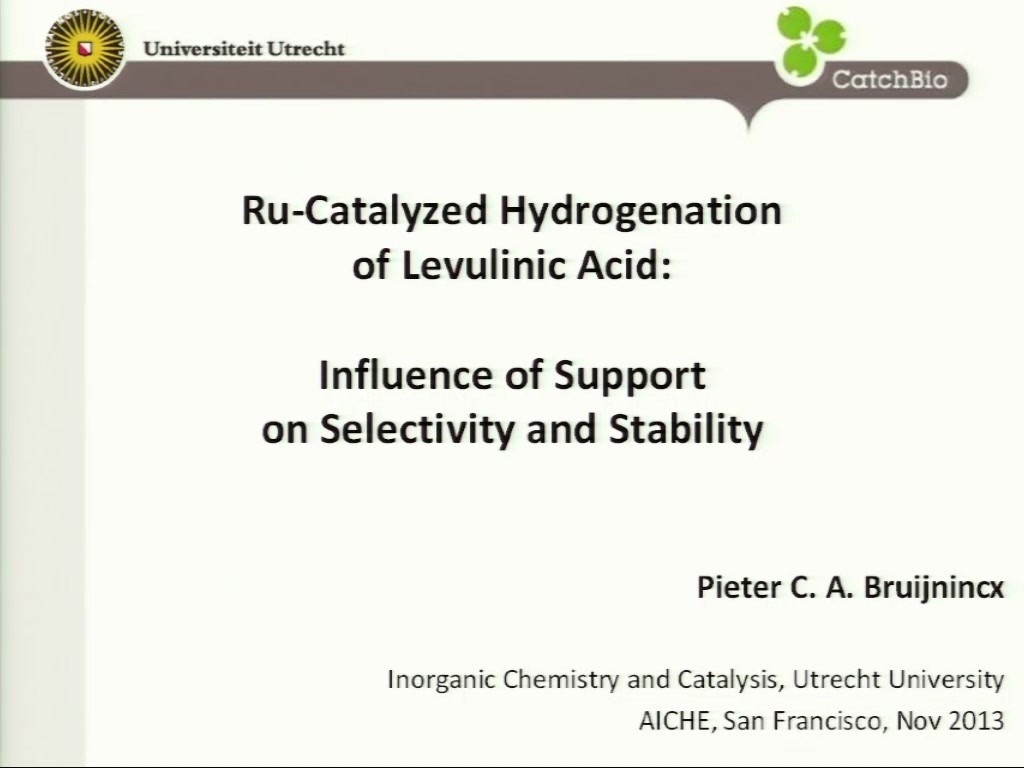 Ruthenium-Catalyzed Hydrogenation of Levulinic acid: Influence of the Support on Selectivity and Stability

Levulinic acid (LA) has been identified as a promising, renewable platform molecule that can be converted by catalytic hydrogenation/deoxygenation to other valuable chemicals, such as γ-valerolactone (GVL), methyltetrahydrofuran (MTHF), pentanoic acid (PA) or its esters (PE) [1,2]. Here, we present our results on the influence of supports of varying acidity on the selectivity and stability of Ru catalysts in the hydrogenation of LA under increasingly harsh conditions in three solvents (dioxane, the LA mimic 2-ethylhexanoic acid (EHA), and neat  LA) [3].

Large differences in activity and selectivity are observed with the different catalysts (Figure 1). Notably, the zeolite-supported Ru-catalysts are the first examples of catalysts for the direct, one-pot conversion of LA to pentanoic acid (PA) and its derivatives (max. yield 45.8 % in dioxane) at this fairly low temperature. The acid sites on the support accelerate both the dehydration step from LA to GVL as well as the GVL ring opening, which is the most difficult step on the pathway to PA. Indeed, reactions with the intermediates GVL and pentenoic acid (PEA) in EHA showed that the acid-supported catalysts are capable of catalyzing the further conversion of GVL.

Spent catalysts were extensively studied to assess stability and detect any changes in either the metal phase or the support. The Ru/TiO2 catalyst was highly selective to GVL and proved remarkably stable, even under the most severe condition (i.e. in neat LA). Gradual deactivation of the zeolite-supported catalysts was observed in EHA and neat LA. Coke build-up resulted in a decrease in surface area and pore volume for the niobia- and zeolite-supported catalyst, but not for the titania-supported one. TGA measurements showed that carbon build-up to decrease in the order H-ZSM5 > H-Beta > Nb2O5 > TiO2 and that angelicalactone is involved in coke formation. Remarkably, coke build-up on the Ru/HZSM-5 catalyst preferentially occurred only in the zigzag channels, as evidenced by systematic shifts in the XRD patterns. While limited leaching and sintering of ruthenium does occur after long runs under severe conditions, dealumination is considered to be the main reason for deactivation, as demonstrated by pyridine IR studies and 2D 27Al MQ MAS NMR (Figure 2).

The obtained results provide further insight into the required properties for selective levulinic acid hydrogenation and show that Ru catalysts on strongly acidic supports are capable of the direct conversion of levulinic acid to pentanoic acid. The insights obtained in the catalyst deactivation mechanisms can be used for further improvement of these first promising examples.

Preview Presentation:
Presenter(s):
Pieter C. A. Bruijnincx
Once the content has been viewed and you have attested to it, you will be able to download and print a certificate for PDH credits. If you have already viewed this content, please click here to login.

Evaluation of Ascorbic Acid and Acetic Acid As Catalysts in the Transesterfication of Virgin Soybean Oil
Biologically derived acids such as ascorbic acid and acetic acid may be used to catalyze the production of biodiesel in a supercritical fluid solvent. The use...
Aqueous-Phase Fischer-Tropsch Synthesis by Using Ruthenium Nanoparticle Catalyst
Fischer-Tropsch synthesis has long been known as an alternative process to produce long-chain hydrocarbons for their use in transportation fuels. In the...