The Role and Value of Disruptive CCS Technologies for Electricity Systems 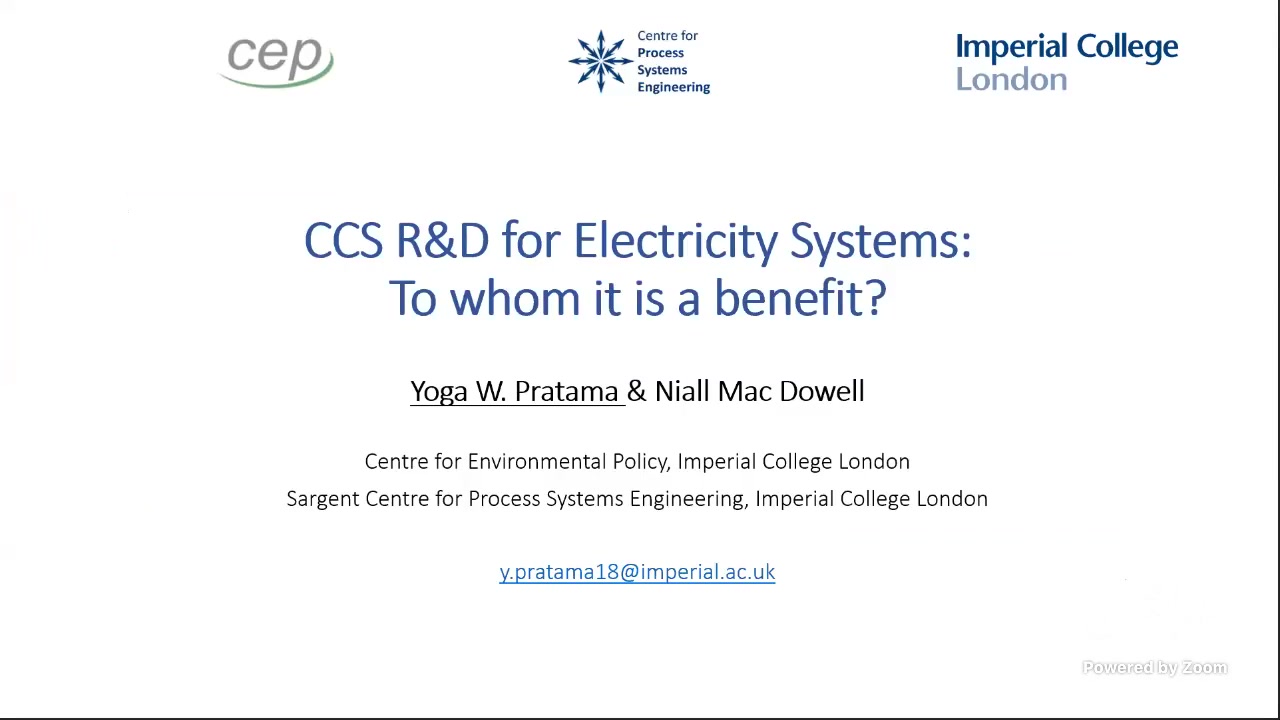 It has been recognized that carbon capture and sequestration (CCS) is a key technology in energy systems decarbonization, including in the electricity system. However, despite the readiness of conventional CCGT with post-combustion CCS (CCGT-PostCCS), the incumbent technology is constantly perceived as a â€œpre-commercial technologyâ€. Consequently, instead of focusing on the deployment of the technology, many proposed projects were frequently delayed, and the current â€œactionâ€ is mainly waiting for the appearance of a unicorn technology, i.e., a very efficient and flexible, yet cheap technology. While the appearance of such technology is highly uncertain and rare, deep decarbonization of the electricity system is critical to mitigating climate change. While various studies have shown that decarbonization without CCS will be less likely or very costly, the relative value of the unicorn technology compared to the incumbent is rarely investigated. Accordingly, the objective of this research is to quantify the role and value of such a disruptive technology for the electricity system.

In this study, we used Electricity System Optimization (ESO) framework to understand how the unicorn features might affect the electricity system transition from 2020 to 2050. ESO is an MILP unit commitment model for electricity systems capacity expansion planning to minimize the total system cost considering system-wide and technology-wise constraints. To quantify the role and value of the unicorn in the electricity system, numerous combinations of technology cost, thermal efficiency, and flexibility (i.e., minimum stable generation) are implemented in ESO. Moreover, to understand the impact of different characteristics a system may have, we include the UK, Poland, and ERCOT and PacifiCorp East (PACE) systems in the USA as cases.

The effect of natural gas prices on the significance of efficiency improvement is observed to be even stronger in Poland than that in the UK as the price of natural gas in Poland is more expensive. As the result, although the capital cost is around 6000 Â£/kW, a 60% efficient unicorn remains competitive in the system. These results suggest that systems with expensive natural gas prices, such as UK and Poland, should prioritize efficiency improvement.

Unsurprisingly, owing to the cheap natural gas price in ERCOT, the impact of efficiency on unicorn competitiveness against the incumbent CCGT-CCS is observed to be weak whilst the impact of capital cost reduction remains strong. However, whilst the magnitude of efficiency improvement impact is dictated by the price of natural gas, we found that load profile and the quality of renewable sources also play an important role. In PACE system, for instance, efficiency improvement in unicorn not only increases the share of the unicorn in total CCS capacity but also significantly increases the capacity and capacity factor of CCS in the system owing to the combination of flat load profile, poor renewable sources quality, and cheap natural gas in the system.

Without unicorn technology, CCS capacity in 2050 ranges from 5 â€“ 15 % of peak load for the UK, ERCOT, and Poland and up to 38% in PACE. A minor cost or efficiency improvement, however, can significantly increase the optimal capacity of CCS from such a range to 20 - 57 % of peak load in all cases. Moreover, such an improvement can also increase the capacity factor of CCS by 2000 full load hours in all cases.

From the system perspective, the value of each improvement, i.e., its ability to reduce the total system cost, depends on other improvements. For instance, although a 60% efficient unicorn can be materialized, the improvement doesnâ€™t have value if the capital cost is too expensive (i.e., more than Â£ 2000/kW for ERCOT, Â£ 4000/kW for UK and PACE, and Â£ 6000/kW for Poland). Similarly, even if the capital cost is very low, the technology is less valuable if the efficiency drops, particularly for cases with expensive natural gas such as Poland. This is because the combination of capital cost, efficiency, and flexibility on a technology dictate the level of optimal deployment of the technology in the system which, in turn, proportionally determines the value the technology can provide to the system. Although technology improvements are undoubtedly beneficial for the technology competitiveness, we found that any technical improvement of a unicorn can only decrease the total system cost by between 2 â€“ 4 % of the initial cost in UK, Poland, ERCOT, and up to 8% on PACE.

Finally, we conclude that Incumbent CCS technology is already cheap and efficient and thus cost-competitive to be deployed in the system. Accordingly, improving the technology slightly may significantly improve the competitiveness of the technology and increase its level of deployment in the system. Interestingly, in some cases, no improvement is needed to increase the total capacity of CCS. This indicates that quick deployment can be equally or even more important than chasing the unicorn. However, it is important to note that while such improvements can be extremely valuable from the technology point of view, the value it can offer to the system tends to be negligible in all cases.

Preview Presentation:
Presenter(s):
Niall Mac Dowell
Yoga Wienda Pratama
Once the content has been viewed and you have attested to it, you will be able to download and print a certificate for PDH credits. If you have already viewed this content, please click here to login.

Computational Tools to Accelerate the Development of Carbon Capture Technology
The U.S. Department of Energy’s Carbon Capture Simulation Initiative (CCSI) was initiated in 2010 to develop and deploy state-of-the-art computational modeling...
Options for Carbon Capture from Refineries / Chemical Sites Smr
IPCCâs special report on the impact of 1.5C warming which concludes that âearly scale-up of industry CCS is essential to...