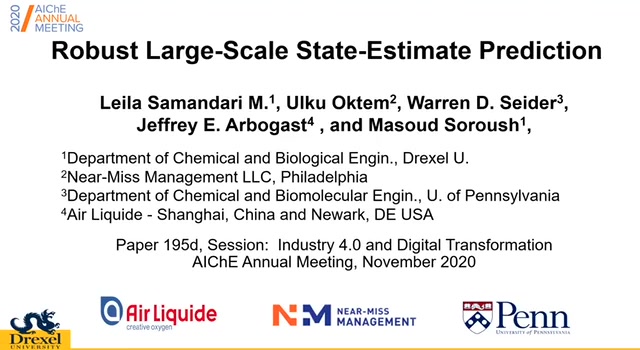 Effective monitoring and control of a process require online measurements of all state variables of the process. Measurement of all state variables are typically not available due to the lack of reliable online sensors and/or high costs of online sensors. These unmeasured variables are often directly related to product properties, which are important to monitor and control. Their estimates are usually obtained using state estimators. As a result of the need for and the importance of state estimation, the development of accurate state estimators that are robust with respect to model uncertainties and unmeasured inputs, has been the subject of research for decades [1-5]. There have been a few reports on the design of large-scale state estimators [6-11]. Although the implementation of centralized estimators for large-scale systems seems to be an optimal approach, these estimators are not scaleable to complex, large-scale systems, as they suffer from the curse of dimensionality.

Preview Presentation:
Presenter(s):
Jeffrey E. Arbogast
Leila Samandari Masooleh
Ulku Oktem
Warren D. Seider
Masoud Soroush
Once the content has been viewed and you have attested to it, you will be able to download and print a certificate for PDH credits. If you have already viewed this content, please click here to login.