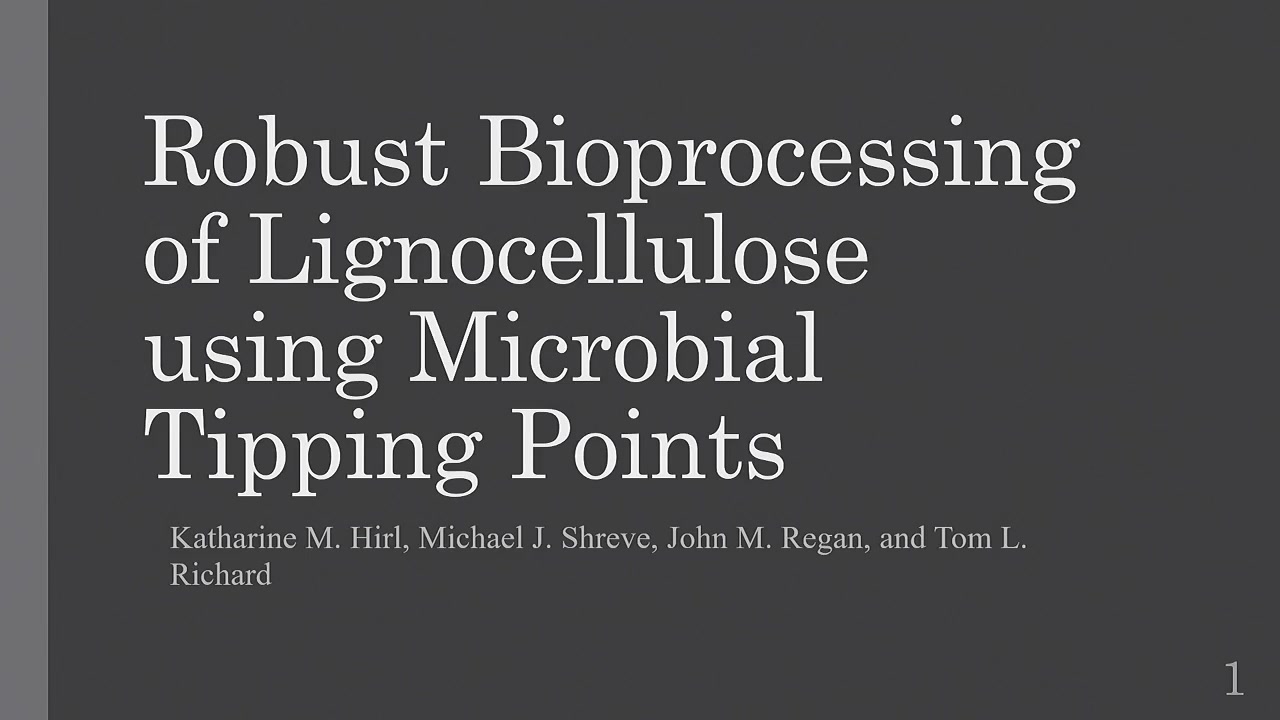 Biofuels derived from lignocellulosic feedstocks have been shown to have near zero and in some cases net negative greenhouse gas emissions, driving public and private interest in producing lignocellulosic biofuels on an industrial scale. Anaerobic digestion (AD) is an established and scalable biological process for biogas production from a variety of feedstocks, including lignocellulosic biomass. AD uses a mixed microbial community adapted to the feedstock and operating conditions to produce biogas in four basic steps, hydrolysis, acidogenesis, acetogenesis, and methanogenesis. Biogas is on average 60 vol% methane and 40 vol% carbon dioxide and can be upgraded to renewable natural gas (RNG) by downstream carbon dioxide removal.

Lignocellulosic feedstocks are recalcitrant to hydrolysis, which is often the rate-limiting step for AD of this material. For other feedstocks, e.g. wastewater sludge, food waste, or manure, the rate-limiting step is considered to be methanogenesis. Because of this difference, the process conditions required for microbiomes to achieve high methane production rates during AD of lignocellulosic feedstock may have unique pH, temperature, residence time, and loading rate optima and tolerances. Hydrolysis-limited microbiomes may also have different sensitivities to perturbations of these conditions compared to more prevalent wastewater and manure systems. Understanding the sensitivities of AD to upsets or tipping points is necessary for operating a robust process, with robust defined as being able maintain the key process performance parameters without easily upsetting beyond recovery. A tipping point is defined as the process parameter value at which a biological community becomes unstable in terms of its key product(s) formation. This study proposes a method to define the tipping points for an AD microbiome fed senescent switchgrass. Within those tipping points the variation in process variables avoids irreversible reductions in system performance.

The environmental stresses evaluated in this study are temperature, pH, and overfeeding. These stresses were chosen as those likely to occur during full-scale operation, and that have been known to upset conventional waste digesters. Tipping points will be defined at similar thresholds as those used in inhibitor studies, with tipping points at 50% and 90% decline in methane production after the perturbation is applied. The use of two levels of failure is important as some stresses may not cause catastrophic failure within an operationally relevant range of stress magnitudes. The volatile fatty acid (VFA) concentration will also be monitored as a secondary variable used to identify and characterize a failing digester, as VFAs represent the key intermediates between the potential rate-limiting steps of hydrolysis or methanogenesis. For the pH and temperature tipping point experiments, both positive and negative changes will be evaluated, while for overfeeding only positive changes will be explored. The magnitude of each shock is provided in Table 1. Based on prior AD literature, lower feeding rates are unlikely to result in the dramatic and catastrophic failures that higher feeding rates and both higher and lower pH and temperature conditions can.

Each shock condition will be carried out in duplicate 1-L semi-continuous bioreactors and compared to duplicate controls. The digestate from a pilot scale anaerobic digester fed switchgrass at 55°C, 8.5 pH, and a 10-day retention time will be used to inoculate the 1-L bioreactors. After the shock is administered for a set time the bioreactors will be returned to the process conditions of the pilot reactor and monitored for three retention times for process recovery. Biogas production will be continuously monitored while the VFA concentration, feedstock conversion, and biogas composition are measured at 0.01, 0.1, 0.5, 1, 2, and 3 retention times.

This work aims to define the range of perturbation that a lignocellulosic AD system can experience without significant and irreversible loss of methane production. The method described allows for the sensitivity of a microbial system to be defined in terms of control variables. This then informs how precisely the system must be controlled to avoid biological tipping points leading to loss of product. Defining these tipping points and controlling within them will increase the operating efficiency of microbial systems and enhance the technical and economic feasibility of converting recalcitrant lignocellulosic feedstocks to biofuels.

Preview Presentation:
Presenter(s):
Katharine Hirl
John M. Regan
Tom L. Richard
Michael J. Shreve
Once the content has been viewed and you have attested to it, you will be able to download and print a certificate for PDH credits. If you have already viewed this content, please click here to login.

The Role of APC in Industry 4.0
The process industry is undergoing a significant transformation that will change the way plants are controlled, operated and maintained. This transformation...
Optimization Methodology of Bog Rate for the LNG Carriers
A new propulsion system, such as Dual Fuel Diesel Engine (DFDE), has replaced the conventional steam propulsion system. Even though Main Engine Gas Injection (...