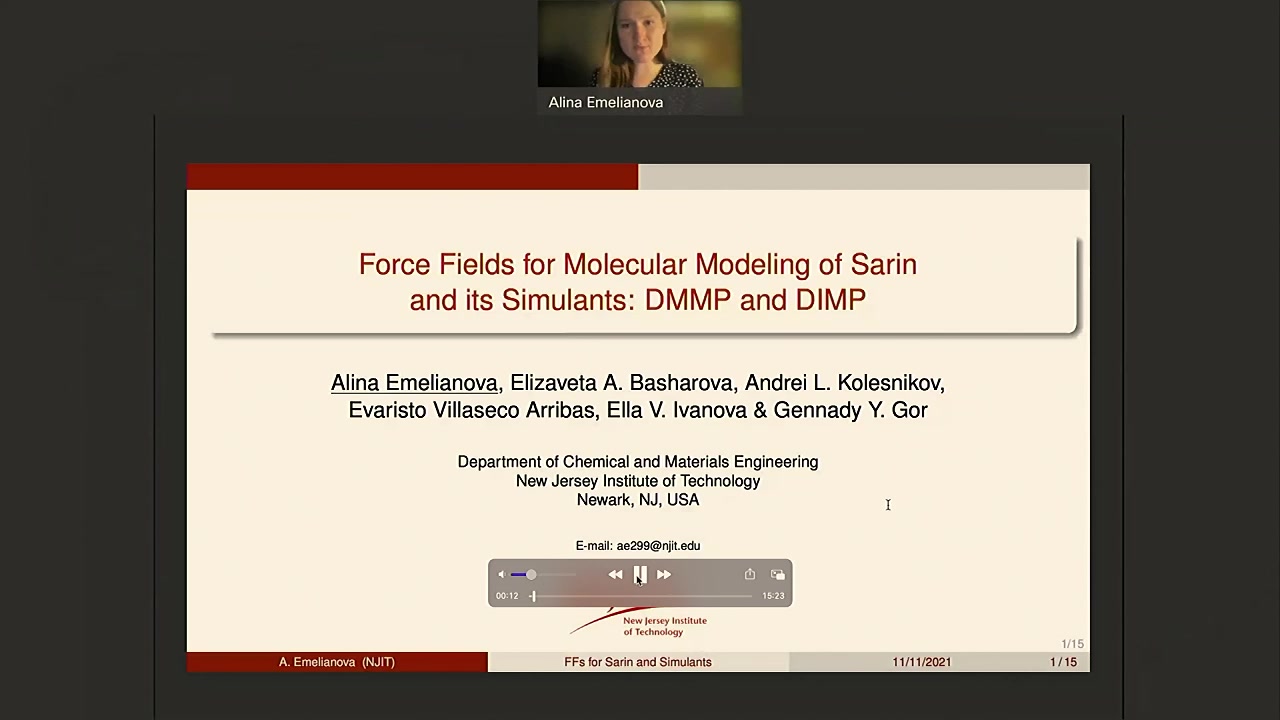 Even three decades after signing the Chemical Weapons Convention, organophosphorus chemical warfare agents (CWAs), such as sarin, remain a threat. There is therefore a critical need to develop novel methods for detection, protection, and destruction of these chemicals which motivates research on their physicochemical properties. Sarin is a highly toxic chemical compound, therefore an experimental investigation of its properties is usually conducted with simulants. To validate the performance of a simulant, molecular modeling can be employed for a direct comparison of physical-chemical properties of the compounds, such as vapor-liquid equilibrium properties.

The results of classical molecular modeling of sarin and simulants and their agreement with experimental data rely on force fields. In recent years there have been several force fields proposed for sarin and its most common simulant dimethyl methylphosphonate (DMMP). However, other simulants frequently used in experiments received less attention from the molecular simulation perspective, e.g. to date, there has not been any force field and no simulation data for diisopropyl methylphosphonate (DIMP).

We compare the literature force fields for sarin and DMMP, focusing specifically on the vapor-liquid equilibrium for the pure species. We performed Monte Carlo and molecular dynamics simulations for the calculation of liquid densities and vapor pressures developing the entire binodal curves. The TraPPE force field was shown to outperform other force fields. Therefore, it was extended to the DIMP molecule and employed for the calculation of its phase equilibrium properties. We demonstrated the ability of the TraPPE force field to give excellent predictions of the experimental equilibrium liquid densities and vapor pressures of DIMP in a wide range of temperatures. Moreover, since the critical points of sarin and the simulants have not been measured experimentally (they decompose at temperatures lower than critical), the simulation results were in particular use for estimation of the critical parameters of the compounds for further usage with the Peng-Robinson equation of state [1]. The results are expected to find applications in simulations of phase behavior of mixtures containing sarin or its simulants, and studies of adsorption of these species.

Preview Presentation:
Presenter(s):
Evaristo Villaseco Arribas
Elizaveta Basharova
Alina Emelianova
Gennady Gor
Ella Ivanova
Andrei Kolesnikov
Once the content has been viewed and you have attested to it, you will be able to download and print a certificate for PDH credits. If you have already viewed this content, please click here to login.

At Least 1,000X Thinner than a Human Hair
The last century witnessed the development of two classes of materials—polymers and semiconductors—that dramatically changed people’s lives. A new class of...
Advances in Isomar™ Technology - Key to Enhanced PX Profitability
The robust worldwide growth of synthetic fibers, resins and films has created significant needs for improved technologies for the production of high purity p-...