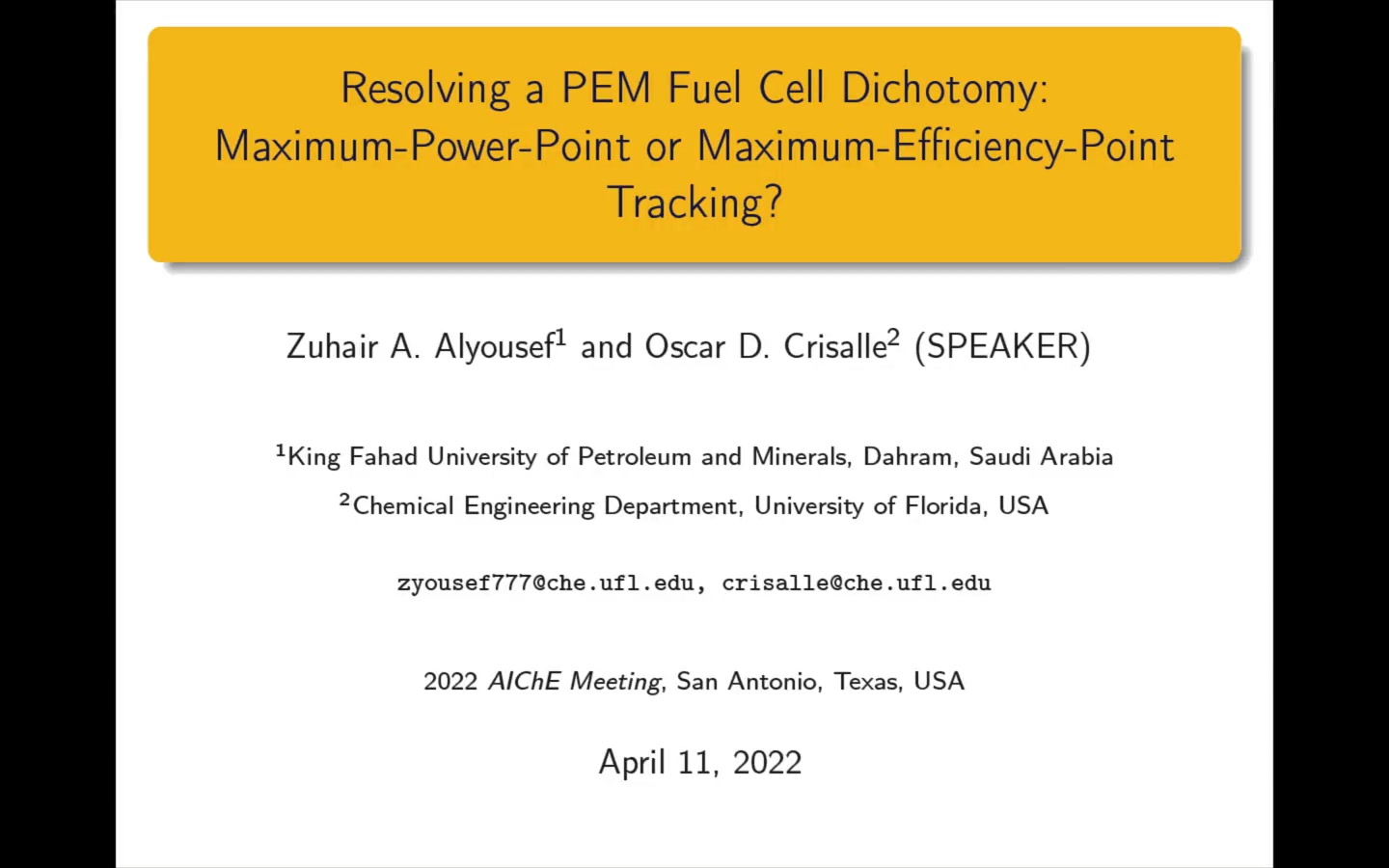 It is critically important to manage the electrical power production fuel cells in a fashion that satisfies in real time the power demands of a connected load. Therefore, an effective and safe control strategy for specifying adequate operational regimes is necessary for the dual purposes of load tracking and prevention of catastrophic operational failures in the form of device shutdown or hardware degradation. The scope of this work includes all types of proton-exchange membrane fuel cells (PEMFC), and includes references as means of examples to direct-methanol fuel cells (DMFC), a field of significant expertise of the authors.

Two process control methodologies are gaining increasing attention in the context of PEMFC theoretical studies and industrial practice. One is the Maximum-Power-Point Tracking (MPPT) control method, which seeks to adjust the deviceâ€™s manipulated variables, typically the electrical current and/or voltage, to values that produce the maximum possible power at the desired operating temperature. The alternative is the Maximum-Efficiency-Point Tracking (MEPT) philosophy, which adjusts the manipulated variables to bring the system to an operating point where a suitable device efficiency metric is maximized. The literature on both techniques is still in an emergent phase, though much less documentation is available for the MEPT approach. The control practitioner is left without much guidance when it comes to selecting between these two competing methodologies, as no comprehensive comparison/contrast studies are available. This work contributes to the eradication of this technological gap.

Poor control in a fuel cell may bring the system to catastrophic operational regimes. For example, cathode pores can become flooded with water produced at high rates when the electrical current drawn from the device is high. Oxygen feeds then encounter a very high transport resistance in their path towards the catalyst surface of the electrode, effectively starving the device of oxidant. The electrochemical reaction then ceases, leading to a shutdown of power production.

It is possible to induce deleterious dry-out condition in the pores of the fuel-cell layers when the operating temperature is so high that water vapor is discharged from the system at a rate higher than it is generated at the cathode. Device shutdown is again a concern because the presence of liquid water in the cathode is necessary to sustain the electrochemical reaction.

Poor control may also produce several other adverse consequences, such as inability to satisfy the load requirement, permanent degradation of catalyst particles, enhancement of the undesirable cross-over effect where fuel traverses the fuel-cell membrane to react at the cathode side without producing useful electricity, and the diminution of specific performance metrics such as fuel-to-electricity conversion efficiency.

The MPPT and MEPT optimization methods have established track records in other fields, particularly in the control of photovoltaic devices. Their translation to fuel-cell devices has been met with enthusiasm, unhampered by the challenge that requisite dynamic process models for PEMFCs are not always readily available. Creative solutions have come to the rescue. Look-up tables of operational optima, real-time probing for power peaks by locally sweeping the current over a small range at constant voltage, and using parameter estimation methods, among other techniques, have been explored in the literature. Although the full efficacy of either method has not yet been conclusively demonstrated, it is nevertheless possible to claim at this time that the MPPT and MEPT methods (i) hold significant promise for leading to improved fuel cell performance, and (ii) are practically realizable.

Hence, if MPPT or MEPT is to be adopted for the purpose of advancing the state of the art, which one is the most appropriate choice for robust and safe PEMFC process control operations? This paper seeks to produce specific answers to this dichotomy using quantitative arguments and advances the recommendation that MEPT is the most promising option.

This work is based on a review the MPPT and MEPT literature records for PEM fuel cells, as well as the authorsâ€™ theoretical analysis and experience with DMFC devices they fabricated, optimized, tested, simulated and documented in the literature as part of a multi-disciplinary multi-university team of collaborators. The literature is missing a comparison-and-contrast analysis of MPPT and MEPT, and this paper seeks to fill that gap for the benefit of PEM fuel-cell practitioners.

We advocate the use of quantifiable device performance metrics as the basis for comparison and contrast studies. The primary intent is to develop quantitatively justified conclusions, and a secondary goal is to propose a systematic analysis framework that can be replicated by practitioners interested in carrying out meaningful comparative analysis work. The approach is based on available data, including characteristic PEMFC polarization curves and experimentally validated simulation studies on DMFCs.

The authors will present and defend justifications for each element in the lists of advantages and disadvantages of MPPT and MEPT advanced in this section.

I. Analysis of MPPT Control

We argue that MPPT enjoys the following advantages:

b. All measurements needed for implementation of the maximization algorithm are readily available.

We argue that MPPT suffers from the following disadvantages:

1. Optimal operation is realized by electrical currents that are very close to the limiting current, where a precipitous fall to zero current is experienced by the isothermal polarization curves, causing a sudden and irreversible power failure. Slight current perturbations away from the maximum-power operating point can therefore cause unsafe process shutdowns.

2. The optimal operation regimes incur significant losses in voltage efficiency because the maximum-power points are located very close to limiting current values where voltage drops are very steep in slope and large in magnitude.

3. Poor quality of electrical work is realized as a consequence of the drop in voltage efficiency.

4. The maximum-power operating points are inevitably realized at very high currents for any given operational isotherm, which promotes water flooding in the cathode-layer pores thus possibly leading to a catastrophic shut down of the device by oxidant starvation.

5. Small changes in operating current cause relatively high changes to the maximum-power points, making the technique fragile to perturbations.

Several fuel-cell efficiency metrics are available as candidates for maximization, including the real, voltage, and fuel efficiencies of the PEMFC device, whose definitions are well established in the field. The authors advocate that the MEPT algorithm seek to optimize the real efficiency of the fuel cell, because this efficiency is maximized when the largest-possible recovery of useful energy from the fuel is realized.

We argue that MEPT enjoys the following advantages:

a. Operation at maximal real efficiency ensures the desirable outcome that the maximum amount of usable energy is extracted from the fuel.

b. Operation at maximal real efficiency can be maintained even under relatively large current and voltage perturbations away from their optimal values

c. Small changes in operating current cause relatively small changes to the maximum-efficiency value while the maximum remains approximately constant at all temperatures, making the technique robust to perturbations.

We argue that MEPT suffers from the following disadvantages:

1. The efficiency metric being optimized by the MEPT algorithm may not be easily computed from available measurements, as it is required to know or estimate the extent of current crossover caused by the unproductive reaction of fuel at the cathode.

2.The produced output power is lower and confined to a narrow range of values.

3. The output power does not change significantly under relatively large current fluctuations.

The claims established in the previous section imply that the disadvantages of MPPT are significant and are in principle impossible to eradicate because by design the operating points are manipulated to lie dangerously close to the limiting current values that cause device shutdown. As a consequence, small current perturbations can induce catastrophic power failures. Simulation studies for a DMFC device have shown that MPPT drives the device perilously close to failure points because it produces water saturation levels in excess of 90 % inside the pores that transport oxygen to the cathode, interfering with the diffusion process, and eventually leading to power generation shutdowns due to oxidant starvation at the cathode. The MPPT disadvantages obviously outweigh its advantages.

In contrast, this work shows that the MEPT produces operating points that are safely away from the catastrophic limiting-current extremes, hence constituting a more robust control strategy. The method is able to maintain near-optimal performance in the presence of relatively large perturbations away from optimality. DMFC simulation studies show that MEPT leads to highly desirable optimal water saturation levels of 52 % in the cathode pores, optimally mitigating the risk of failure due to cathode flooding or dry-out conditions.

From this viewpoint, MEPT is more robust than MPPT control, and is recommended by the authors as a subject for further development as it holds a very large potential for serving as the better performing of these two alternatives in practical applications.

Preview Presentation:
Presenter(s):
Oscar Crisalle
Once the content has been viewed and you have attested to it, you will be able to download and print a certificate for PDH credits. If you have already viewed this content, please click here to login.