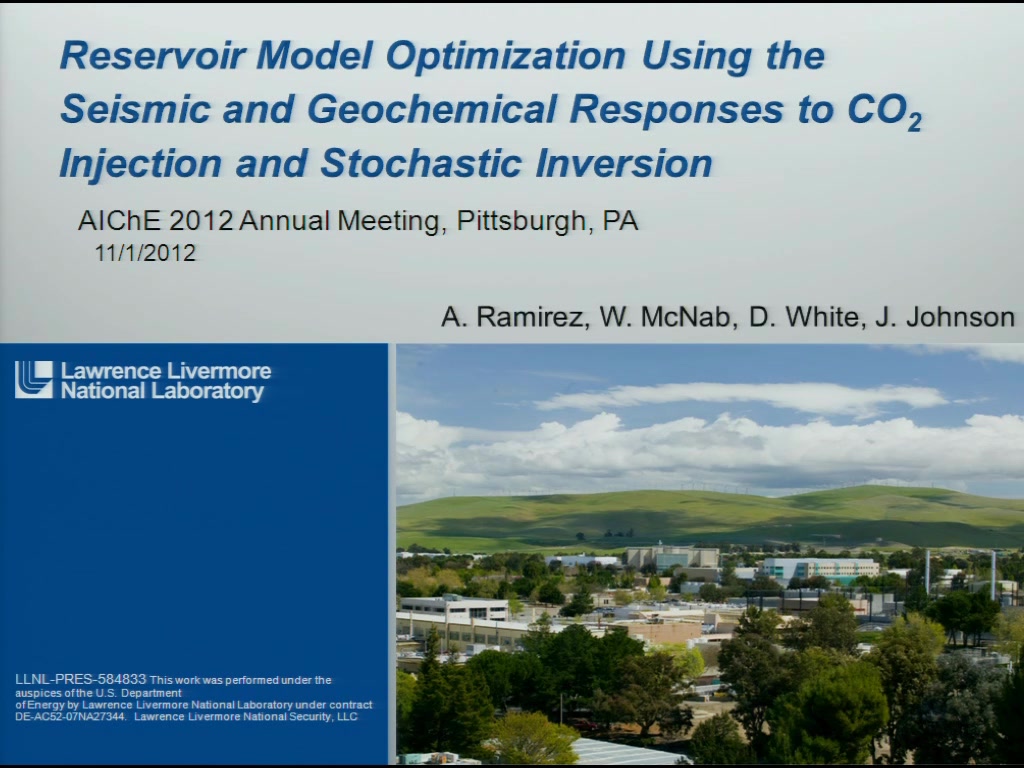 4D reflection seismic data were used to map CO2 migration during Phase 1 of the Weyburn-Midale Project, while an extensive fluid sampling program documented the geochemical evolution triggered by CO2-brine-oil-mineral interactions. Our goal is to use these data to optimize the reservoir model and thereby improve site characterization and dependent predictions of long-term CO2 storage in the Weyburn-Midale reservoir.

Our algorithm starts by proposing one reservoir model realization. Then, using a multi-phase/multi-component flow simulator, we predict reservoir conditions associated with CO2/H2O injection, HC/H2O withdrawal, and CO2 migration. Using these conditions, we predict P-wave velocities as a function of fluid-phase saturations, pressure, and porosity using Gassmann's equation.  The velocity stack is used together with calculated bulk densities to generate an intra-reservoir reflectivity series. These series are convolved with an estimate of the source wavelet to predict time-series waveforms that can be directly compared to observed seismic response. The likelihood for each model is computed and used to decide whether the proposed reservoir model produces acceptable agreement between predicted and observed 4D seismic reflection data. Then, a new reservoir model is proposed and the process is repeated until the process converges. We will present the results from a synthetic data study to illustrate the method's performance.

This work has been performed under the auspices of the U.S. Department of Energy by Lawrence Livermore National Laboratory under Contract DE-AC52-07NA27344.

Preview Presentation:
Presenter(s):
Abelardo Ramirez
Once the content has been viewed and you have attested to it, you will be able to download and print a certificate for PDH credits. If you have already viewed this content, please click here to login.