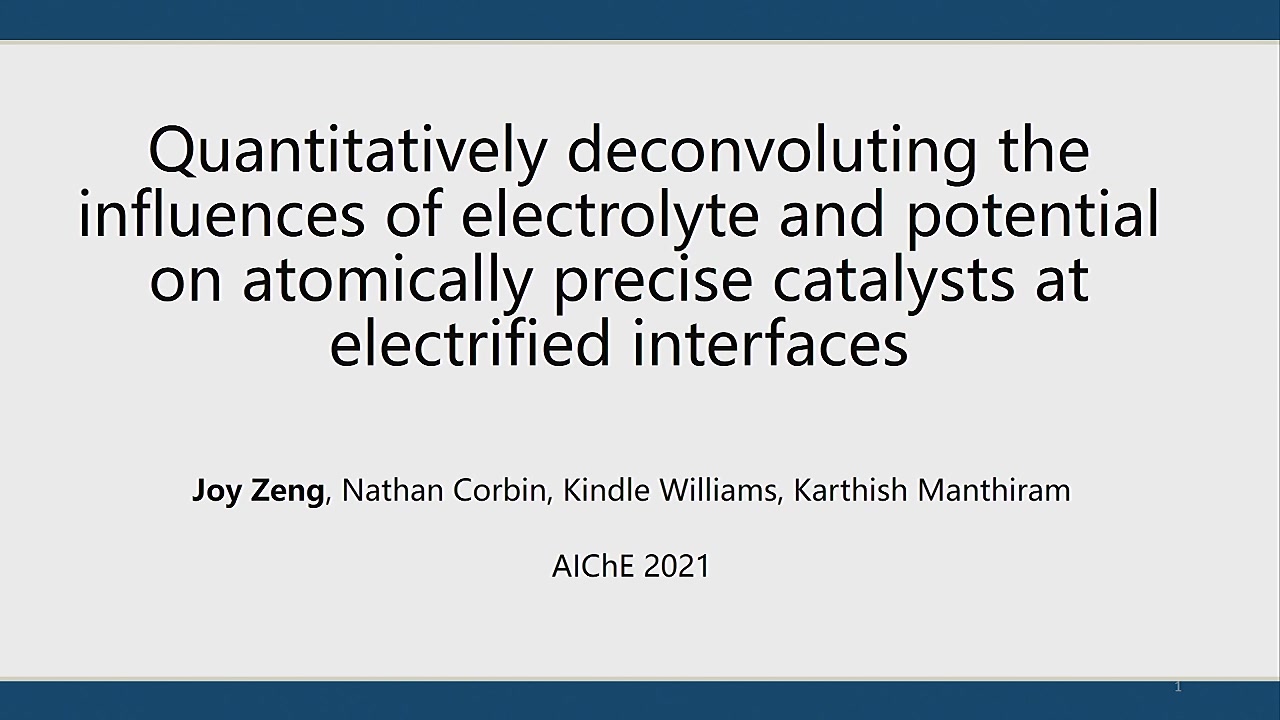 Atomically precise active sites on electrode surfaces promise new chemical transformations that simultaneously exploit both the potent physical handle of applied voltage and the highly-tailored reactivity of well-defined active sites. Often, these catalysts have off-electrode analogs in biology or organometallic chemistry, and effectively leveraging these analogies requires an understanding of how catalysis at the active site is perturbed by the complex interplay of electrolyte species and electric fields at electrode interfaces. In this talk, we will share how cohesive, statistically rigorous kinetic analyses have helped to deconvolute the various roles of electrolyte species and applied potential on atomically precise CO2 reduction and electrochemical hydroformylation catalysts.

First, we investigate the mechanism of carbon dioxide electroreduction (CO2RR) on immobilized cobalt phthalocyanine (CoPc) through collecting kinetic data over a wide range of operating conditions, fitting rate models, and quantitatively comparing candidate mechanisms.[1] The proposed reaction mechanism illuminates unexpected roles of both the electrolyte and applied potential. First, the electrolyte anion, bicarbonate, has multiple roles in the reaction â€“ it is a proton donor, pH buffer, and, unexpectedly, can also poison the catalyst. Second, the nature of electron transfer does not follow one of the mechanisms typically assumed for CO2RR - rather, there is mixed control between concerted and sequential proton-electron transfers, and the relative preference changes depending on reaction conditions.

Second, we investigate the various perturbations of the electrified interface on hydroformylation (HFN) catalysis. HFN is a well-studied thermochemical reaction, typically catalyzed by organometallic catalysts, that appends CO to an olefin in the presence of H2 gas. We mimic homogeneous HFN catalysts on electrode surfaces using single atom-decorated nanoparticles. We show that electrochemistry can be used to circumvent the need to supply H2 as a reactant. Instead, protons, electrons, and CO can be used to hydroformylate a model substrate. We again use quantitative analysis of kinetic data collected over a wide range of operating temperatures, pressures, applied potentials, and reactant concentrations to investigate the reaction mechanism and describe the role of applied potential, and electrolyte species in perturbing organometallic catalysis-inspired chemistry at electrified interfaces.

These studies build towards a more rigorous and quantitative understanding of how the many components of an electrode interface interact with and influence catalysis on atomically precise active sites. It is crucial to carve out this complexity if we wish to effectively import catalysts or design principles from other catalytic contexts onto electrified interfaces.

Preview Presentation:
Presenter(s):
Nathan Corbin
Karthish Manthiram
Kindle Williams
Joy Zeng
Once the content has been viewed and you have attested to it, you will be able to download and print a certificate for PDH credits. If you have already viewed this content, please click here to login.

Unsupervised Machine Learning to Extract the Electronic and Chemical Properties of Alloy and Metal Oxide Surfaces
Catalyst design greatly benefits from the identification of the atomic, chemical, and electronic descriptors that map to catalytic figures of merit (e.g.,...
Reaction Network Analysis of Rhythmic Dynamics in Metabolic and Circadian Models of Cyanobacteria in a Photobioreactor
Reaction network analysis assumes that stoichiometric equations are given for each reaction step together with power law rate expressions. On output,...