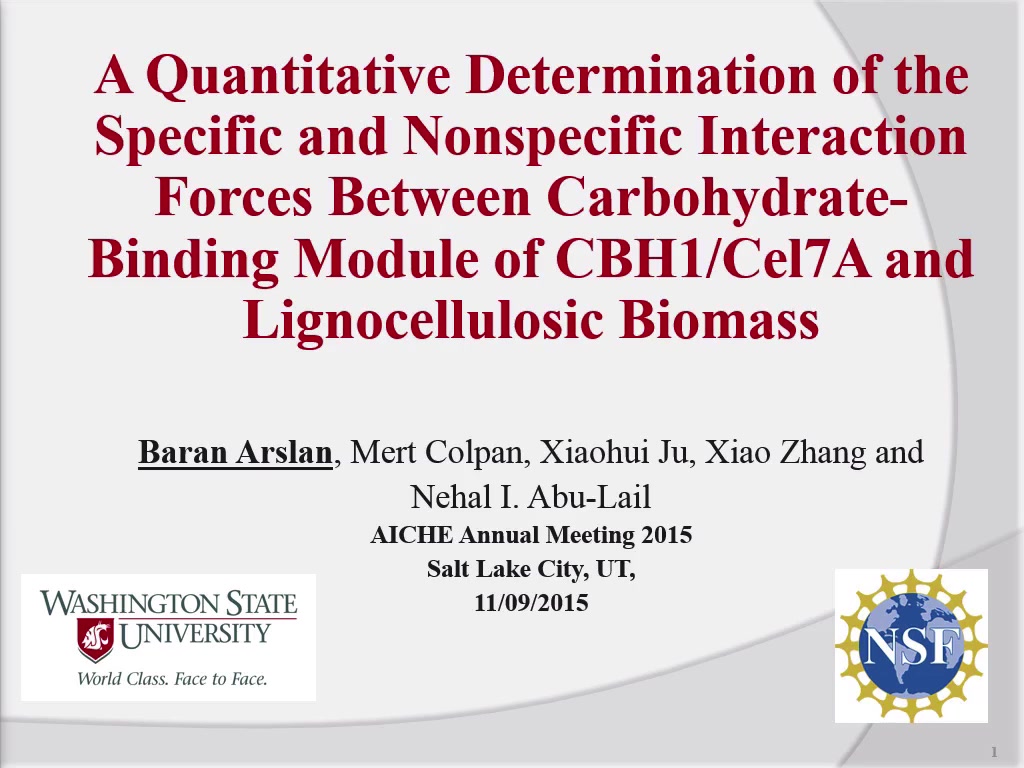 Enzymatic hydrolysis of lignocellulosic biomass has been considered as one of the key steps in the biochemical conversion of cellulosic biomass to sustainable biofuels and biochemicals. One of the major inhibitory mechanisms preventing efficient enzymatic hydrolysis is the nonproductive binding of cellulase to lignin. It has been suggested that cellulases adsorb to lignin and cellulose via hydrophobic, hydrogen bonding and ionic bond interactions. However, the exact mechanism of cellulase binding to cellulose and lignin remain unknown. Thus, elucidating the mechanism behind cellulase adsorption to both cellulose and lignin is required for the development of effective enzymes or pretreatment technologies for biofuel production. To understand the specific effect of lignin on cellulase adsorption, a set of reference substrates derived from kraft, sulfite and organosolv pulping was utilized to identify the types of forces involved in enzymatic interactions with cellulosic materials. The reference substrates used have known surface composition of cellulose and lignin.

Most of fungal cellulases have two modules namely a catalytic domain (CD) module and a carbohydrate-binding module (CBM). It is believed that the CBM plays a role in increasing the concentration of CD on the substrate surface and thus increasing the enzymatic action on the insoluble substrate surface. Therefore, studying direct interaction mechanism between the lignocellulose surface and CBM allows us to elucidate the nonproductive binding component of cellulases to lignin.

Atomic force microscopy (AFM) has the unique ability to quantify interactions between two surfaces at the molecular level and in native environments. We utilized AFM to measure the total forces acting between CBM and reference substrates in buffered medium. By performing adhesion force measurements between CBM and substrate surfaces, the binding affinity of CBM to lignin and cellulose was quantified. In addition, the effect of lignin type on CBM binding affinity was discussed. Poisson statistical analysis model was then applied to the data to decouple the adhesion force into specific and nonspecific components. Based on the quantitative comparison of specific and non-specific forces between CBM and substrate surfaces, the dominant type of forces effective in enzymatic binding to cellulose and lignin were determined.

Modified organosolv, sulfite, and kraft pulping were used to produce reference substrates from poplar. The chemical composition of the reference substrates was analyzed via Technical Association of the Pulp and Paper Industry (TAPPI) test methods (T236, T204, T222, T211, and T249). Surface lignin coverage was characterized by X-ray photoelectron spectroscopy (XPS). Prior to force measurements, fibers of reference lignocellulosic substrates were attached to silicon wafers coated with poly-L-lysine (PLL). AFM cantilevers were functionalized with CBM and interaction forces between substrate surfaces and CBM were collected in 50 mM sodium acetate buffer at pH 4.8 under ambient temperature and humidity. A 5 x 5 μm2 area of substrate surface was scanned at a 1 Hz rate. Spatially collected force-distance retraction curves were processed using the Nanoscope Analysis 1.5 software to determine the number of adhesion events and the magnitudes of adhesion forces measured between CBM and substrates' surfaces. Poisson statistical model was applied to adhesion force data to decouple the total interaction force into specific (hydrogen bonding) and nonspecific (Lifshitz-van der Waals and hydrophobic forces) components.

Our results showed that both hydrogen bonding and hydrophobic interactions contribute to enzymatic binding to lignocellulosic substrate surfaces. As the surface lignin coverage increases on the substrates, the overall adhesion forces of CBM to substrate surface increases in a linear manner (Figure 1). The slope of the linear line for kraft pulped (KP) substrates is 1.5 folds higher than that for the (sulfite pulped) SP substrates. Although we don't have a third point for the organosolv pulped (OP) substrates, based on the behavior of two data points obtained for the OP substrates, the trend observed for the KP and SP substrates is most likely valid for the OP substrates (Figure 1) . This suggests that the effect of kraft lignin on increasing the binding forces of CBM is higher than the effect of lignosulfonates and organosolv lignin on such interactions. Lignin-rich substrates showed higher binding strength to CBM in comparison to lignin-free substrates. This suggests that the affinity of CBM to lignin is higher than cellulose.

Understanding the types of interaction forces that dominate the binding of enzymes to the biomass surface or specific chemical groups will allow protein engineers to design new enzymes that can specifically target cellulose groups in the biomass. In addition, by applying specific pretreatment technologies capable of reducing the hydrophobicity of lignin and reducing the number of chemical groups in lignin structure that are involved in hydrogen bonding, nonspecific binding of cellulase enzyme to lignin can be minimized.

This work is supported by National Science Foundation (NSF), Grant number: 1067012. We gratefully acknowledge Dr. Dmitri Tolkatchev and Prof. Alla Kostyukova from the Gene and Linda Voiland School of Chemical Engineering and Bioengineering at Washington State University, for their valuable help in CBM expression and purification. 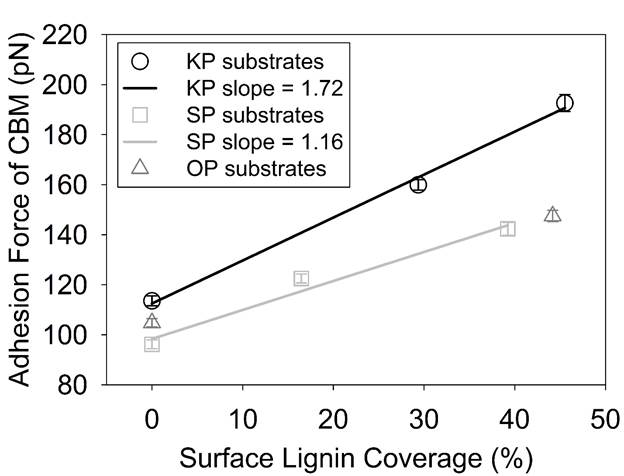 Figure 1. Adhesion forces of CBM to reference substrates as a function of surface lignin coverage. R2 of linear regression lines are 0.99 and 0.97 for KP and SP substrates, respectively. Errors bars indicate the standard error of the mean.

Preview Presentation:
Presenter(s):
Baran Arslan
Once the content has been viewed and you have attested to it, you will be able to download and print a certificate for PDH credits. If you have already viewed this content, please click here to login.