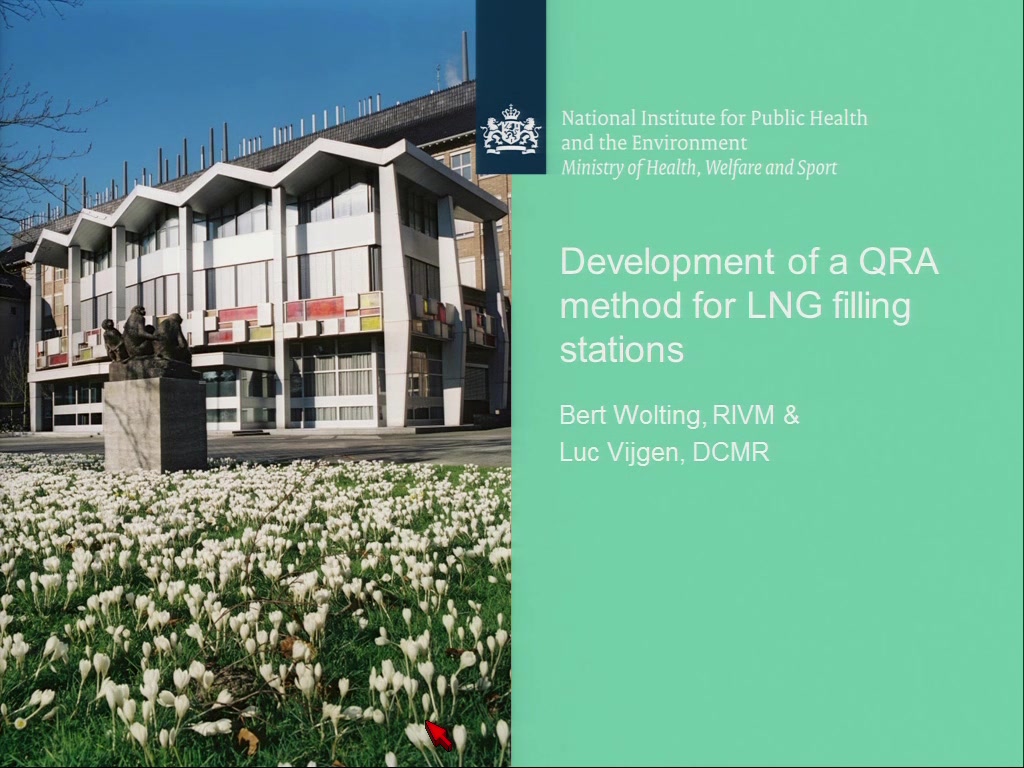 This paper describes a method to calculate risks generated by liquefied natural gas (LNG) filling stations for road trucks. An increasing number of these stations is operational in the Netherlands and they require activities such as transfer, storage, saturation and supply of LNG. Under the Dutch legislative context, facilities that handle or store large amounts of hazardous substances must carry out a quantitative risk analysis (QRA) for land-use planning purposes. The outcomes of the QRA determine the kinds of activities that are tolerable in the surroundings of the facility. The current method defines which release scenarios and frequencies must be used and how consequences of release scenarios must be calculated. The project was carried out by RIVM (Dutch National Institute for Public Health and the Environment) and DCMR Environmental Protection Agency and was supervised by an advisory committee. Designers of LNG filling stations supplied technical information.

In The Netherlands, legislation is in place that obliges facilities that handle or store large amounts of hazardous substances to perform a quantitative risk analysis for land-use planning purposesi. Off-site risk is expressed with two indicators: individual risk (IR) and societal risk (SR). IR is used to determine a zone where the presence of structures such as houses and schools is undesirable or unacceptable. SR is used to determine whether the remaining risk level, related to the number of people, present in the vicinity of the facility,, is tolerable. A method (hereafter ‘QRA manual’) is in place that prescribes how this risk analysis should be carried outii. Currently, the QRA manual deals with large chemical industries, pesticide storages and LPG filling stations among others. The method might have to be extended with LNG filling stations.

The use of QRA results for public decision making for current and future land use requires a method that is transparent and robust. The stakeholders must be able to verify the method and therefore only generally accessible data can be used for the derivation of release frequencies and for consequence calculations. The outcomes of the QRA should not depend on subjective choices of risk analysts or differences in software models. Therefore, the method to carry out a QRA is prescribed by legislation, including the prescribed use of the software tool Safeti-NL™ from DNV. In order to achieve coherence, the QRA method for LNG filling stations should follow the method for general chemical industries and LPG filling stationsiii where possible.

A reference LNG filling station was defined to develop relevant scenarios and frequencies. The various engineering choices for setting up a LNG filling station were taken into consideration when possible. An example of such an engineering choice is the transfer of LNG by using the pump on the truck or by building up a higher pressure in the truck vessel. Another choice is the pressure used for LNG saturation (9 and/or 18 bar) depending on the motor system of the truck using the LNG as fuel. Safety measures were identified and rewarded when possible. For example, using a composite material for the supply hose reduces the release frequency with a factor 10.

The activities that take place at LNG filling stations and the equipment that is used for these activities are listed in Table . Most activities are considered relevant for the risk assessment. Systems only containing gaseous (and not liquefied) natural gas do not have to be included in the QRA.

Table Relevance of various activities for the risk outside the facility

Table gives an overview of the equipment types for which scenarios and frequencies have been either investigated or copied from the existing framework. In the extended paper, all releases scenarios and corresponding frequencies will be reported. Also a number of conditions for which the described method cannot be directly considered valid will be listed.

The consequences associated with a release are calculated with Safeti-NL™ from DNV. The validation of the release models for LNG was supplied by DNViv. The largest consequences relate to flash fire and BLEVE of the truck. The amount of LNG that is released in case of a hose rupture was investigated in detail by RIVM.

For a typical filling station with an annual throughput of 5000 m3, the safety distance to be used for land-use planning can vary between 40 and 135 meter. The lower value applies to the situation of no external impact for the truck and the upper value applies to the situation where a ‘hot BLEVE’ of the truck is possible. The dominant events and corresponding consequence distances will be discussed in detail in the full paper. When compared to a typical LPG filling station with (with a comparable annual throughput of 1.000 m3) the safety distances for an LNG station turn out to be slightly larger.

Preview Presentation:
Presenter(s):
Edward Geus
Luc Vijgen
Albert Wolting
Once the content has been viewed and you have attested to it, you will be able to download and print a certificate for PDH credits. If you have already viewed this content, please click here to login.